Play DnD in Equestria with These My Little Pony Character Sheets

We battled a necromancer in the Moon Kingdom. We defeated owlbears at Hogwarts. Now, we’re bringing you to Equestria to battle it out as the Mane 6! Take a turn as our favorite ponies with these fandom character sheets for DnD 5e. If your DM won’t let you play in pony form, just say your playing as the Equestria Girls version, and explode a party canon in their face. Friendship is magic, every-pony!

The Princess Twilight cometh, behold! Actually, we decided to do these character sheets skewed towards the Mane 6 in the early seasons, so Twilight Sparkle isn’t an alicorn princess quite yet.

Twilight, the most studious of the lead ponies in My Little Pony: Friendship is Magic, is clearly a wizard. She primarily depends on her overwhelming intelligence and strong faith in her friends to make it through the day. Since “unicorn” isn’t a playable race in DnD, we’ve made Twilight a Forest Gnome. Gnomes get an intelligence boost, which is perfect for this purple pony! Twilight Sparkle represents the magic element of harmony. 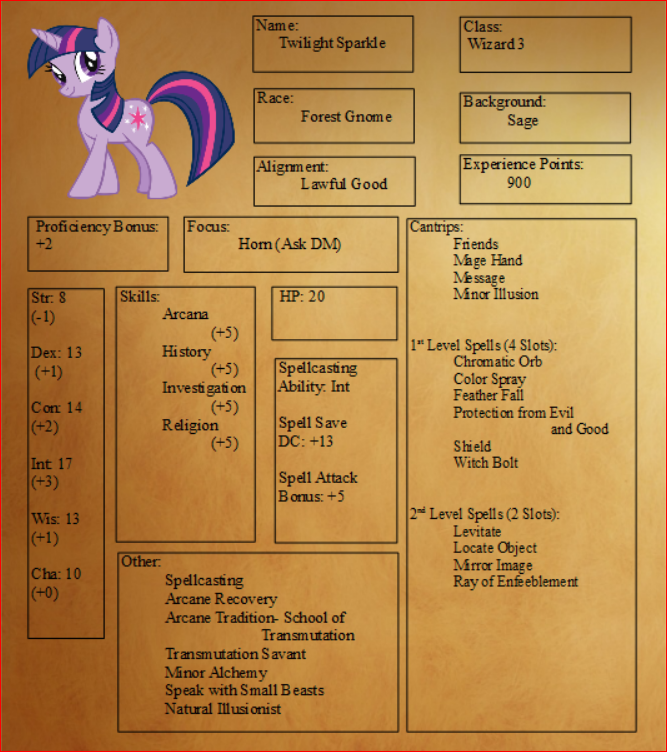 You don’t mess with the type of pony every pony should know, especially when her name’s Rarity. She is a cleric of the fashion gods. She’s not really seen as a fighter, but Rarity’s very supportive of her friends and willing to do what it takes to help them save the day!

Again, no unicorn PCs in DnD, so Rarity takes her place as a High Elf. She’s a bit full of herself and quite self-important, which plays well into the High Elf mentality. Since Rarity is known for talking her way out of situations, consider multiclassing Rarity as a bard at later levels. Rarity, despite her high view of herself, is very giving and represents the generosity element of harmony. 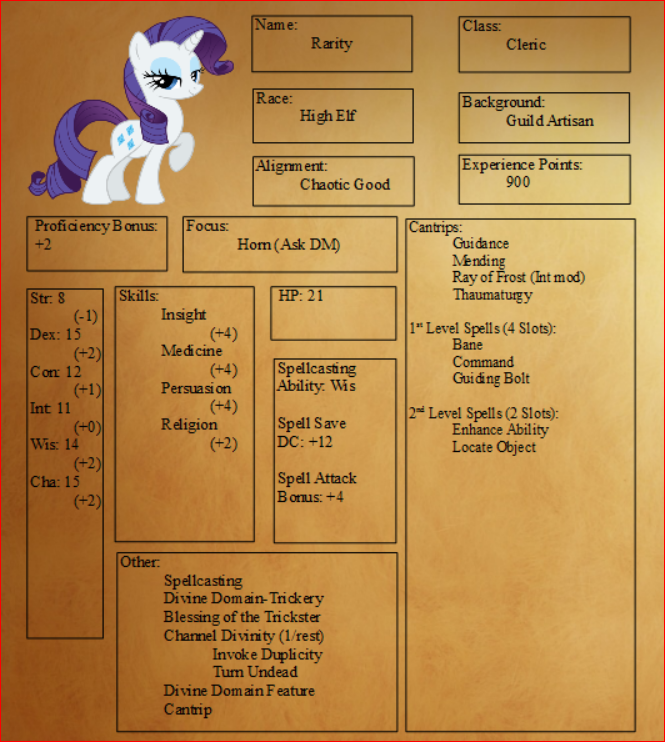 Applejack gets a special place in my heart. She’s the dependable pony who runs the farm for her family, the Apples. She doesn’t tend to get angry often, but she does depend on her brute strength when battling a foe (or harvesting apples).

Applejack is a Barbarian Hill Dwarf. This gives her bonuses in Constitution and Wisdom. As a barbarian, Applejack should take the totem warrior path and align herself with the wolf, as this alignment allows her to help her friends in battle. Nicknamed “Honest Applejack,” this pony represents the honesty element of harmony. 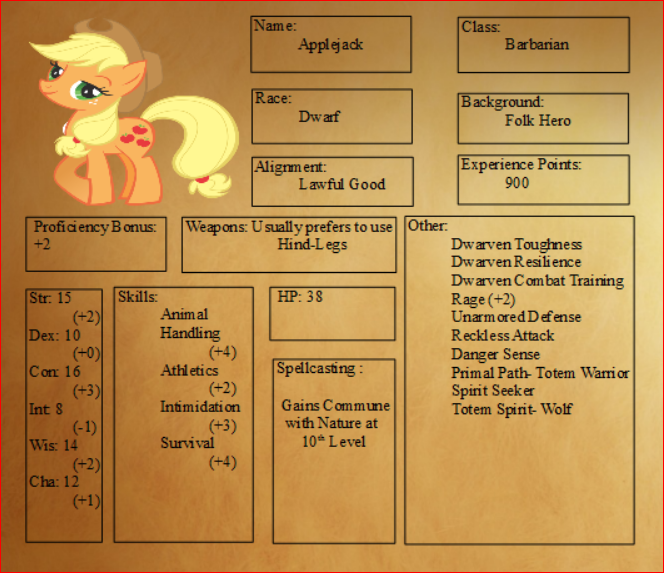 If anyone wants to play in Equestria with me, I claim Pinkie Pie for my PC. This is the party pony; the crazy pony whom everyone looks to to brighten their day!

Other than the main theme, Pinkie’s got the first song of the entire show and she never lets go of that musical spirit. As a Lightfoot Halfling, Pinkie fits in as jolly, boisterous, and gets charisma and dexterity boosts! Pinkie also has a strange 6th sense, so make sure the first 3rd level spell you add for the party pony is Clairvoyance. Pinkie Pie represents the laughter element of harmony. 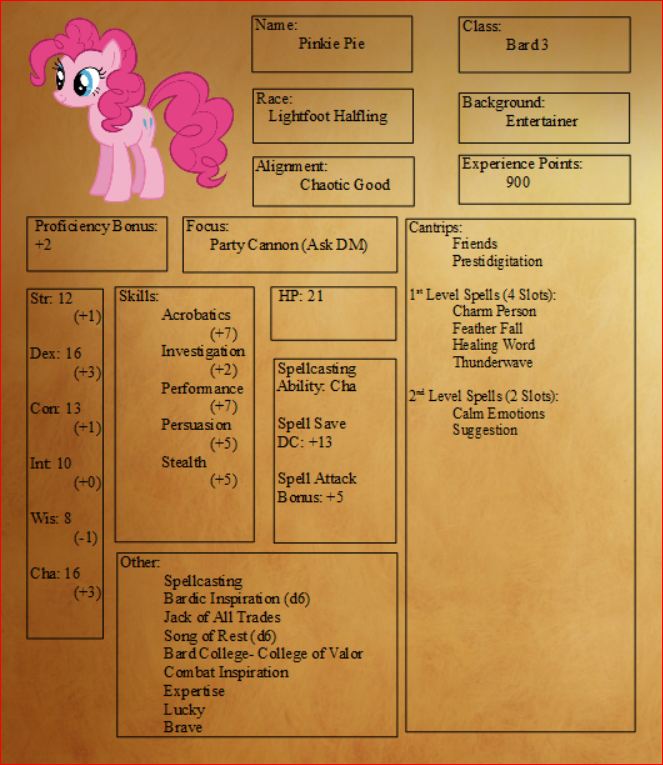 Rainbow Dash is a favorite among the bronies and pegasisters. Though the choice may seem strange at first, let me explain the brilliance of making Rainbow Dash a monk.

Monks have the ability to follow a specific monastic tradition and one path they can choose is the Way of the Four Elements. As Rainbow Dash works to regulate the weather of Ponyville, she needs access to elemental magic without the direct link to spells that a unicorn, like Twilight, has. By being a monk of the four elements, Rainbow is able to control winds, thunder, water, and more! As a half-orc, Rainbow gets boosts to her strength (something she prides herself on). Speak to your DM about customizing a Sonic Rainboom ability. Rainbow Dash represents the loyalty element of harmony. 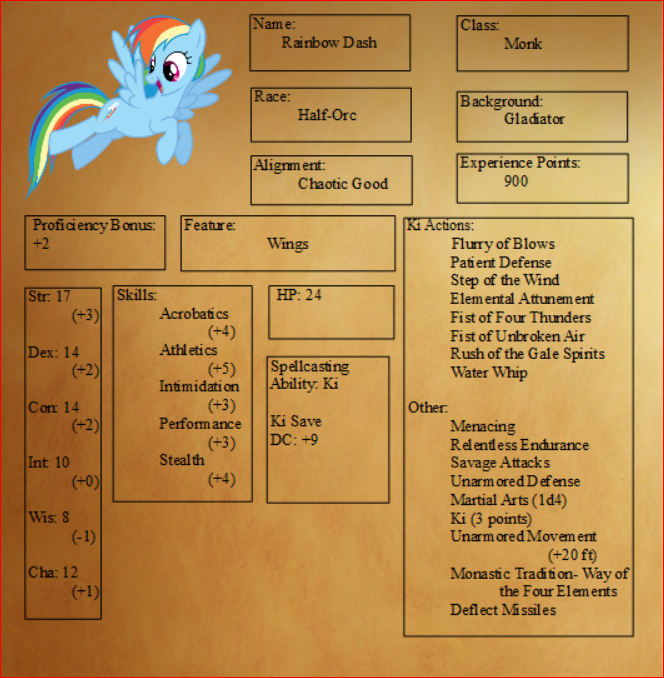 Fluttershy is an underrated but mighty pony! This soft-spoken pegasus loves animals and is often found nursing a woodland critter to health, so there is no class more fitting than druid when playing her.

Fluttershy would also be a Wood Elf, since, you know, you can’t really be a pegasus in DnD (unless your DM wants to customize that with you and, if so, invite me to the game please!). Fluttershy has a pet rabbit named Angel whom she loves dearly. Though druids don’t typically have companions, ask your DM to let you bring along Angel. Be careful though, this rabbit is persnickety. Fluttershy represents the kindness element of harmony. 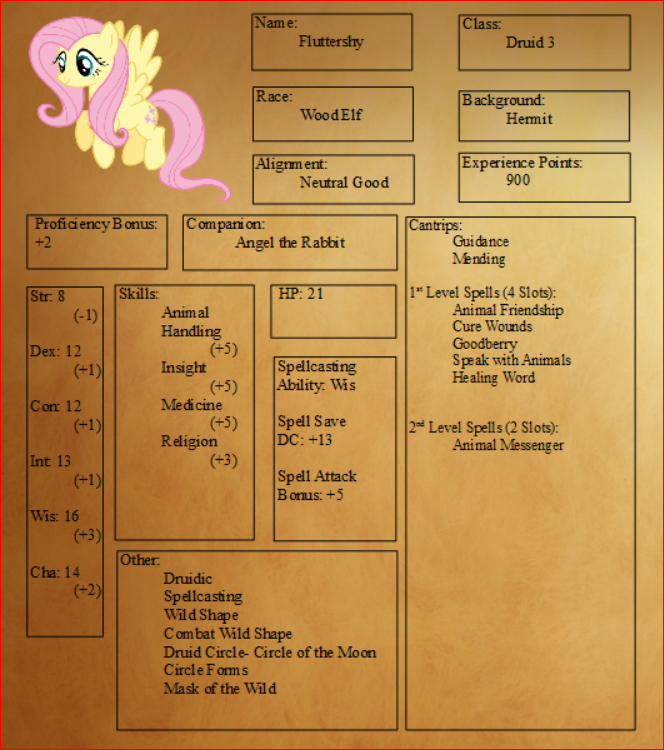 Now go forth through Equestria, conquering changelings and battling orcs! Remember to write a weekly letter to Princess Celestia, and if there are purple pigs flying upside down whilst playing chess, you’re probably about to battle Discord.

Who’s your favorite pony? Tell us in the comments below!


All Images Credited To: Discovery