The Dracula Dossier  is an award-winning campaign for Night’s Black Agents by Ken Hite and Gareth Ryder-Hanrahan. You’re super-spies, and you’ve discovered that Dracula is real and wants to have you for dinner. You’ll have to kill him first, and the only way to find him is to use the clues in Dracula Unredacted, the actual first draft of Bram Stoker’s novel, which is an after-action report from MI-6 of an attempt to use Dracula as a spy in 1898.

Oh, and the entire campaign is an improvisational sandbox. Following a tip in Dracula to Argentina may 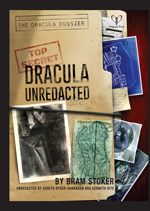 lead to nothing more than a cave of bats, but in another campaign, players may discover a colony of ex-Nazis, or perhaps “Guantanamo Bay for vampires.” The GM decides on the fly based on what is right for her or his campaign.

That sounds cooler than a scoop of vanilla at the North Pole, right? But where does one find the time to play such an epic and neuron-blasting campaign? I have been running a Dracula Dossier campaign for the last 14 months, and we are at last approaching an end. Dracula Dossier co-writer Gareth Ryder-Hanrahan is trying out a solution.

At Gaelcon, Ireland’s premier gaming convention, the notorious GRH is running a truncated version of The Dracula Dossier in 15 hours over three days.

What motivated him to try such an insane gaming stunt?

He said, “The multi-session format has been knocking around the US/UK con circuit for a few years. In particular, I was inspired by Steve Ellis’ game at LongCon 2.” LongCon is an English gaming convention where instead of playing a game for four hours and then stopping, the games go on for days.

To keep his players on their toes, Gareth has “sketched out some plot twists that aren’t in the book, and I have a rough idea of where the first two sessions will go. Before the con, I’m going to buy a cheap rucksack and fill it with props- the Unredacted Dracula, obviously, but also other documents from The Hawkins Papers [A supplement of nothing but gorgeous handouts for the campaign], and a few other things. The players will get their hands on that in the first session.”

The cherry on top of a Dracula Dossier campaign is of course the opportunity to take on the man himself. Even with just a weekend to play the game, that’s not off the table for these lucky players. Gareth said, “It’s an improvised campaign – if they follow the right clues and choose the right paths, then they can find Dracula anyway. Killing him is up to the dice.”

One of life’s chief’s problems for gamers is finding the time to play. By playing long hours over just a few days, this problem can be solved. And more games make for a better life.

Could you game out an entire campaign in a weekend, or is that too insane for your tastes? Let us know in the comments below!