by Rosie Knight
Pinky Malinky is a lot of things; a brand new cartoon from Nickelodeon and Netflix, a cute technicolor mockumentary about growing up, and did we mention it’s also a show about a talking hotdog who lives in a world otherwise filled with apparently ordinary humans. You can check out the first trailer for the outrageous new show below.

On first glance the show seems to sit somewhere in between The Amazing World of Gumball and Spongebob. TheÂ teaser introduces us to Pinky, anÂ anthropomorphic Hotdog who–according to the trailer–exists due to a genetic mutation that made his family delicious meat snacks. Voiced by High School Musical’s Lucas Grabeel, Pinky is a cheery fellow who’s endless optimism is at the core of the show, just like a certain square-panted deep sea dweller. 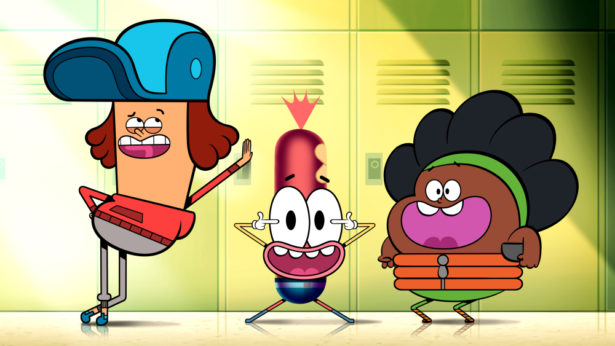 Following Pinky and his friends as they make their way through the trials and tribulations of school and being a kid, the new cartoon this seems like another fun addition to the contemporary canon. The documentary style show focuses on the talking hotdog and his friends Diamond White’s Babs Buttman and Nathan Kress’ JJ Jameson as the trio film their antics and try to become popular by climbing the social ladder. It looks like it’s going to be a lot of fun, and incredibly strange, especially with a few moments of the grotesque featuring Pinky peeling off his own hotdog skin to reveal the squishy pink meat inside. Delightful! You can get your talking Weiner fix when the show debuts onÂ January 1, 2019.