PETA Is Right: Fur in Warhammer 40K Is Murder But Not For Why They Think - Nerdist

PETA Is Right: Fur in Warhammer 40K Is Murder But Not For Why They Think

PETA has sent a letter to Games Workshop CEO Kevin Rountree asking they stop featuring fur on the miniatures. It’s a bit of a head-scratcher as to why they would reach out to a company whose products are  minis cast in plastic and resin but they simply state that, “Warhammer features an abundance of characters who wear what appear to be animal pelts.” It is in line with their position that fur is murder, but in pivoting to talking about the fur industry in its present state in our reality doesn’t really express an understanding of what the fur of the 40K universe is, or where it is coming from.

There are no wolves on Fenris. That line is often repeated without context, because there are absolutely creatures that resemble giant wolves on the home planet of the Space Wolves chapter. The insinuation reveals a much darker truth: like soylent green, the wolves on Fenris are people. 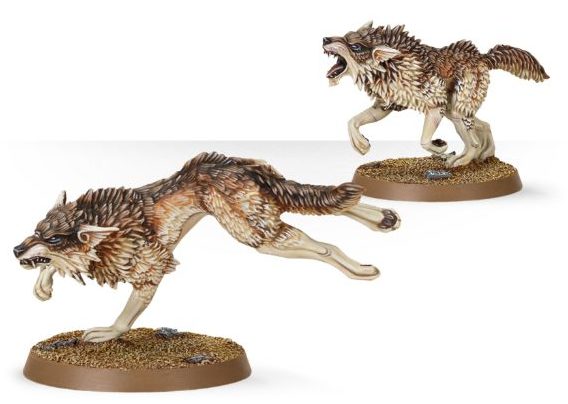 There’s a lot in the 40K lore that explains this, but reduced to its most simple, it’s the gene-seed of the Space Wolves. The process by which Space Wolves chapter Aspirants go through to become a space marine is brutishly harsh, beginning with being injected with the first strand of the Canis Helix gene that has mutational qualities. It’s why a lot of Space Wolves themselves sport animalistic features, like fangs and fur where there shouldn’t be fur.

It’s called the Test of Morkai. After being injected with the strand, Aspirants are then thrown out from the Space Wolf fortress of Fang into the wilds of Fenris, and have to return having survived both the biological process that the gene-seed injection causes and the wilds of the harsh world, including bitterly cold weather, carnivorous plants, and predators like huge Fenrisian Wolves. Aspirants who survive all of that risk succumbing to the Curse of the Wulfen. Either way, the process of becoming a Fenrisian Wolf or a Space Wolf is a painful one, as new organs and bones grow with your DNA being reprogrammed  in order to turn regular people into 8 feet tall, acid-spitting super warriors. The Test of Morkai is like the worst kind of puberty ever, in the worst environment, over a period of days rather than years.

The process by which the wolves on Fenris are created is very much in line with the kind of suffering that PETA abhors and protests. Am I surprised that PETA has taken issue with the fur of 40K? Not even a little, though I am surprised both that it has taken this long and that they haven’t tried to address the overall trend of murder as fashion in the 40K universe. Necron Flayed Ones wear the skins (and even the bodies) of their human victims. A recent Sister of Battle miniature released has a pair of human skulls as bra cups (and if the skulls of heretics are more comfortable than underwire bras, I don’t blame her).

So yes, PETA is right. Fur is murder in the 40K verse, but in this case, Games Workshop took that idea and made it even more grimdark.

What do you think about PETA’s approaching game makers to remove depictions of fur? Let us know in the comments!

Teri Litorco is a mini wargaming fangirl, author of The Civilized Guide To Tabletop Gaming, and overshares photos of her games, miniatures, and cats on social media.