Steel yourself, adventurer, because your wildest dreams are about to come true! Acquisitions Incorporated is on the hunt for new talent, and they need you—yes, YOU!—to join their ranks. Choose the right job for you and you can become an invaluable member of your own local franchise. Join the likes of Omin Dran, Jim Darkmagic, and Viari on June 18 as they help guide you on your new life as a member of Acquisitions Inc.

The first officially licensed third party Dungeons & Dragons campaign book, Acquisitions Incorporated is based on the long-running, hilarious campaign of the same name from the creators of Penny Arcade. Inside its pages you’ll find eight corporate positions for player characters, details about starting a franchise for fun and profit, and an adventure that can take characters from levels 1 through 6. 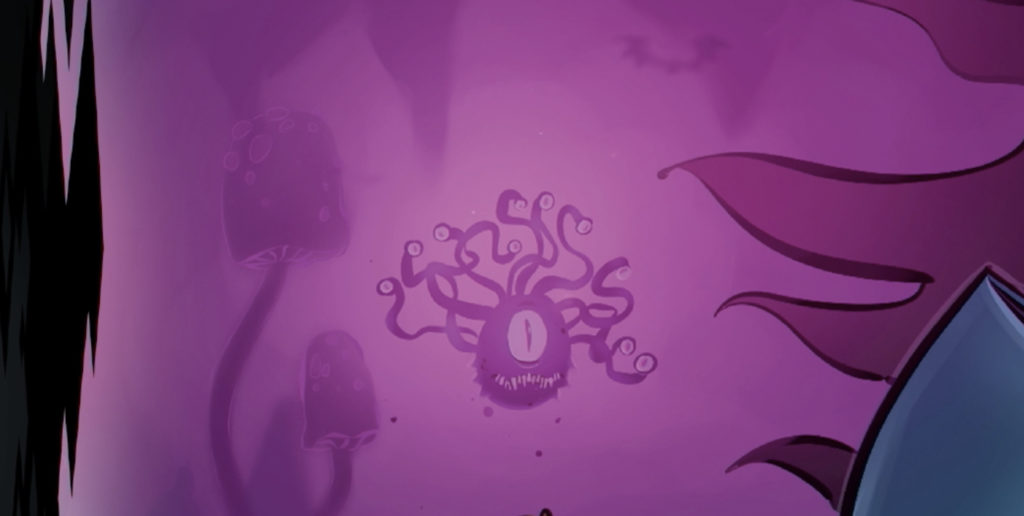 (Just look at that happy little beholder from the back cover, illustrated by Mike Krahulik. How can you resist that guy?)

Penny Arcade’s Jerry Holkins and Elyssa Grant chatted with Geek & Sundry about how the book got started, how to use it in your own campaign, and the talented writers and artists who contributed to its creation.

Geek & Sundry: You’ve mentioned that the Acquisitions Inc. book was originally developed as a Kickstarter project. What inspired you to go that route at first?

Jerry: Well, the main thing was that we had big plans – we wanted to make a book that would feel like it was of a piece with the official D&D supplements on your shelf. That meant a couple things: figuring out how many people would want it, and figuring out how to pay for it. Kickstarter sort of does both of things at the same time. So we let Wizards of the Coast know we were thinking about something like that, and a little while later they asked if we’d thought about doing the book through them instead, as an official book, which was more or less the fulfillment of a life-long dream. So, yeah. We went that way.

Would you say any familiarity with Acquisitions Inc.’s previous adventures is needed to get the most of the book?

Jerry: I think that if you’re familiar with the kind of stuff we’ve been getting up to over the ten-year run of the show, there’s gonna be a lot of callouts you’ll appreciate – but I’ve owned lots of D&D books, going back real, real far, and the ones I like best were the ones that didn’t simply give me more stuff but gave me a different lens through which to view my collection and the things I know already. This book does that, too.

Do you feel this book lends itself particularly well to more lighthearted or humorous campaigns?

Jerry: Definitely, and that’s a tone we investigate a lot in the stage shows. It’s something that people definitely seem to enjoy. But I also run Acquisitions Incorporated: The “C” Team, a spinoff of the main stage game, where we use the humorous aspects of our weird, medieval office comedy toward some pretty dark themes. Those themes then crept back into the main game from there. One of the cool tricks about a campaign like that is that, when you really want to twist the knife, players never expect it. 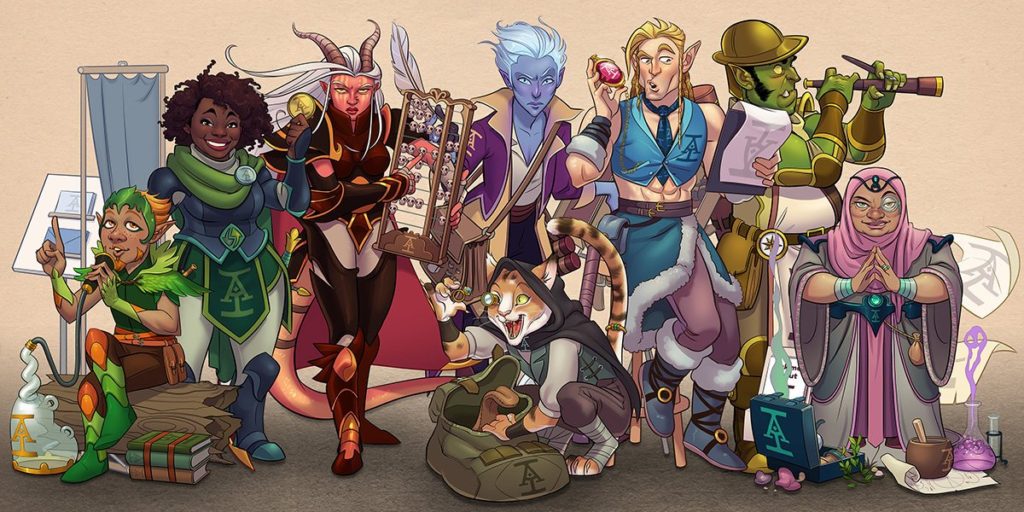 Do the corporate positions replace a character class, or supplement existing player classes?

Jerry: The best way to think of our corporate roles – something like your “job” in an Acquisitions Incorporated franchise – is as a delicious frosting on top of your existing class. It doesn’t override anything about your base class, and only serves to add cool flavor, extra capabilities, and a responsibility at the table that helps set you apart. They can level up with performance, deliver more powerful abilities, all the classic Level Up moments you like about a class, but with its own little track.

Is there any part of the book that’s particularly near and dear to your heart?

Jerry: Gosh. I mean, it’s been a yearlong labor of love putting all this together. We had a chance to do the whole thing exactly how we wanted to. But the main thing for me is the scale and talent of the team that built it. My fantasy is that I’ll get a chance to do another book with them, someday. 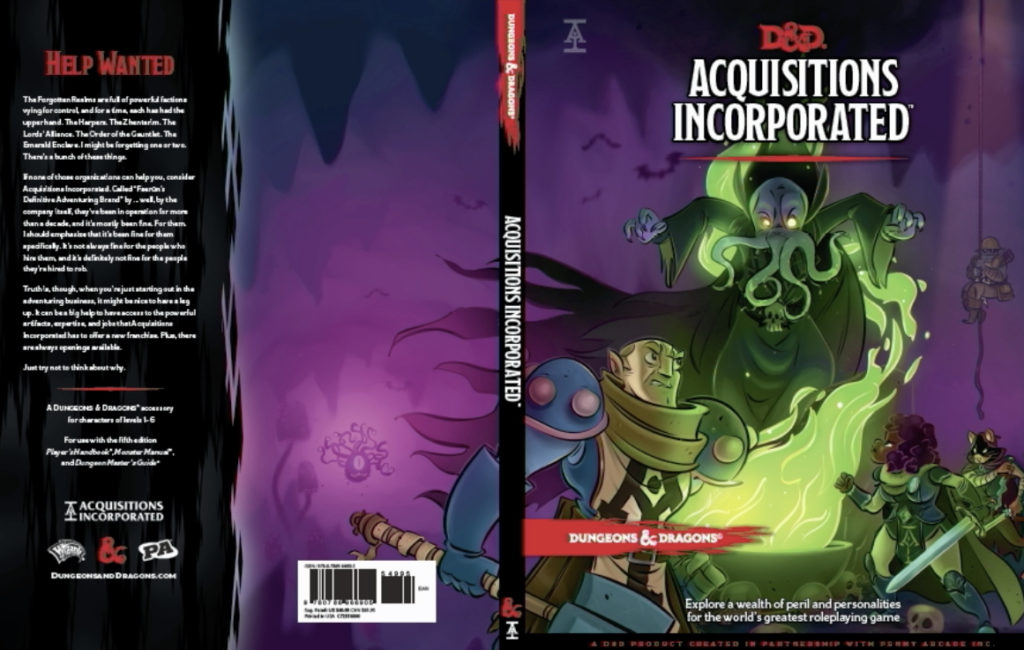 Can you tell me a little more about that team?

Elyssa: We worked with collaborators with a vast array of experience, perspective, and even geographic location. A good portion of the Penny Arcade team worked on this book in some capacity, with Jerry Holkins as one of the Creative Directors, and Francisco “Kiko” Villasenor and Mike Krahulik as Art Directors. The Wizards of the Coast’s D&D team of Jeremy Crawford, Shauna Narciso, Bill Benham, Dan Tovar, and more worked closely with us throughout the project to make this a true collaboration between the world of D&D and Acquisitions Incorporated.

Scott Fitzgerald Gray, our Managing Editor and one of our Creative Directors on the book, has worked on almost every recent D&D book as either a writer, designer, or copy editor. Our two main writers, Shawn Merwin and Teos Abadía, have worked on many modules, including the Acquisitions Incorporated module release of Cloud Giant’s Bargain, as well as contributed to organized play materials.

The majority of our Acquisitions Incorporated players have contributed as writers, with Amy T. Falcone designing the textures and general look and feel of the book, and Kris Straub created illustrations for the book.

The book includes over 100 illustrations in several different styles. Our goal was to create a book with the look and feel of both D&D’s high fantasy style and Penny Arcade’s more comic or illustrative styles. Our team ranged from artists such as Aviv Or, who designed our iconic job position characters, to cartographers like Jason Engle, to high fantasy artists such as Tyler Jacobson, Daarken, Carmen Sinek, and Leesha Hannigan, Michele Giorgi, and many more.

Do you have any tips for a brand-new Dungeon Master using this book to run a campaign for the first time?

Jerry: One of the cooler things about the book, I think, is that its tone is really established early on to invite the reader in – whether they’re a player, or a Dungeon Master interested in the systems that manage franchises or the campaign at the end that brings it all together. The language is clear, but friendly – with the kinds of suggestions you’d offer a friend for their campaign. But the main thing to keep in mind is that players are going to love their franchise, and want to take care of it. And one of the ways you can make that really sing is to deliver great NPCs that work for it – they’re helpful, but they’re also a great way to personify certain aspects of the company that players will love to come back to.

Join the ranks of Acquisition Incorporated this summer for a retail price of $49.95.

All Images: Wizards of the Coast / Penny Arcade

Illustrations by Aviv Or and Cover Art by Mike Krahulik