Peering into the Singularity: What's on the Horizon for Tabletop - Nerdist

Peering into the Singularity: What’s on the Horizon for Tabletop

A few weeks ago, I went to the horizon of board-gaming and gazed over the edge to see some of what we can expect in the next year or two, and there was a bounty to behold. The UnPub Expo is a game convention where up-and-coming games go through two days of play-testing with the public to iron out any kinks.  The con was full of awesome new titles and game-designer celebrities, and was a very poignant demonstration as to why we are in a golden age of board-gaming.

It looks like the next year will see several expansions for popular games that have recently come out. Scythe is a new 4x game set in alternate history Europe which just had a successful Kickstarter, and we already have a glimpse of an upcoming expansion. Designer Ben Rosset was there testing two expansions for his gaming hit Between Two Cities, called Between Two Cites: 1850 and 1900 offering new rules and building types. 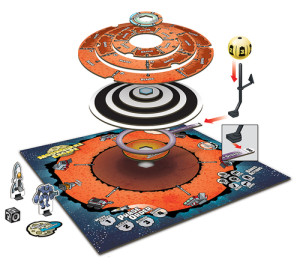 Colored cubes may never go out of style, but the age of the high-production-value component appears to be upon us. Night of the Saucers drew attention with a gorgeous saucer laying waste to the table top (pictured in the featured image above). MoonQuake Escape featured a Rube Goldberg-esc lazy-susan centerpiece that rivals Tzolk’in as having the neatest spinny-thing in a game (sorry Dreidel, you had a great run though).

I was lucky enough to try the fun cooperative tile-laying game Unknown, where we faced shambling monsters, infernos, and starvation as we tried to relocate our base in a post-apocalyptic and cavernous world. Unknown just got published after having a successful Kickstarter about a year ago, and exemplifies one of the big reasons we are in a golden age of board-gaming. Now, there are a multitude of brains thinking and designing, brains just like yours, and crowdfunding has allowed this bottom-up production flow to give us a huge diversity of great games. 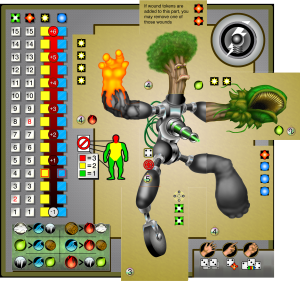 At the con, the prettiest game in the room was definitely Body Shop, which was being put through its paces by designer Mark Belkowski. Players place cards of different body parts on paper-doll playing-mats to frankenstein up a monster that they then put in an arena to fight. I talked with Belkowski on the first day of play-testing to get the low-down of his game, and then I checked with him at the end of the convention. “I saw players laughing and having fun as they played,” he reflected, “but I also saw my mechanics work over and over again for two days straight, and I realized the game system could use a little polishing. When I put this out on the market I want to get it right. I still have some development to do before its ready, but it’s really exciting to think what the final product will be.”

One of the unique things about the UnPub Expo is, not only was there a huge diversity of games to see and play, but you may find yourself playing across the table with some living legends of game design. Daniel Solis, whose game Trickster will be coming out with an updated version in autumn, was lucky enough to test it out with Eric Lang (Blood Rage, XCOM, Arcadia Quest, Quarriors!, Star Wars: The Card Game, A Game of Thrones: The Card Game, and more) and Rob Daviau (Pandemic Legacy, HeroScape, Buffy the Vampire Slayer: The Game, and many more). The two game-design gurus were there for panel discussions, but also testing out some projects that they were working on, and playing elbow-to-elbow with the next generation of up-and-coming designers. 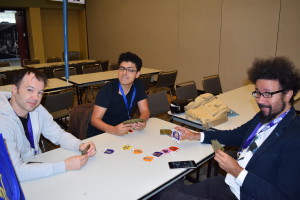 The main convention drew about 2,000 playtesters this year, with about 150 designers and titles to test out. Admission is FREE for players, so, for two days of fun, it’s a great deal. While the main convention is in Baltimore (the next one is the weekend of March 17th, 2017), there are regional UnPub-mini conventions all across the country. If you are keen to get involved, you can find out more details here. If you like tabletop gaming, come out and support this grassroots design that has given us such an embarrassment of riches for game choices.