Getting to Know Golarion: The World of PATHFINDER - Nerdist

Getting to Know Golarion: The World of PATHFINDER

Pathfinder’s Knights of Everflame is a Pathfinder Second Edition campaign written and run by Jason Bulmahn. A group of five strangers who board a caravan heading to Lastwall, an ancient kingdom watching over the grave of a long-dead menace… you can find them on Tuesday evenings over at Twitch!

Pathfinder’s Second Edition book is a behemoth core-rulebook that should be classified as a weapon in its own regard. At six-hundred and forty-two pages, the rulebook is jam-packed with art, rules, character info and (most importantly for this article) setting information. Pathfinder is set in on the planet Golarion during the Age of Lost Omens. An ancient world, with a rich diversity of cultures, makes character creation and adventuring exciting. A case could even be made that players should avert their eyes from Chapter eight of the rulebook…but… let’s peek anyway.

Humans typically notice things in the middle first and Pathfinder’s map in chapter eight puts the Broken Lands and Eye of Dread right there. The Shining Kingdoms and Old Cheliax are also smack dab in the middle with the High Seas… and… these names mean nothing. Names without context on a map don’t mean anything, but they might inspire wonder. Players might look at the Impossible Lands and wonder what the Mana Wastes are, or even ask questions if a hurricane Eye of Abendego exists all the time.

Let them wonder… because all of that is just one continent, and only one planet.

Pathfinder is a great game for exploration (given its namesake), and I’d even give their characters a map of the world so they could wistfully dream of traveling to the faraway lands of the Linnorm Kings. Before that, let’s take a look at some of Pathfinders best examples.

Aviston and the Eye of Dread

Take your wooded medieval setting, mix it with a healthy dose of hobgoblins, and then trap an ancient lich beneath it and you’ve got a solid campaign setting. Then wait a few centuries and let people build culture, install a few magical towers, and throw a few demons into the mix and it sounds like a fantastic place to live. Right?

Avistan is a major continent in the Inner Sea region and is a thriving hodgepodge of kingdoms, military nations, and people who take their freedom seriously. In the center of which, exists an Isle of Terror where the Whispering Tyrant (that ancient lich) rules a kingdom of undead that puts every other nation on edge. The possibilities for playing a political game within Aviston are dripping with infernal options. With every nation on edge; alliances can form and break easily, and one moment enemies may find themselves sudden allies against cosmic horrors.

Somehow merchants get through this. They should really pay adventurers more. 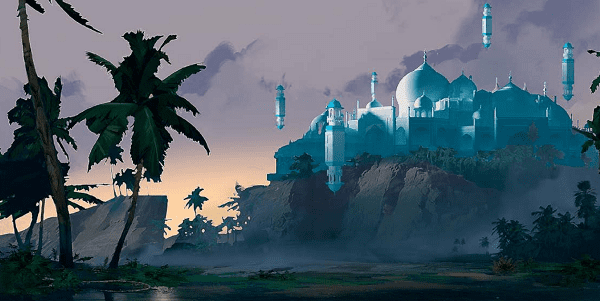 The Impossible Lands is further southwest and is a land where magic reigns supreme. The writers of Pathfinder struck campaign-gold when writing the Impossible Lands. In their example kingdom of Geb, undeath is the primary form of life. The living are the minority. Not in a “there are hordes of mindless zombies,” kinda way. Rather in that everyone decided to use magic to be undead. Why worry about petty things like eating or lesser bodily functions when you can become ghosts? Sure their lands may be ruled by a ghost that happens to be a violent and petty undead dictator who has ruled his lands for thousands of years—but at least they don’t have to live under Nex.

Nex is their neighboring kingdom (and also named after its ruler who is still alive after thousands of years). A cosmopolitan realm where magic is so mundane, flesh warping is a legitimate business enterprise. Golems walk the street, and homunculi might run cafes that are floating off the ground. Both are civilizations where there are no rules about magic so the campaign possibilities are endless. Between the two nations lies the Mana Wastes, your typical blasted and blighted badlands formed by ancient wars between two kingdoms sits square in the kingdom. Mutants and other oddities roam the ruins to scrape by on what’s left, but hidden within is the duchy of Alkenstar. A budding technological empire that is home to metallurgists and machinists that have begun exporting firearms out to the world. 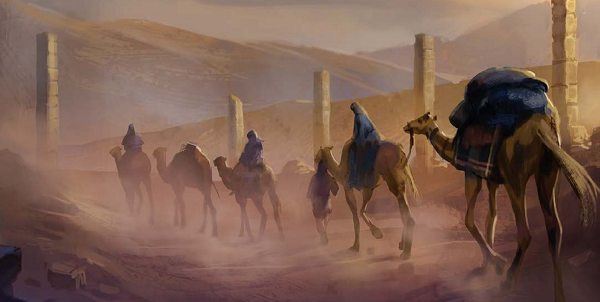 The shining sands and great pyramids (not to mention camels) paint a familiar picture to us. We’d assume a region devoid of population, with great ruins worthy of treasure hunters, and long-dead deities. We’d assume wrong. The Golden Road is an economic powerhouse in Golarion. The center hub for trade between other continents, and other planets, the Golden Road is home to the oldest nations in the Inner Sea region. The largest is Katapesh. A diverse mercantilism empire that is overseen by the ruling guilds of Pactmasters, a traveler can find anything legal or illegal.

In other cities, you’ll find city-states that grant you immortality, or grand worship of gods and industry to build world-wide wonders from nothing. Yet at the center of the Golden Road lies Osirion. An ancient city, monuments of its early days still stand and are a center of its pride and identity to the people and culture that thrive there. Osirion is home to those artists, philosophers, and spellcasters that would thrive in an empire surrounded by shifting sands.

How is a place like the Golden Lands so different than logistical reality? Pathfinder’s setting takes into account the very magic and classes that inhabit the world. Rather than traditional medieval fantasy-fare which features basic peasants with a few iconic PC champions—Pathfinders setting is a fashionable playground.

What’s your favorite Pathfinder Kingdom or Plane? Let us know in the comments below!