Game Master Jason Bulmahn leads a group of five strangers (Gina DeVivo, Jeremy Steven Walker, Aki, Erika Fermina, and Rachel Seeley) who board a caravan heading to Lastwall, an ancient kingdom watching over the grave of a long-dead menace. Watch Knights of Everflame every Tuesday!

It’s exciting to see our heroes take the new edition of Pathfinder through its paces in Knights of Everflame. One of the best parts of Pathfinder is its dedication to building campaigns that any GM can use. Pathfinder Adventure Paths include everything needed to experience the thrills of an adventure in Golarion released on a regular basis to keep new ideas coming and spoilers out of curious players’ hands. Paizo even offers a subscription to Adventure Paths so they show up in the mail just in time for the next bit of story to unfurl at the table.

Age of Ashes is the first adventure path built for Pathfinder Second Edition, but there are several Adventure Paths out for the original edition that are excellent sources of campaign ideas. This list focuses on our favorites; be sure to tell us about yours in the comments!

Rise of the Runelords 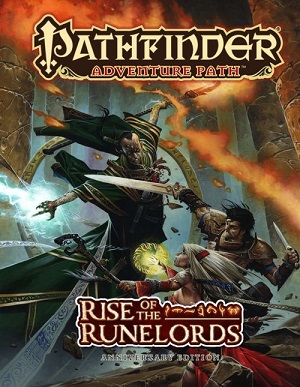 Rise of the Runelords was the first Pathfinder Adventure Path that started it all in 2007. There’s a reason it’s been rereleased in an anniversary edition, used as the first campaign in the Pathfinder Adventure Card Game and even turned into an audio drama; it’s really solid. The heroes start out by defending the small town of Sandpoint from a goblin attack and ends by throwing down with one of the titular Runelords to keep them from returning. It captures the development of heroic power that Pathfinder players love with a classic opening and a powerful ending. 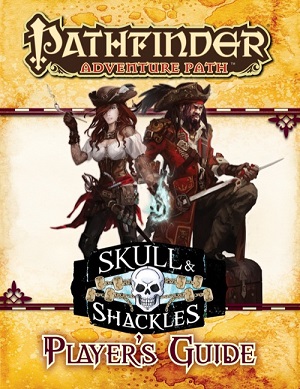 Everybody loves pirates! Skull and Shackles starts off with the players pressed into service as lowly deckhands but soon finds themselves in charge of a pirate vessel sailing the seas for plunder and excitement. This adventure path lets players decide if they want to be noble pirates or scurvy sea dogs with a reputation system that offers mechanical benefits to acting heroic or villainous. The characters must also unite their pirate brethren to face off a naval take over of the free islands with rules built for massive ship combat! 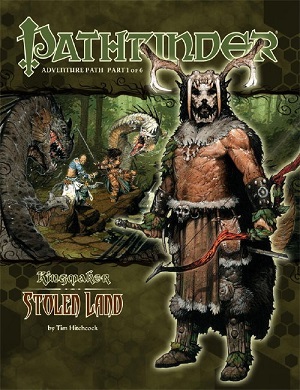 Once the adventurers have cleaned out a couple of dungeons, they need a safe place to store all their loot. In Kingmaker, they get a castle that they can build and upgrade.  But with more gold pieces come more problems as they have to rebuild not just the castle but settle the political issues and monster attacks that always seem to come with homeownership. This one is also available in different editions to experience; a video game edition from Owlcat Games and a crowdfunded second edition using Pathfinder Second Edition rules, due out next year. 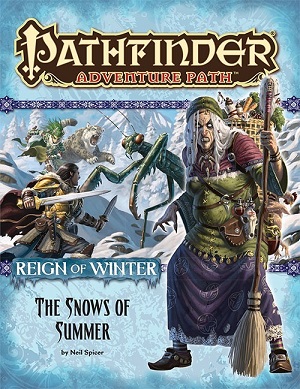 Many of the Adventure Paths center around a theme, like the Egyptian style adventures of Mummy’s Mask or the monster centric ideas of something like Giantslayer. Reign of Winter has a heart of ice thanks to its central villain, the legendary witch Baba Yaga. This adventure path made this list because of a fascinating twist. The quest to defeat Baba Yaga sends the players into some unexpected locations that stick with the theme, such as an ice planet in Golarion’s solar system and even our own world during World War I. The players must face off against a brutal villain from Earth’s very real history; Grigori Rasputin. 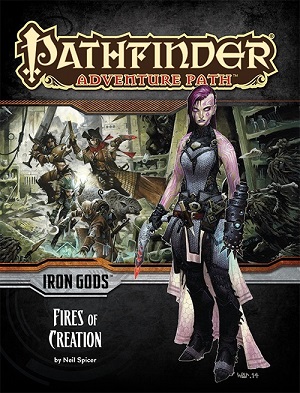 Our last entry on this list blends fantastic technology with high magic. Iron Gods allows the heroes to face off against killer robots, mad AI and all sorts of science fiction villains to keep players on their toes. When a long-dead spaceship that crashed on Golarion centuries ago starts reactivating, the heroes must prevent the rebirth of a villainous artificial intelligence and keep a technology cult from taking over the land. This path is a great switch up for a long-running campaign, a chance to mix in laser pistols and jetpacks with magic items and abilities or even as a bridge between Pathfinder and Starfinder that takes the heroes into space!

What’s your favorite Pathfinder Adventure Path? Let us know in the comments!