Passion For Games And Community Has This Game Store Giving Back

With International Tabletop Day around the corner, we’re counting down the days to the big celebration by highlighting friendly local gaming stores and their awesome stories. Be sure to find an ITTD event near you so you can enjoy the festivities in your community.

Broomfield Colorado is a small town, nestled in the midway point between Boulder and Denver. With a small population and being cut in two by the Denver-Boulder Turnpike, it’s easy to think that Broomfield is nothing but another small, suburban town. The truth is that Broomfield has an incredible secret and that secret is Total Escape Games. John Stephens, general manager, is also incredibly modest about his store, “I had to ask other retailers what makes us special, and I’m honored to have friends like Travis Parry at The Nerd Store up north in Greeley, because he was able to tell me what it is when I saw him at the GAMA Trade Show in March. Total Escape Games is special because people love the staff here.”

It was also at GAMA that Total Escape Games was recognized for their excellence when they won a Power Retail Award for marketing. “I thanked my staff by saying ‘If your staff sucks, you suck’, and I’m super fortunate to have a group of gregarious, or at least willing to fake it, staff members who are typically excited to be at work and excited to help you.”  John has strong feelings about his staff and the way he wants to position his store for success, “I firmly believe that with outside price pressures and the myriad of shopping options in this area the only way to make people come into your shop is to firmly embrace ‘Third Place Theory’, and that comes down to engaging with your customers regularly, learning their names, knowing their game preferences, and being part of their lives. I’m old enough to remember the old sitcom Cheers, and that, combined with a little High Fidelity, is the customer service model we strive for.” 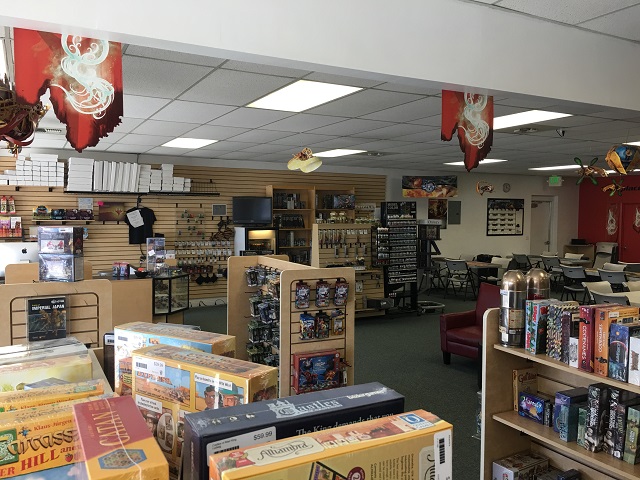 “Total Escape Games is also a big part of Broomfield,. We’ve been part of Extra Life the last two years, and have worked with a local organization called Gamer’s Giving to raise money for a local raptor rehabilitation program, a local food bank, and for medical treatments for the child of a longtime member of the Denver gaming community. Every day the community gives to us, letting us do what we love, so it’s important to me that we get to be part of the community in different ways, and charity is a big part of that.”

This charitable attitude and desire to support the community extends beyond gaming. “The other way we’re seeking to give back is through sharing opportunities, and right now we’re in the middle of planning an art gallery opening. We’re thrilled to bring local artists from Colorado into our store and provide them places to display and sell original artwork. I’ve done a lot of different things in my life, but this will be the first gallery opening I’ve planned, so we’ll keep our fingers crossed that the customers love it, and that the artists benefit from it.” 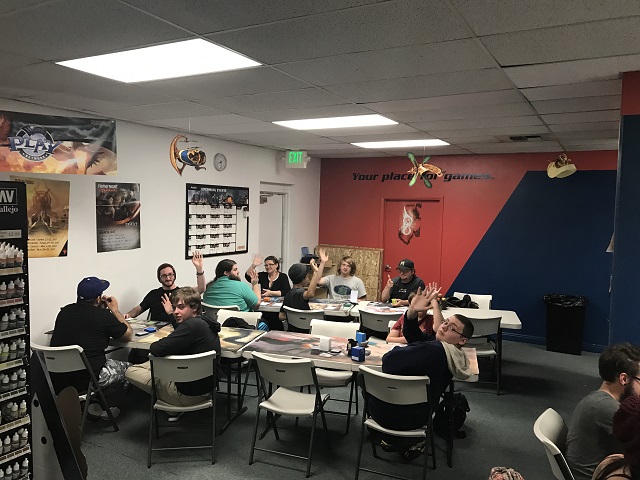 “How did I get here? Oh yeah, it was completely on accident. I was contemplating a return to the night club industry and was a weekly Magic player here at Total Escape when I got a call that they needed part-time help. What started out as a part-time job became a full-time management job, and then the owners slowly moved into retirement. I’m fortunate enough to get to run a shop where I have the trust of ownership and they don’t need to be here on a daily basis.” John is proof that the right kind of attitude, along with a strong desire to be a part of the community and give back to it are exactly the things that make Total Escape Games Broomfield’s best kept secret. Now that you know how awesome John and the store are, get the word out.

Total Escape Games is located at 6831 W 120th Ave, Suite C, Broomfield, CO. You can visit their website and find them on Facebook.

Do you prefer game stores that try to build a personal relationship? Let us know in the comments!