Op-Ed: My Favorite Topic in Video Gaming: THE LAST OF US - Nerdist

Op-Ed: My Favorite Topic in Video Gaming: THE LAST OF US

Whenever a conversation arises that’s remotely related to video games, I start to tremble with excitement. It means I can recommend Naughty Dog’s The Last of Us! Seriously, I don’t talk that much (hence the trembling), but I just cannot control myself when it comes to this game. I’d heard ridiculous high praise about it before I got stuck in, but nothing could prepare me for the incredible story-driven, cinema-like nature of the game, and characters that you genuinely care about right from the moment they start walking and talking. I used to rush home from work to watch an episode of TV, or throw on  a movie, but The Last of Us quickly replaced all that. 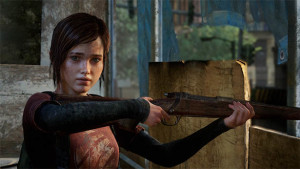 It’s set in the post-apocalyptic wasteland of America, where a mutant fungus has ravaged everything, and transformed humans into cannibalistic monsters. Okay, with that description it sounds like death and destruction will play a big part in the gameplay, but it really doesn’t, because the zombies are not the focus of the game at all. You play as Joel, a guy who carries a ton of emotional baggage after losing his daughter, Sarah, years prior. I’ll say that when that happened, I felt personally responsible. Like I failed to keep Sarah alive, and now I’m bonded to Joel forever. In that sense, the game trains you to think and react like Joel early on, which makes your investment in his character very significant. One night during a routine smuggle in a Boston quarantine zone, Joel meets a teenage girl called Ellie. She claims she’s infected with the virus but hasn’t experienced any symptoms, so it’s possible she’s immune. Believing that Ellie is the key to saving humanity, Joel risks his life to escort her to Salt Lake City.

Their journey to stay alive is a wild adventure that sees Ellie and Joel horseback riding through mountain tops; tip-toeing through deserted museums, houses and churches; sprinting through forests; cowering in infested bookstores; and holding their breath during stealth kills. All of that is exceptional and stunning, but it’s the nuanced character progression that happens along the way that makes the game so memorable. 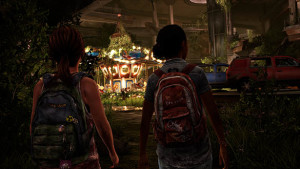 As well as the obvious thrill of the main game, The Last of Us also has brilliant downloadable content. The Last of Us: Left Behind is a prequel to the main storyline, where you play as Ellie, who’s out exploring with her friend Riley. There are added tactical advantages to the gameplay, with less enemies to eradicate and more of a focus on interacting with the environment. Once you find out the reason why Riley brought Ellie there, it’s a very emotionally revealing part of the game, definitely not to be overlooked.

Have you played The Last of Us? If not, are you going to start now? Sound off in the comments below.

TAGGED: Naughty Dog, The Last of Us