ONE NIGHT IN MIAMI Is an Achievement in Splendid Storytelling - Nerdist

ONE NIGHT IN MIAMI Is an Achievement in Splendid Storytelling

One Night In Miami, directed by Regina King and based on a play by Kemp Powers, is exemplary filmmaking and storytelling. Each person—I balk at using “character” as these are real people—is given individual moments to shine and reveal themselves. The acting, style, music, and direction all complement each other. Films like this bring our enjoyment and our self-reflection into hyper sensitivity. Words in the film are not just auditory noise, but visceral reactions that move us to nod and say “mmhmm” in agreement.

One Night in Miami is a fictional account of the night that four amazing Black men—Muhammad Ali (Eli Goree), Malcolm X (Kingsley Ben-Adir), Sam Cooke (Leslie Odom Jr.), and Jim Brown (Aldis Hodge)—spent together after Muhammad Ali’s world-championship win. The initial meeting is, seemingly, to celebrate Muhammad Ali’s victory. Though Malcolm X is hoping to ask a particular favor of Muhammad Ali. However, differing ideas on how to support Black people in a time of the Civil Rights movement and segregation leads to conflict amongst the group. 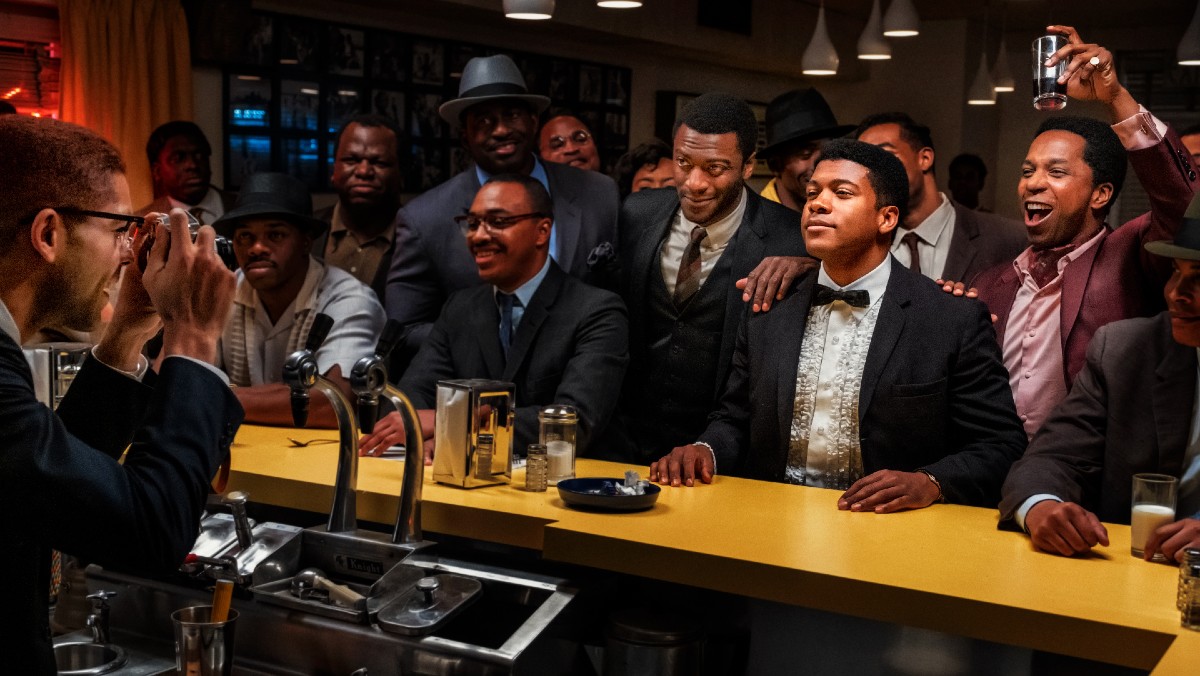 It’s Regina King’s feature-film directorial debut and it is stunning. She does such a great job of conveying emotions, camaraderie, and tension. The use of natural light, rather than the glare of Hollywood, emphasizes its authenticity. This is a conversation, and though we know it is fictional, we can envision them having it amidst the muted yellow glare of an obscure hotel. There’s little doubt Regina King took the best of her experiences in front of the camera to guide this vision.

The acting is riveting, strong, and pained. And each actor portrays that. It demonstrates the way we can be happy and torn, joyous and weary. Because we are always at odds with where we are, what we need to do, and how we get there. The acting is not only composed of dialogue, but mannerisms down to finger snaps and walks. Memorable performances abound. Kingsley Ben-Adir as Malcolm X is magnetic and heartfelt as he talks about giving back to the Black community and not playing up to whiteness. His sermonizing is riveting and captures the powerful way Malcolm X expressed his thoughts. 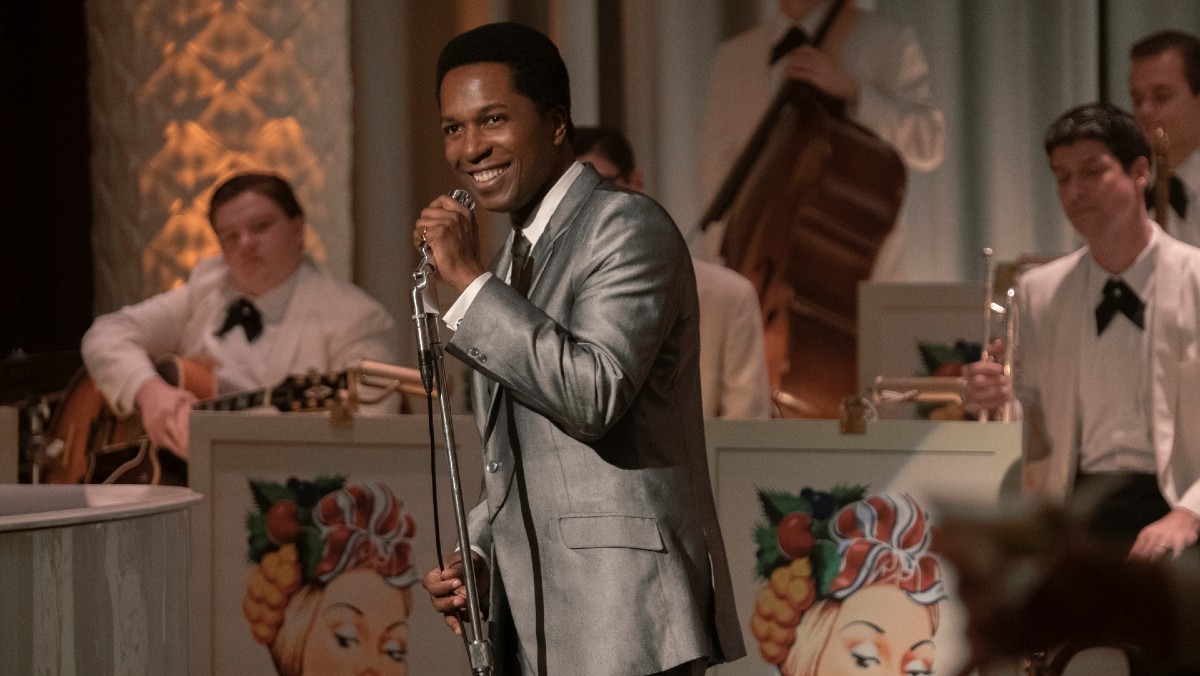 Aldis Hodge as Jim Brown is no less entrancing. His words and behaviors are often far more reserved, but are the epitome of “quiet strength.” This is a person that could easily lay you out, and feels no need for the self-aggrandizing behavior to herald a beatdown. He displays not only physical strength, but mental strength and acuity. Aldis brings Jim to life. Jim’s observations are often spot-on among his three friends. He is no less passionate than the others, but can convey that passion through words and expressions without yelling.

The conversations are ones we still have now. Black celebrities and their obligation, if there is one, to uplift those in their community is a constant debate online. As is the detrimental behavior of the reserved racist who does not mind helping the “good negro” so long as we don’t forget our position in the white supremacist machine and we show the appropriate gratitude on demand. 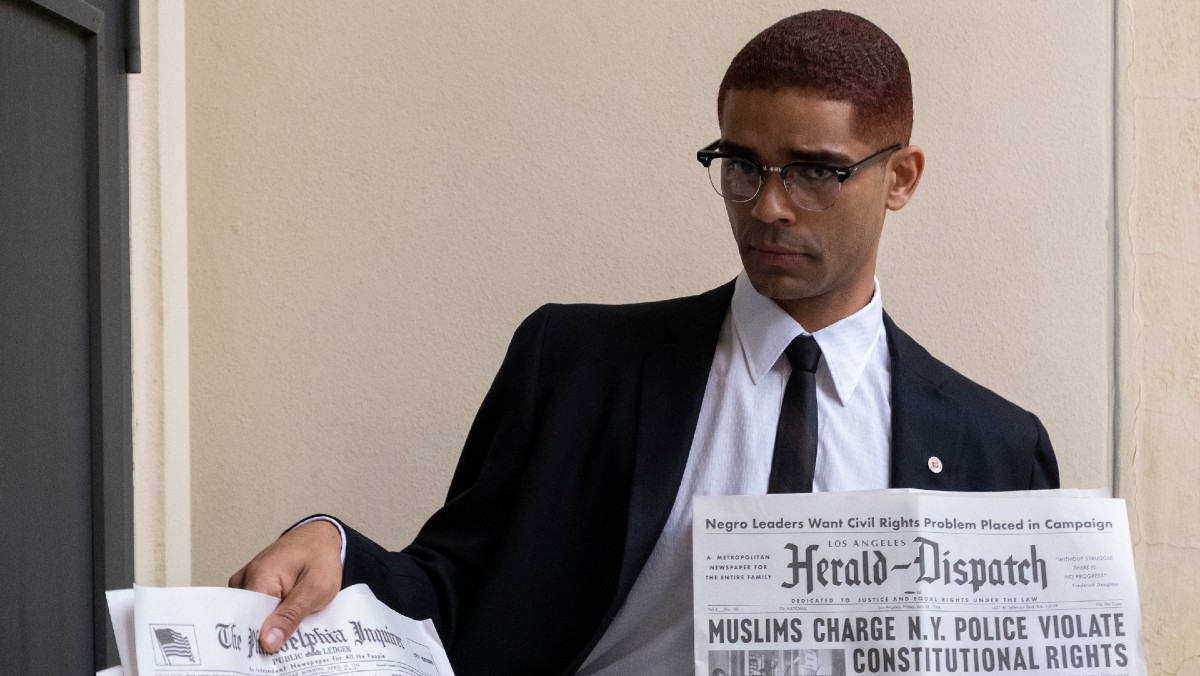 Leslie Odom Jr. as Sam Cooke is a revelation. His style and demeanor is that of a playboy. But his heart nevertheless struggles with the challenges Black people face and his role in it. He is the celebrity singing songs of love. But he faces criticisms that his music that does not speak to his people’s struggles and suffering. He depicts a Black man torn between his understanding of the harm white people cause and the need to be accepted.

Scenes between him and Ben Kingsley-Adair will keep the audience engrossed. We can understand both vying beliefs on how to move forward. And like them, we need to realize there is no one solution that will solve the crisis of white supremacy and racism. But there’s pain and hope. Sam Cooke’s “A Change Is Gonna Come” clearly resonates through this film long before it is sung. 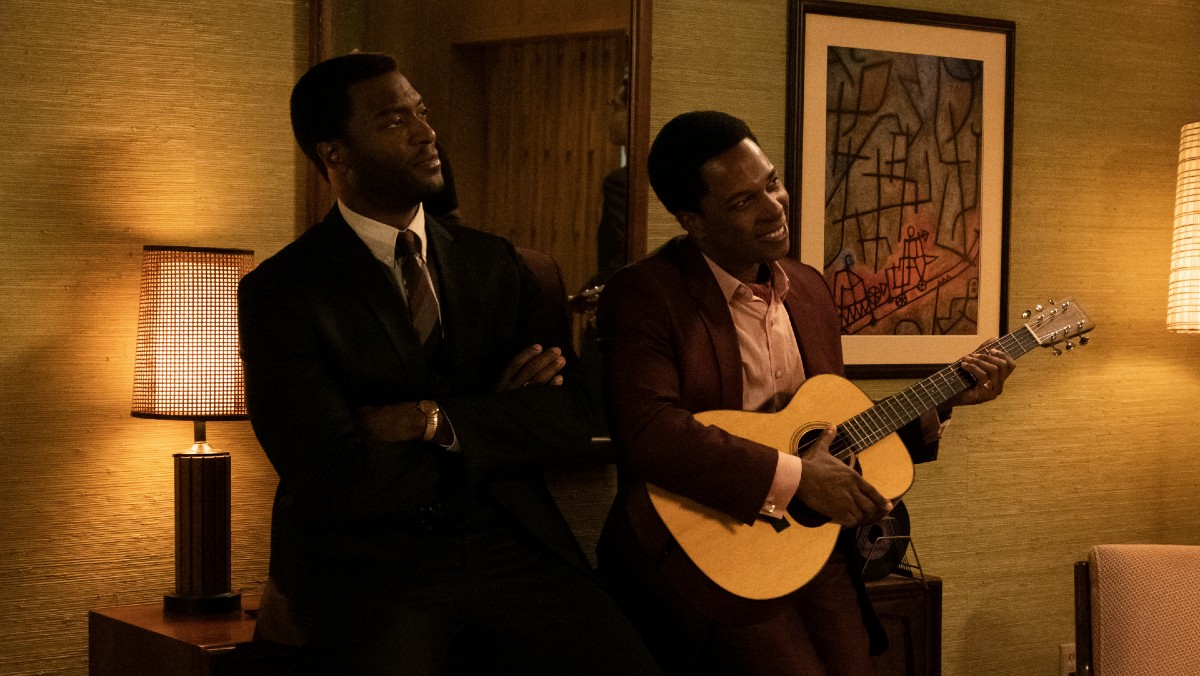 The actors unite and rise greater than the sum of their parts. One Night in Miami feels at home then, now, and tragically will still feel at home in the future. We continue to debate about how to best uplift Black people, and their roles as celebrities. Malcolm X’s challenge to Sam Cooke to use his talent to help the community rather than coast through white circles with love songs is no different from what we shout at celebrities on social media. Nor is Sam’s assertion that the way for Black people to succeed is for them to have financial success unique to that time. And, like back then, you have people who feel it’s not a celebrity’s responsibility to be a force for Black people.

The struggles for us to be recognized as human beings with intrinsic value won’t change in this generation. Not when hate is so powerful that white people would be happy sinking their own ship as long as they know we are in the bowels and the treacherous water will reach us first.

There is so much beauty seeing our people depicted onscreen without the focus being on trauma, but a way through. And the buzz One Night in Miami is deservedly generating shows there has been changes. Is it enough? No. But it’s still a change, and as long as we hold white supremacy’s feet to the fire. And as long as we stand united, we can bring about the changes we want to see.