Aeon’s End is not a game about the end of the world. It’s a game about what happens after; it’s about surviving and fighting back. Humanity huddles in the Gravehold-the only city left that’s safe-while horrible creatures emerge from the Breach to assault it. Only a select few people known as Breach Mages can harness the raw energy of the world and use it to fight back against the darkness. That is Aeon’s End.

The popularity of pure deckbuilding games has waned slightly in the last year or so. It’s now more likely to see the mechanic incorporated into a larger game than it is to see it holding up a game on its own. For those unfamiliar with the term, here’s a quick primer: in a deckbuilding game players all start with similar or identical hands of cards that are very small and very weak. Over the course of the game new more powerful cards are purchased and thrown into the deck’s discard pile. When you’re out of cards to draw, the discard pile-and those new fancy cards-are reshuffled and you begin drawing again.

This is in contrast to a game like Magic: The Gathering or Hearthstone where a deck is built outside of the game and played through over the course of your match. In games like Aeon’s End or Dominion (the granddaddy of the genre), building your deck is the game and there are various systems used to score how well your deck performs and declare victory. 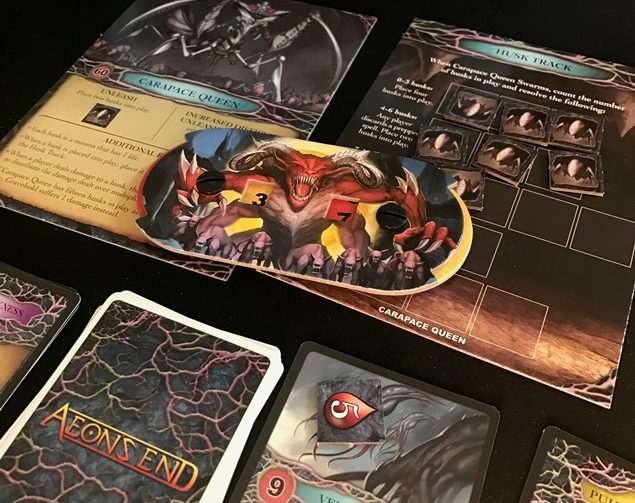 Aeon’s End replaces Dominion’s bland medieval cellars and gardens with scintillating crystals, powerful relics, and spells that bend the very fabric of reality. Victory is not declared against your opponents by counting abstract points, instead, you’re working with your fellow players to destroy hellbeasts like the Rageborne or the Carapace Queen before they kill you and everyone you love. It’s a little more dramatic, and it’s part of why Aeon’s End is my favorite game in the genre. It doesn’t feel like I’m churning through an economy engine, it feels like I’m blasting something called the Prince of Gluttons in his quivering maw with gouts of fire powered by destroying the very cards I so jealously purchased earlier.

Aeon’s End is about drama and excitement. Deckbuilders have a standard structure to them: buy new good stuff, toss the old bad stuff, then power-chain your good stuff out to victory. In this game you’re doing that in the face of unspeakable horrors that are also getting stronger. Each Nemesis has its own unique abilities, features, and cards that are added to the standard Nemesis deck. When the big bad monster gets to act it works its way through tiers of cards that get progressively meaner. There are some generic monsters and actions that you’ll see in every game, and others are Nemesis specific. The Carapace Queen’s little minions fill the board with tiny 1 HP minions that slough off of her like the Cloverfield monster. They’re annoying to kill, easy to ignore, and deadly once you realize the game can end in an instant loss if you let 15 of the ankle biters into the Gravehold.

If that wasn’t enough to get me going, then what really shuffles Aeon’s End to the top of the deck is that, well, you never shuffle. Cards are added to your discard pile in the order you play them. When your deck runs out, rather than shuffle your discard pile, you simply flip it over and begin drawing as normal. This is brilliant for a number of reasons. The first is that it gives you great control over building combos. There’s a resource card that gives you bonus resources if it’s the 2nd copy you play. Instead of hoping they show up together, you can discard them deliberately as a pair and hold any extras back for a future turn. The next time around you’ll get those 2 back together and can exploit their synergy. 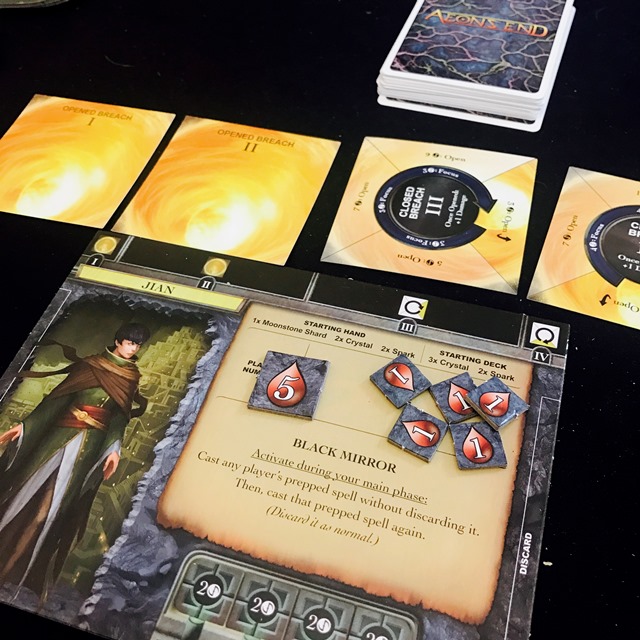 This deck stacking mechanism also gives you great tempo control. I hate playing a deckbuilder and filling my deck with good cards only to see a draw of 5 resource cards or 5 actions and no resources. That never has to happen in Aeon’s End unless you want it to. The spells that you cast have to be loaded like missiles into one of your 4 Breaches at least 1 turn before you cast them. Again, this allows you to control the tempo of your deck. While your spells sit in those breaches, your deck is full of economy. Delaying your spells for a few turns can let you quickly purchase more. You can also delay them to build combos or sync them up with your friend’s abilities. On the other hand, the Crooked Mask might be dumping Corruption Cards in your hand so delaying could cost you your life.

Add to all of that the various mages with unique abilities and starting decks, the admittedly fiddly system for unlocking breaches or charging special powers to ensure you rarely have wasted resources, and upcoming expansions, and you’ve got a game I can’t put down. It scales really well from 1 to 4 players and the art shines sprawled across your table. Aeon’s End is a breath of fresh air into a genre of games I’d begun to ignore.

What’s your favorite deckbuilding game? Do you enjoy cooperative games? Let us know in the comments!