OLYMPIA Takes You On A Cosmic and Emotional Ride - Nerdist

OLYMPIA Takes You On A Cosmic and Emotional Ride

What do you get when you cross the psychedelic ’60s comic vibe of Jack Kirby and Stan Lee with ’80s cinema in the vein of Steven Spielberg and Shane Black? Olympia, a new five-issue miniseries from Image Comics written by Curt Pires with art by Alex Diotto, colors by Dee Cunniffe, and letters by Micah Myers. Olympia is the creative team’s Image Comic debut, an epic adventure full of heart, hope, and intimacy—and Nerdist has an exclusive look at pages from the first issue.

Among it’s cosmic vibes and grand scope, the comic is at its core a love letter to Pires’ late father Tony Pires, whom he co-wrote the story with before Tony passed away from cancer. The real life circumstances lend themselves intimately to the fabric of the story—the main character, a latchey boy named Elon, is a fatherless kid who spends most of his time reading comics. When Olympia, a character from his favorite series, crash lands on Earth, Elon takes up a mission to help the Kirby-esque hero find his way home. As with most stories, however, it’s not quite that easy… because Olympia’s arrival has been followed by a villain hellbent on bringing chaos to Elon’s planet.

“The idea was his. He came up with it when he was in the hospital. I was visiting him, and he pitched me the core concept of a warrior being sent back in time, and being looked after and mentored/mentoring this little kid,” Pires told Nerdist of conceiving the story with his father. “We tweaked it walking laps around the hospital. He’d never sit still. Even in the days before his death, he walked laps around the hospital. He was the toughest person I’ve ever met. Anyways, after he got out of the hospital and was receiving treatment, we’d talk through all the story beats, and I’d go outline and write the scripts, and then show him the issues as they came together. This went on until the very end. He gave me the last scene of the book a couple months before he died.” 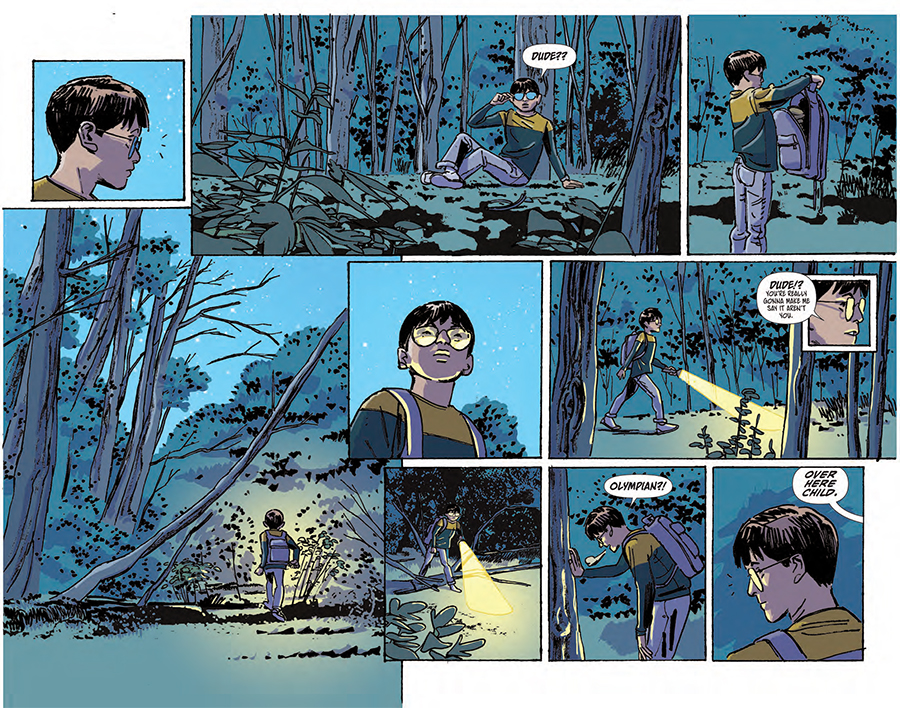 The cosmic aspect of the story, as well as the throwback to a ’60s-inspired aesthetic, was very much an intentional inclusion on the creative team’s part. “I love Kirby comics. I was trying to read as much of his work as I could I think in the year or so before we came up with this,” Pires admitted. “Captain Victory and the Galactic Rangers, Eternals, and his Fourth World stuff was pretty inspirational/influential when it comes to this book. I don’t claim to be an expert or anything, though. I just love the energy and futurism of those books. I wanted to find a way to channel it in a way that felt contemporary. Jack was making comics that felt like they were from the future. I’m trying to do the same. I want the books to still feel cutting edge in 50 years.” Naturally, part of that challenge extended to Diotto’s art as well.

“I tried to differentiate them as much as possible,” Diotto explained of balancing the more “mundane” avenues of the story with its cosmic tilt. “This is more evident between the ‘real’ scenes and the comic book sequences that Elon reads. The latter are heavily influenced by the work of the King Jack Kirby. The Olympian is inspired by the Norse mythology. His armor in the early designs was way more like a tech-suit, but as I worked on the book, the armor became more of a suit, simpler in the design.” 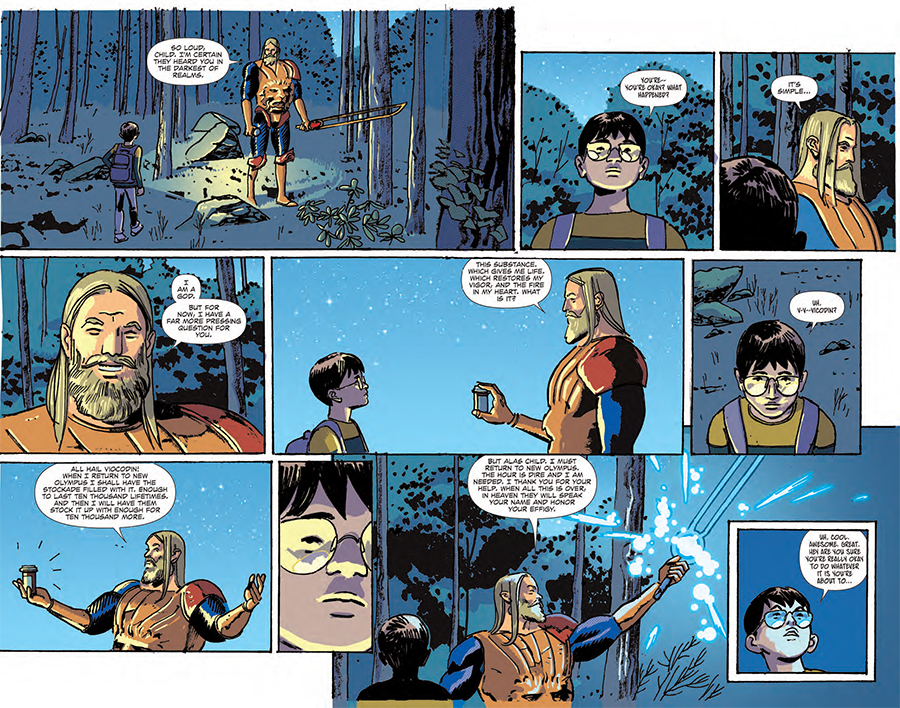 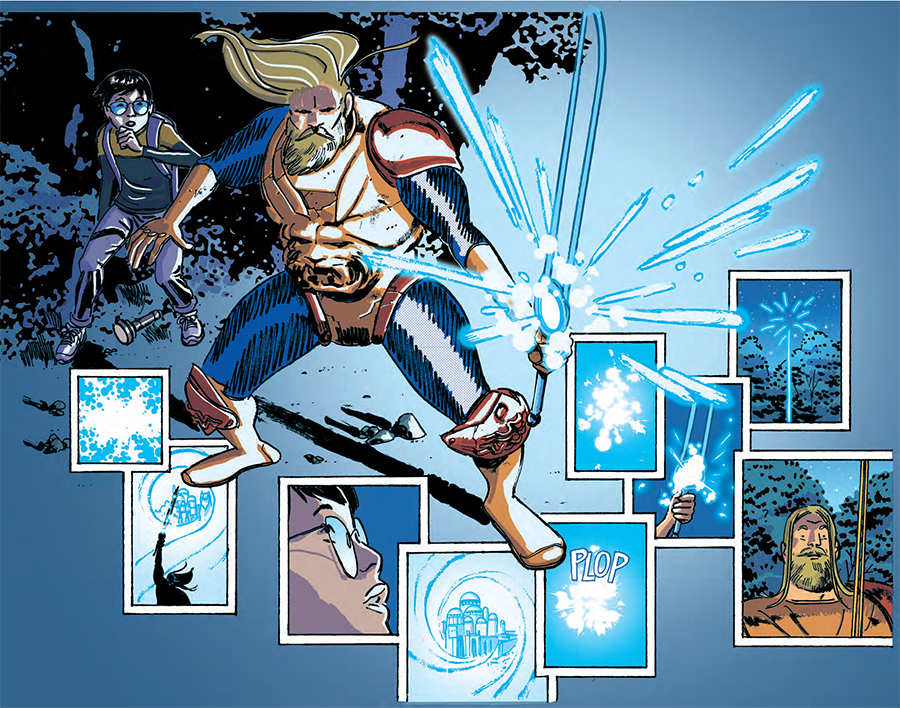 Comedic and emotional, Olympia‘s main message—hope and vulnerability—extends beyond the flashy colors and epic art. “Creating for me has always been the ultimate form of therapy. And it’s given me a place to put these feelings,” said Pires. “But mining them, turning these emotions into a narrative is heavy. It takes a lot out of me. Doing press is hard too—I have had to put myself out there and talk about the hardest and most painful thing that has ever happened to me a lot in the last few months, in promoting this book. But the alternative is cowardice and turning away from giving my father the credit and legacy he deserved, and I’m not about that. I just hope this book can help people— make them feel less alone, and if they’re going through some similar crucible, recognize that there is hope and beauty on the other side of the darkness.” 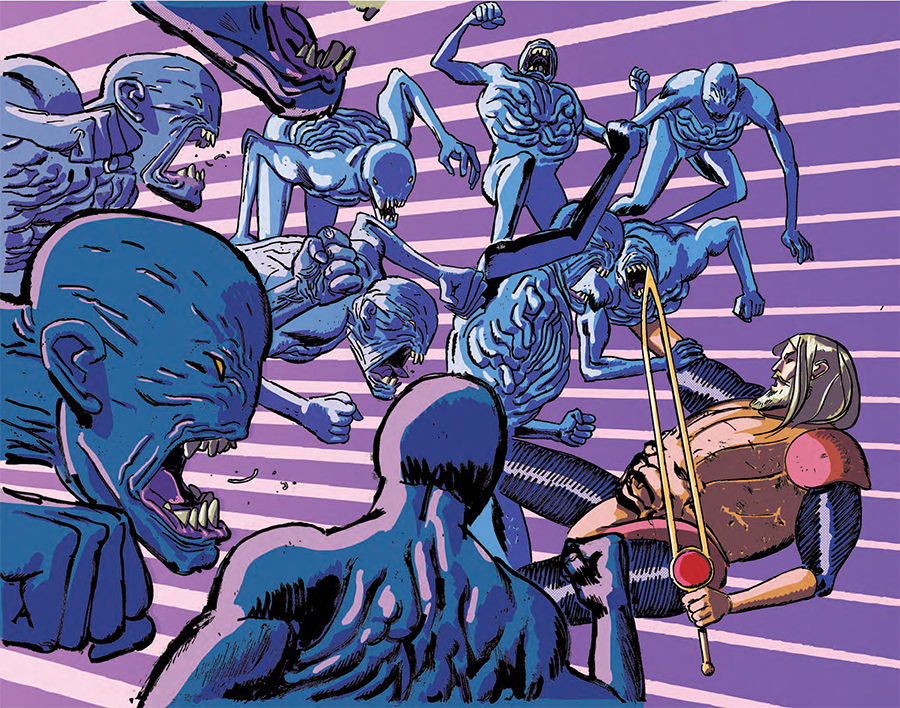