“It’s a gift I have to share with the world!” – Scanlan Shorthalt, “Attack on the Duergar Warcamp”

If you’re going to challenge Scanlan Shorthalt to a “sing off,” you better be ready for his response, as Critical Role fan Chance the Bard (AKA Martin Schopen) recently found out. “Shorthalt, you got spice?” Chance asked, and oh yes, Scanlan has spice.

And if that’s not enough proof that Mr. Shorthalt is a master of his craft, here are just some of the amazing spur-of-the-moment songs by Scanlan that show he’s also the MVP in a different kind of battle: the bloody kind.

In “Strange Bedfellows,” the group encounters Clarota, an aberration that offers Vox Machina an uneasy alliance. As a peace offering and a “symbol of dedication” to the mistrustful mindflayer, Scanlan offers to sing a healing song.

“I’ve not heard a song,” the creature growls after hearing the bard’s quick tune. “I shall call upon you for more in the future.” (It is a pretty good song.)

While it’s not sung in the heat of battle, not only does Scanlan win a little of Clarota’s respect, the groovy ditty is so good that Scanlan can’t resist humming it to himself… and possibly drawing the attention of enemies nearby.

“Shut Up and Shoot that Hole!”

In “Enter Vasselheim,” it’s up to Vex with just one shot to hit a gold-piece-sized hole in the ceiling to stop the mechanisms in the room from crashing down on Vax and the others.

Scanlan sings to inspire her, and the entire group can’t help singing and dancing along. I dare you not to dance along with them.

“Show Me that Grog Blood”

“Against the Tide of Bone” pits Vox Machina against an army of undead on the streets of Whitestone. As the adventurers square off against the towering Zombie Stone Giant, Scanlan takes a moment to sing to Grog to the melody of Taylor Swift’s “Bad Blood.”

As Grog feels the pounding rhythm of inspiration, he yells, “This is my jam!” He sings a reprise a few moments later as he takes a huge, massively damaging swing at the giant’s legs. 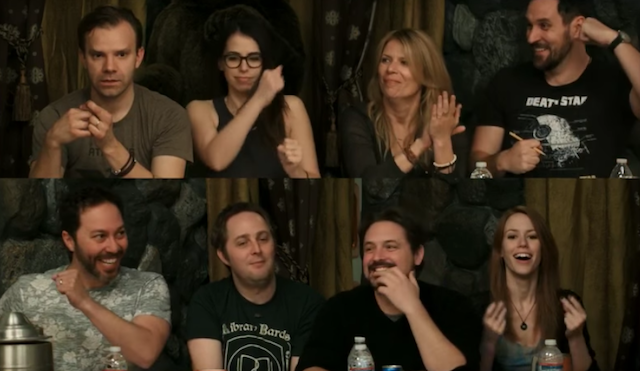 “Hail to the Goliaths!”

There is no better Scanlan serenade than this moment in “Return to Vasselheim.” Reunited with their friends from The Slayer’s Take, Kashaw and Zahra, most of Vox Machina can only stand by as Grog faces the monk Earthbreaker Groon. Groon wants to test Grog’s resolve and allows him the help of just two allies, Vax and Scanlan.

Scanlan takes the chance to inspire Grog with a rousing fight song that has the entire group clapping and cheering. Sam reveals that the melody is actually the fight song of Travis’s most hated football team, and Travis had fallen right into his tuneful trap.

“I Know When That Poop Phone Glows”

This quick ditty from “Into the Frostweald” is an ode to the days of Scanlan’s scrying poo. Sung as an inspiration to Pike in the thick of battle against ice-scaled basilisks, it’s almost romantic. Almost.

Which song of Scanlan’s do you hum to yourself? Share it in the comments!