The original seven A Nightmare on Elm Street films had Freddy Krueger enacting a lot of very creative kills. He turned one poor victim into a puppet, and he turned another into a cockroach and then crushed her in a giant Roach Motel. But maybe his most memorable kill, or at least one of his most disturbing, came in A Nightmare on Elm Street 4: The Dream Master, when he trapped the souls of his victims inside little sausages on a giant pizza, and then ate them one by one.

Well, all of you Elm Streeters out there can own a permanent memento of one of Freddy’s most gruesome kills. Thanks to the folks at Geek Alerts, we’ve learned they are actually producing a replica “soul pizza” from the film. This prop decoration measures about 16-inches and features audio and animated faces. This A Nightmare on Elm Street Animated Soul Pizza comes in a themed take-out box and requires three AA batteries to work, but if you manage to buy this one for yourself, you are guaranteed to have the coolest prop at any Halloween party this year. 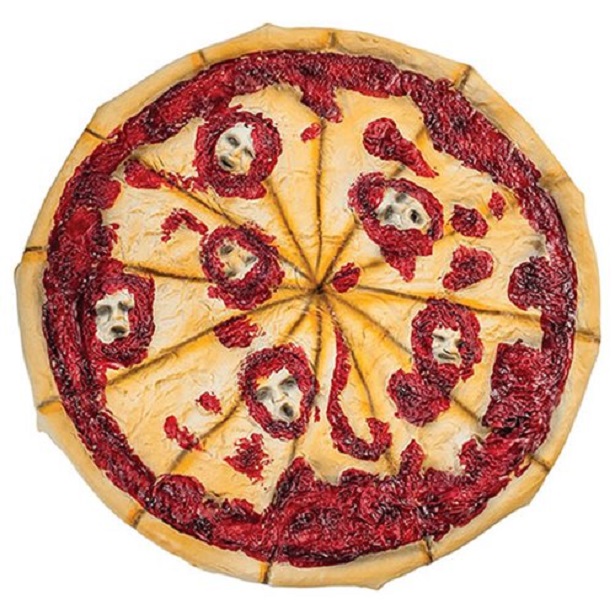 You can pre-order this disturbing snack, which you can see above, for $69.99 over at Entertainment Earth. Hopefully this is the first of many “Freddy Kills” replicas to arrive. After all, what true Freddy fanatic wouldn’t want a television with a replica Robert Englund Freddy head popping out of it like in A Nightmare on Elm Street 3: Dream Warriors? Although how would that work on a flat screen TV? Someone out there figure it out, so we can buy it too.

What do you think of this wonderfully gross prop replica? Let us know below in the comments.

These pizzas won’t freak you out!