A long time ago, Star Wars was nothing more than an idea in George Lucas’ head. More than four decades later, it’s a cultural phenomenon. There were a few steps in-between those two states of existence. It took an insane amount of work just to make the first movie that launched everything. Now, with the franchise about to release its ninth and final film in the Skywalker Family Saga, it’s as much a time to look back as it is ahead. As part of that celebration of the history of the galaxy far, far away, Star Wars has released a video showing how A New Hope‘s Death Star trench run went from storyboards to the big screen. It reveals how a some details we all know so well could have looked very different.

The broad strokes of the Rebel’s great victory and how it was shot are right there in the concept art. The general plan of attack, the tight edits on the fighters’ faces in their cockpits, and the Death Star’s defenses existed in the storyboards. If you focus on just those during the video you get the same feeling of excitement and danger.

Not all of the specifics match up though, and that’s a good thing when it comes to the X-Wing helmets. They are iconic and instantly recognizable, but originally they were far more generic. The Rebel pilots art shows them with their faces covered entirely. They looked more like a a racing or astronaut helmet with an oxygen tube attached. That would have been a huge mistake. We never would have seen Luke’s face during the fight, hiding the range of emotions he experiences during it. Worse, we would never have known what Porkins (RIP) looks like. Plus, they would have been too similar to the ones worn by Darth Vader’s Tie-Fighters, which would have made everything more confusing. 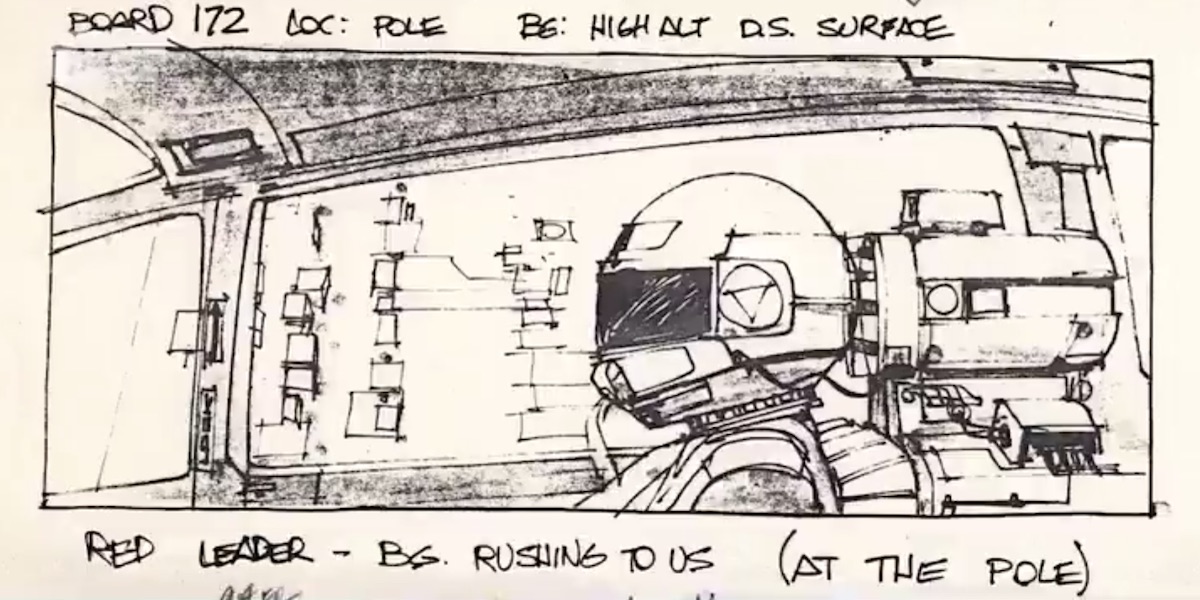 Some of the other changes are less significant, but it’s still fun to see the process the movie went through from concept to reality. The surface guns on the Death Star went from having a round design to a square one. You can also see some of the changes Darth Vader’s mask underwent, though it always had the same general look.

We all know what the end result was though—one of the most triumphant moments in movie history.

When Luke listened to Obi-Wan and used the Force he didn’t just blow up the first Death Star. And he didn’t just give the galaxy far, far away hope. He launched a franchise that has endured for more than forty years. It will endure a lot more.

Forty years from now we will want to see original storyboards from The Rise of Skywalker too. (But hey, Star Wars, maybe don’t make us wait that long.)