Writer Raf Cordero has often talked about his personal journey into Games Workshop’s miniature games, including his love of  Warhammer Underworlds: Shadespire and his journey into  Warhammer 40,000. In this feature, he talks about getting into Warhammer: Age of Sigmar.

It’s been just about a year since I opened the Warhammer 40,000 Dark Imperium starter set and took my first steps into Games Workshop’s world of rich lore and finely detailed plastic. I’ve fought the demons of Tzeentch with a horde of Orks, clashed in tactical battles in the city of Shadespire, and now raised a warband and battled across the Mortal Realms. Age of Sigmar is Games Workshop’s game of epic fantasy battles, and Path to Glory is a special form of campaign play. You’ll begin with a small force and slowly add special abilities or additional units to that force. It’s full of character and story.

Dipping your toes into one of these games can be a little tricky – not to mention expensive – which is why I was excited that the local Warhammer-Naperville decided to celebrate the launch of Second Edition with a Path to Glory campaign. It’s a game mode that’s designed to allow you to start small and grow as you gain experience and familiarity with your army. The fact that you can add benefits to existing units instead of purchasing a new one also means that you can remain competitive without feeling the pressure to build a massive force of plastic. Path to Glory scenarios are specially designed to accommodate smaller warbands and play quicker than a 2,000 point matched play game, which is another benefit to noobies like me. 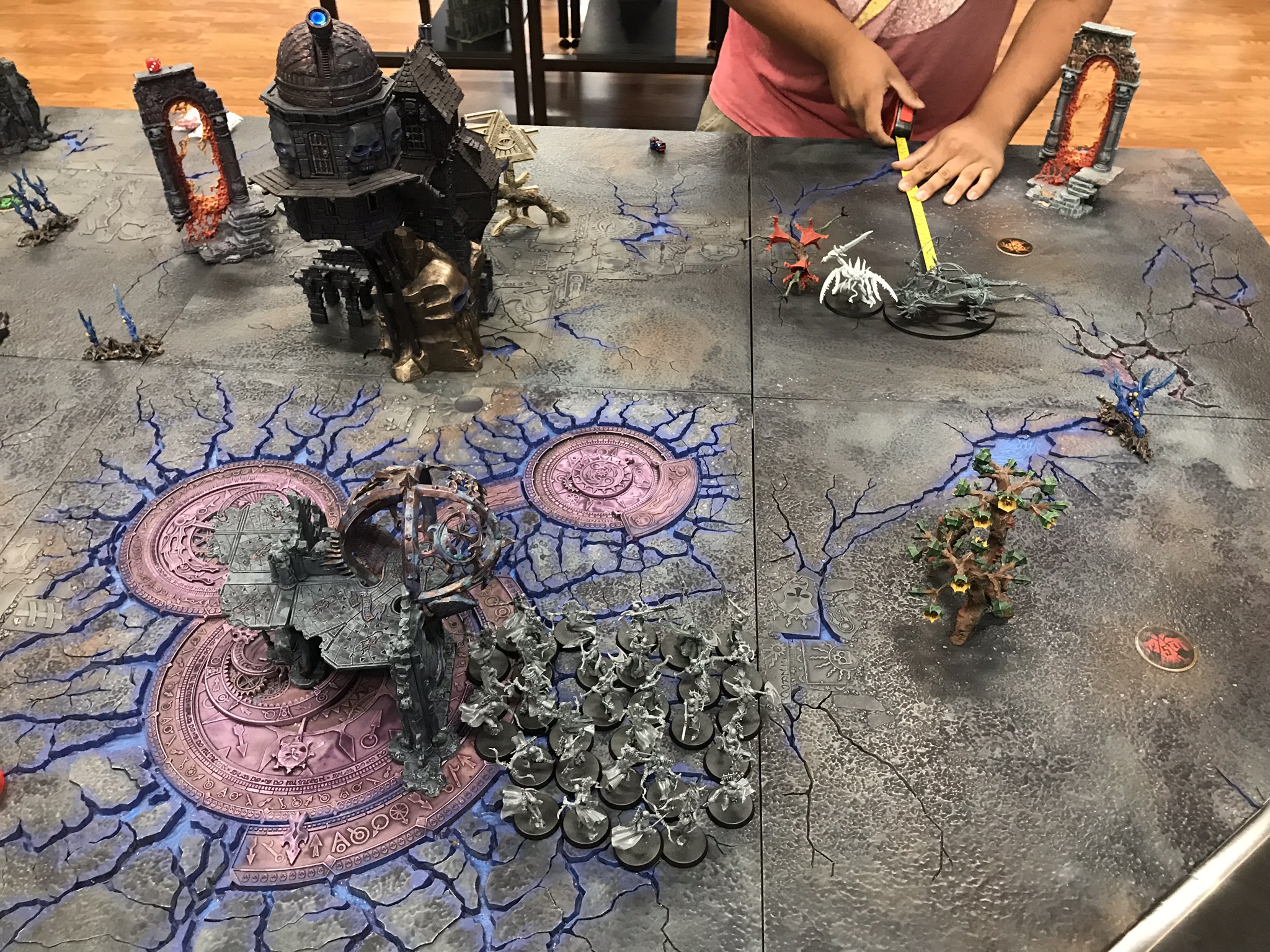 The first step is to build a Warband. One of the reasons the local store owner Larry was celebrating the new edition with Path to Glory was because it’s a great way to play a series of battles using the figures in the  Soul Wars starter box. That’s exactly what one of my opponents, Jeff, was doing. Starter set forces are a great way to get a feel for the flavor of a faction, and playing in an escalating campaign means you can see what you like before expanding. You also don’t need to worry as much about synergies or army construction when you start. The temptation to jump straight into a 2,000 point army is strong – please don’t ask me how I know – but I really enjoyed playing with what I had before growing my force.

If you don’t want to go with a starter set, you’ll still need to choose a faction and build a warband. Each faction has different options, but they all work fairly similar. Shortly before the launch of Age of Sigmar‘s Second Edition, the world was introduced to the Idoneth Deepkin. This faction of elves hides in the depths of the sea, emerging to raid villages and steal souls. Path to Glory encourages you to come up with a backstory for your warband. This is a great way to invest yourself in your force and elevate a game beyond the clattering of dice and movement of miniatures. Ionan, my champion, had been guiding his troops through the Ethersea when they were separated from the larger army. Through the course of the campaign I imagined other lost units rallying to his banner, joining the search for our comrades. 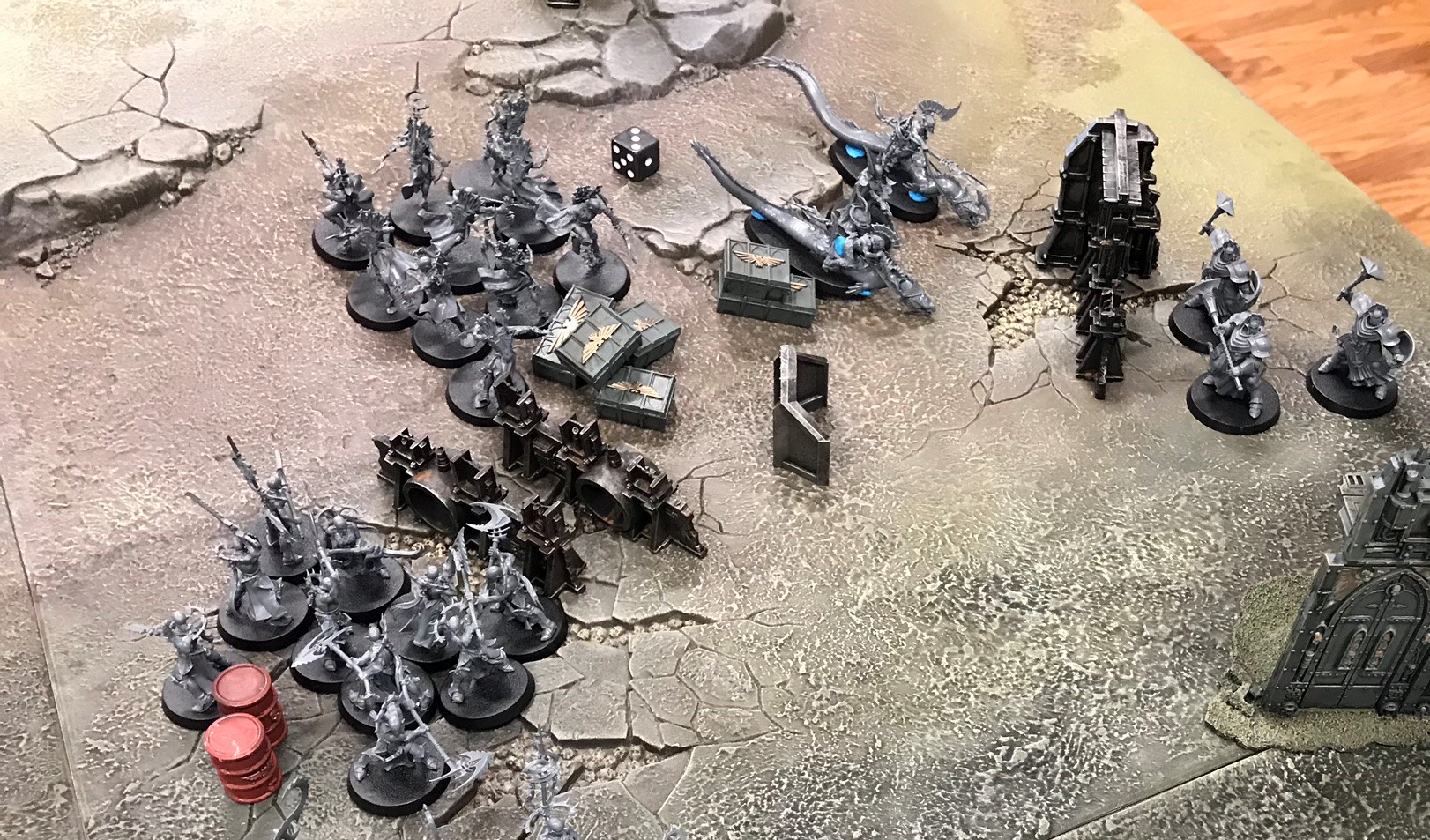 For a new player, this warband construction process couldn’t be more helpful. Unlike the Matched Play modes, you don’t have unlimited freedom in building your force. First you choose (and name!!) a Champion to lead your plucky posse and that champion determines your unit options. I went with an Isharann Soulscryer, figuring that his ability to emerge from the Ethersea mid-round on a flank attack would be useful. Had I chosen a stronger Champion I would have had fewer options, but he gave me 4 Follower options which I used to fill up my squad with a large mass of infantry and archers. My first opponent, Cole, had a leader so powerful he had no additional units! He’s an experienced wargamer, but it struck me that learning to play Age of Sigmar with a single unit is a great way to join the war. 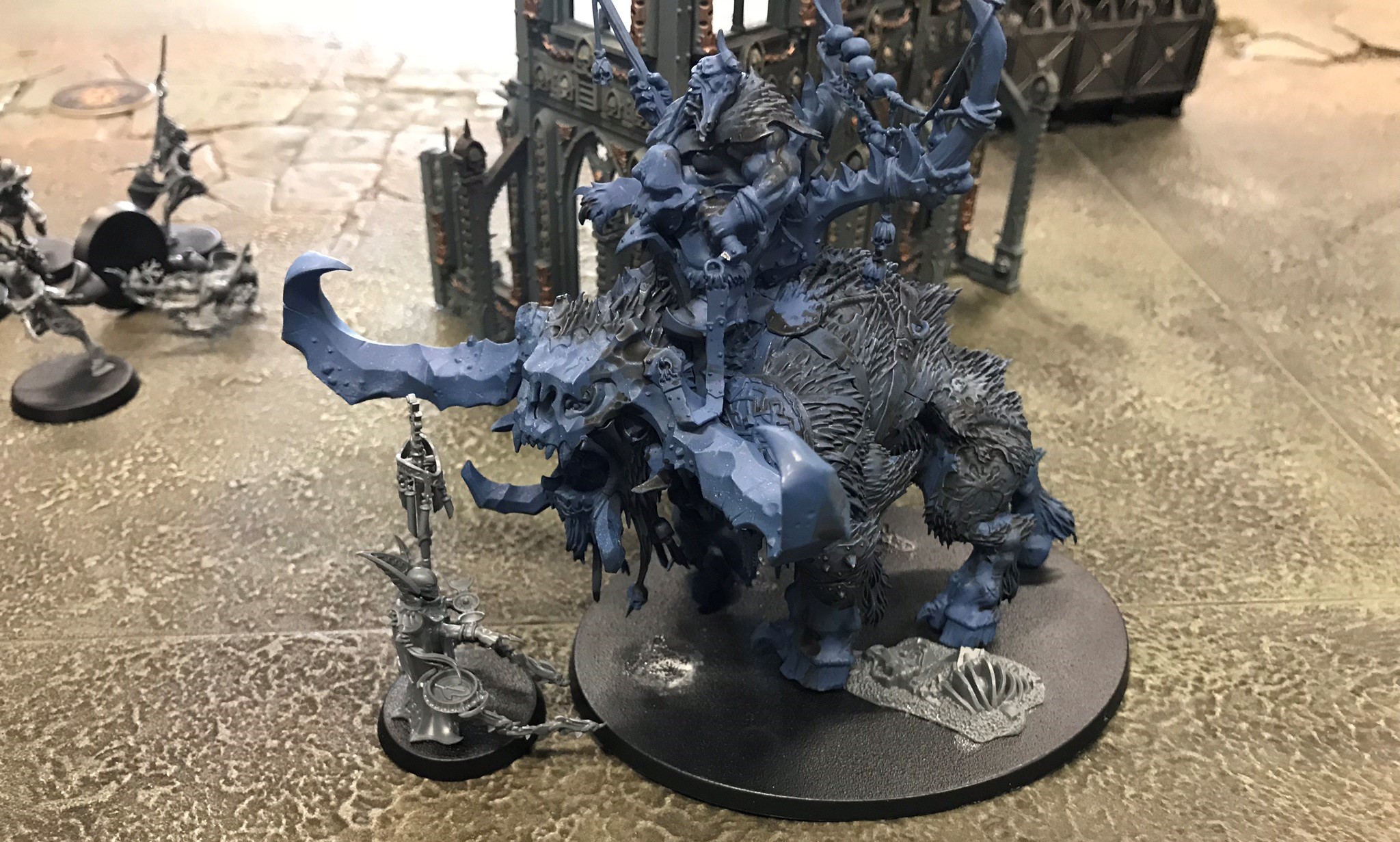 I struggled with how to deploy 32 miniatures, when to bring some units in on a flank attack, and how to move across the board. Cole charged his Stonehorn riding Frostlord straight up the table and did what it does best: smash, smash again, and smash some more just for good measure. The great thing about the way Path to Glory guides you through the warband construction process is that we both had balanced forces. In the end, it came down to his Frostlord, broken and bloody facing down the only remaining unit on my side. I realized in this game that my army was missing a strong, damage dealing unit so I picked up some Morsarr Guard. They’re a unit I had ignored, and likely wouldn’t have picked up had I not started this campaign.

It isn’t just naming your units, or creating a backstory on your own. The games themselves forge a narrative across the table. I tore down my opponent’s monolith as he tried to build it. I held off an opponent’s forces while I sacrificed once of his leaders.  And twice I battled over a quartet of altars, hoping to gain boons from the fickle gods of the Mortal Realms. The Path to Glory book provides a set of scenarios that ensure your games are more than just pushing miniatures together and trying to kill each other. The objective in my game against Cole was to claim 4 altars, but I got distracted by trying to kill his Stonehorn; I should have learned a lesson there – objectives matter – but unfortunately, I did not. 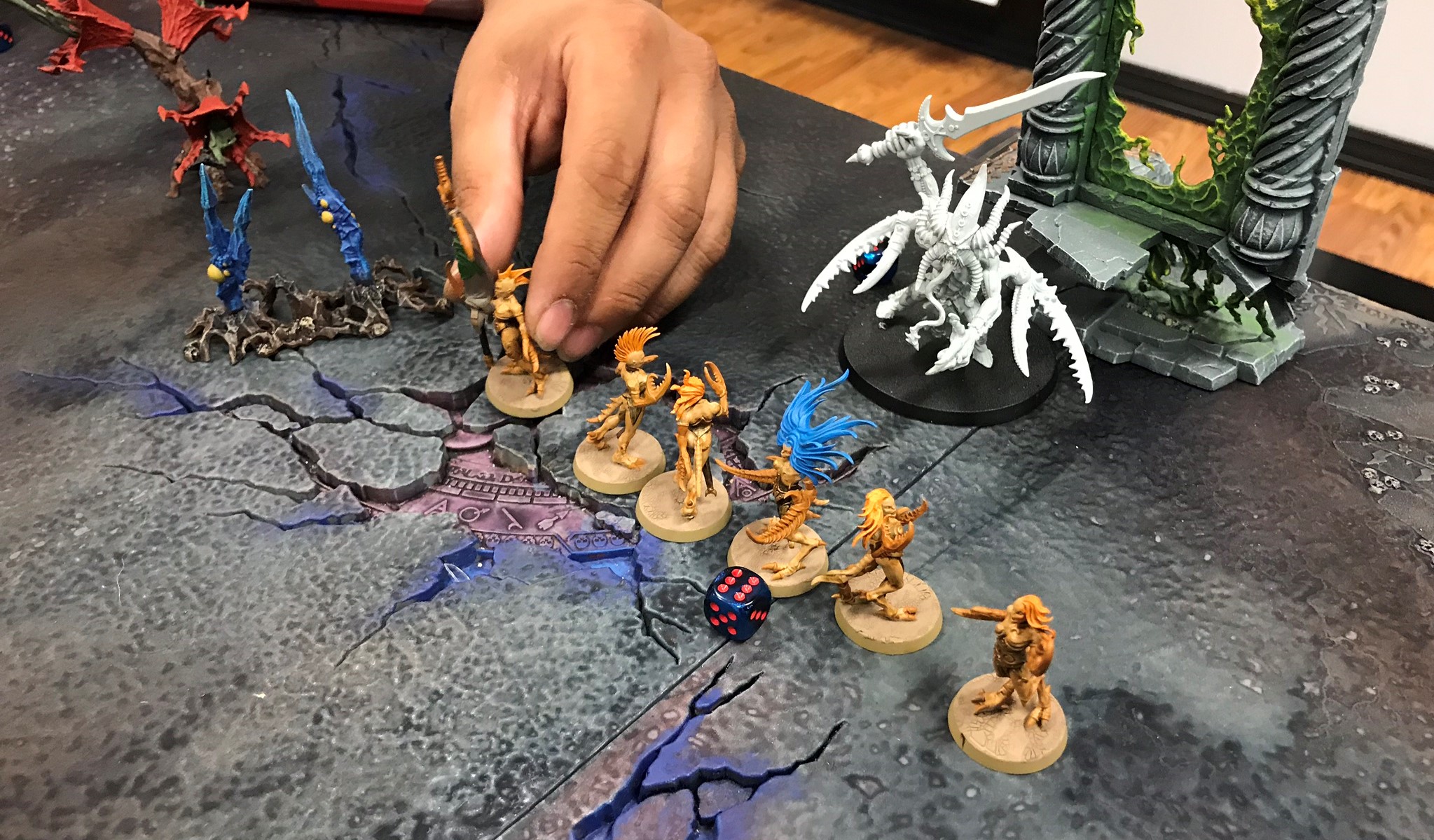 We here at Geek & Sundry love these miniature games for a number of reasons. They tell rich stories on the table and feature high energy games of maneuvering and rolling dice. The hobby aspect is exciting as well.

But more than anything, the community that pops up around these games is welcoming. As a new player to the game, I had a blast playing and appreciate everyone’s patience. The campaign aspect made it easy to learn as I played, and I now have about 1,000 points of Deepkin and am well on my way to full matched play if that’s what I desire. I love that I can take what I learned and grow. Maybe when the next campaign begins I I can flesh out the rest of that army by playing the Deepkin again, only focusing on different units. Or maybe I’ll do what Cole did and start a new army with only a single powerful unit! Path to Glory supports both avenues, and I’m looking forward to my next battles.

What is your favorite Age of Sigmar faction? Tell us in the comments!