New BIG TROUBLE IN LITTLE CHINA Movie Won't Be a Remake, But a Sequel - Nerdist

New BIG TROUBLE IN LITTLE CHINA Movie Won’t Be a Remake, But a Sequel

It seems the rumors of Dwayne Johnson stepping into the shoes of good ol’ Jack Burton may have been a bit premature. The Rock is still set to star in a new Big Trouble in Little China, but it’s not going to be a remake. According to producer Hiram Garcia, it’s a sequel. Collider got the scoop in an interview, in which Garcia stated, “We’re going to continue the universe of Big Trouble in Little China. Everything that happened in the original exists and is standalone and I think there’s only one person that could ever play Jack Burton [Kurt Russell], so Dwayne would never try and play that character.”

This may sound familiar, because The Thing remake didn’t recast Kurt Russell as MacReady either—rather, it showed that a very similar story happened to another group of people before the characters we were familiar with arrived. Comics written in collaboration with John Carpenter have told the further adventures of Jack Burton already: He’s an old man living in Florida in a post-demon apocalypse future. Movies aren’t obliged to accept that as canonical, of course, and Russell has not as yet signed on, though he has wished all involved good luck. 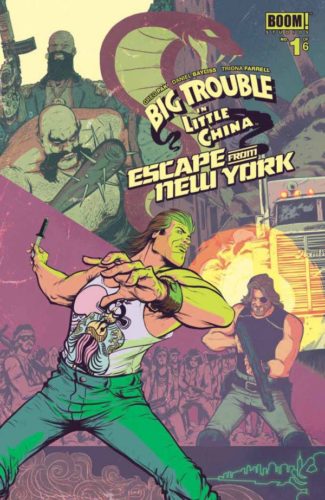 So who could Johnson be? The underlying premise of the original movie was that the traditional all-American hero guy was actually really bad at heroing but got most of the credit, while his so-called sidekick was the one doing all the real work. Dennis Dun could easily return as Wang, saddled with a new lunkhead he has to constantly protect. Jumanji and Central Intelligence proved that Johnson is money playing man-children, after all. And while it’s unlikely Johnson would play Russell’s son, he could be another trucker who inherits the Pork-Chop Express somehow (the Pork-Chop Express has to come back, c’mon).

What would you want to see in an expanded Big Trouble in Little China universe? Tell us in comments below.