Fantasy Flight Game’s Android franchise has proven to be remarkably versatile. This alternately shiny and gritty future offers a number of different gaming experiences; from the murder mystery intrigue of the first game in the series, to the high stakes, high octane living card game action in Netrunner. The game line has inspired stand-alone fiction, as well as an art book dedicated to the not-to-distant future of our planet and beyond. Now, the good folks at FFG bring us a fresh take on the game world with the upcoming release of their newest tabletop experience, New Angeles.

Set in the eponymous megacity of New Angeles, a familiar location to followers of the Android series, players take the role of one of 6 megacorporations that dominate the fictional Solar System of Android. Your goal is simple: build up as much capital and as many resources as you can using whatever means necessary. While on its face, it might sound a tad like cyberpunk Monopoly, it’s refreshingly deeper than that.

Each player is ultimately out for themselves, but they must align and bargain with other players to maximize their earning capabilities. While it’s very much a dog-eat-dog world, each player has a specific Rival they are tasked with beating. As long as the player gains more than their bitter opponent, they come out ahead. There are interesting wrinkles along the way such as civil unrest, organized crime, and the looming threat of The Federal Government sweeping in and shutting big business down for good. You have a limited number of rounds to accomplish your successes, so think on your feet, don’t trust anyone, and grab as much as you can! Even though some may say this echos current socio-political trends a bit too much, it promises to be an entertaining experience to say the least. 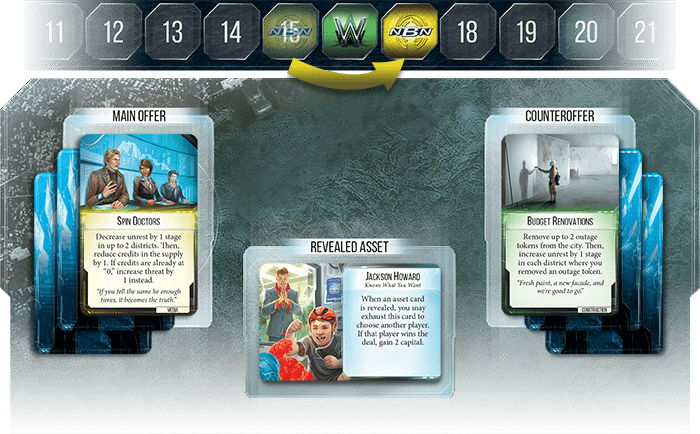 Fantasy Flight’s signature quality is readily apparent in the game’s visual design, miniatures, and packaging (surprising no one). There’s a reason they’ve carved out such a niche in the tabletop market, and with a pricetag of about $60, this is a perfect example of the company’s dedication to keeping gaming affordable and accessible. A worthy entry in the Android series, this high stakes game of corporate intrigue is sure to appeal to fans and newbies alike. The game will arrive on store shelves toward the end of 2016, and we’re very eager to get our hands on it

Think you have what it takes to steer a megacorp to victory? Let us know!

Game of Thrones
Are Westeros Dragons Too Big to Fly? Someone Did the Math
Melissa T. Miller
4 MIN READ