How NEOPETS Spawned a Generation of Coders, Artists, and Writers - Nerdist

How NEOPETS Spawned a Generation of Coders, Artists, and Writers

In Neopia, users could split their time between feeding a new virtual best friend, customizing user home pages, and running illegal pet-trading crime rings. Of course, the main goal of Neopets was to accrue “Neopoints,” the in-game currency meant to be spent on taking care of your Neopet and keeping the economy going by buying food, toys, or something called “the stuff.” Kids could entertain themselves with the many games Neopets offered, as well as keeping up with the loose storyline throughout the years.

But Neopets also encouraged creativity in its audience. Notably in the competitions, like its Beauty Contest, where players could submit their own art of their Neopets. Or The Neopian Times, the in-game newspaper (which never accepted any of my submissions). Neopets was more than just a Pokémon/Tamagotchi-hybrid; it was an interactive digital art space. A realm where future designers, marketers, and engineers could explore and collaborate with HTML, CSS, and writing. What these kids probably didn’t know was how useful these skills would become in the gig economy of the future.

An introduction to coding and design

“I’m a legitimate web designer and coder now, and it’s all thanks to Neopets,” Joey, a freelancer based in the Philippines, told Nerdist about his time on the site. “I liked the idea of a fantasy world you could exist in. But when I was 12 I started realizing you could do other stuff.” This led him to playing around with HTML and CSS. Neopets provided the base for a chapter of creativity and exploration. 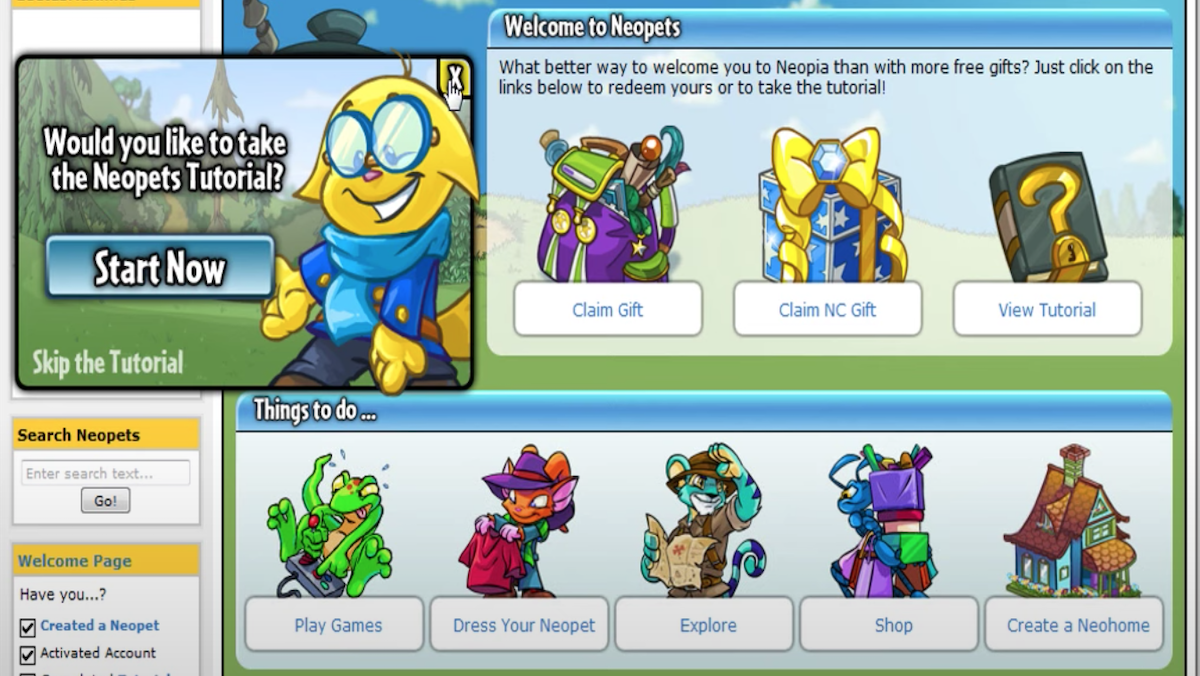 Sites like JellyNeo and SunnyNeo gave kids access to avatars and user layouts to tinker with. SunnyNeo even offered detailed HTML tutorials, so information was easily accessible. Joey’s Pet Page design was inspired by the latest paint job of his Neopet Jub Jub, a furry ball with feet and a face. For those unfamiliar with Neopets, paint brushes were one of the most coveted and expensive items in the game. During my years on Neopets, I’d only acquired one.

Like Joey, Sophia Yeshi, a successful graphic designer, got into Neopets at the age of nine and loved the design aspect. “I got into designing by customizing the user lookups,” Yeshi said. “I remember I had, like, a SpongeBob SquarePants-themed one.” User lookups and Pet Page were the main spaces to tinker with graphic design, but Yeshi spent more time in the guilds, or private clubs. Think of User Lookups and Pet Pages as portfolios of a young designer or coder’s work (in Yeshi’s case, she did link to a portfolio on her User Lookup) while guilds were a collaborative extension of that.

From Neopets to Photoshop, and beyond

Guilds’ focuses ranged from roleplay to media news and events; I recently found a Singaporean guild advertised on the Neoboards (what they call the forums). These guilds inspired Yeshi to download a free 30-day trial of Photoshop. She told Nerdist, “When I discovered Photoshop, it was when I realized I wanted to be a graphic designer.” Around the same time, Yeshi created work for a fashion-themed guild that focused on collages. She asked her mom to buy her a CD-ROM of the software once the trial was over. “I remember asking my mom to go out and buy me Photoshop,” Yeshi recalled with a laugh. “And she came back with a library of, like, 5,000 pieces of clip art. I said, ‘That’s not Photoshop!’” (Back in the early 2000s, Photoshop’s price point was much steeper than the 9.99 a month Adobe offers now.)

Another user, Hannah, a software engineer who has dabbled in coding and graphic design, began to experiment with Neopets as a young artist who was also interested in tech. “My dad and uncle were both artists, and so I wanted to do something that had to do with art,” Hannah said. Together with her dad, she started playing around with HTML, CSS, and drawing. “I wanted to create my own Pet Pages. I did it for a couple years until high school. And I also did Pet Pages for people, and guild layouts.”

What kind of Neopets player are you? 🤔💭 Study this chart to find out, and then tag a friend to see what kind of player they are! https://t.co/JECmOlWp1R pic.twitter.com/67ceU8fO3M

Yeshi and Hannah both offered their services in design to other users—Yeshi through the portfolio she had displayed on her User Lookup, and Hannah on the forums through her signature (or “siggy,” which was exactly like an email signature) that directed people to her page. Both were practicing marketing, a skill that’s crucial for any creative in the gig economy.

Learning to write in the Neopets guilds

But the guilds weren’t just for designers. AMA, a past Neopets writer who now works in marketing, distinctly remembers her time on Neopets as a role-player in the guilds. “I first heard about Neopets through a friend when I was 10 and I asked my parents’ permission to make an email, because back then the internet was still really new,” AMA said. “Eventually I found the Guild Neoboards,” which were the forums where guild owners could advertise to prospective new members. AMA continued, “Guilds were like a club that you were invited to and joined. You could only be in one guild at a time. And there was something called council leaders who would determine the rules and roleplaying themes for the guild.”

Those who role-played as a kid may remember the “standard” roleplaying rules. No “god-moding” or “powerplaying,” which meant taking over another person’s character or deciding their actions. Most guilds required you to be “Lit” (short for, “Literate”) or “Advanced” (code for, “The more purple the prose, the better”). AMA remembers a particular guild that prohibited OCs (original characters) with similar names. This ultimately ended up in a guild riot, as well as accusations of nepotism (not Neopotism) among council members.

Drama aside, roleplaying on the boards and guilds created structure for new writers to follow. “The rules varied but it could say something like how many paragraphs your reply needed to be in order to keep up the literacy of the role-play,” AMA explained. “It taught you how to describe in detail and how to use dialogue and how to pick out the things in a person’s reply that are worth writing about. It helped me become a better writer.” 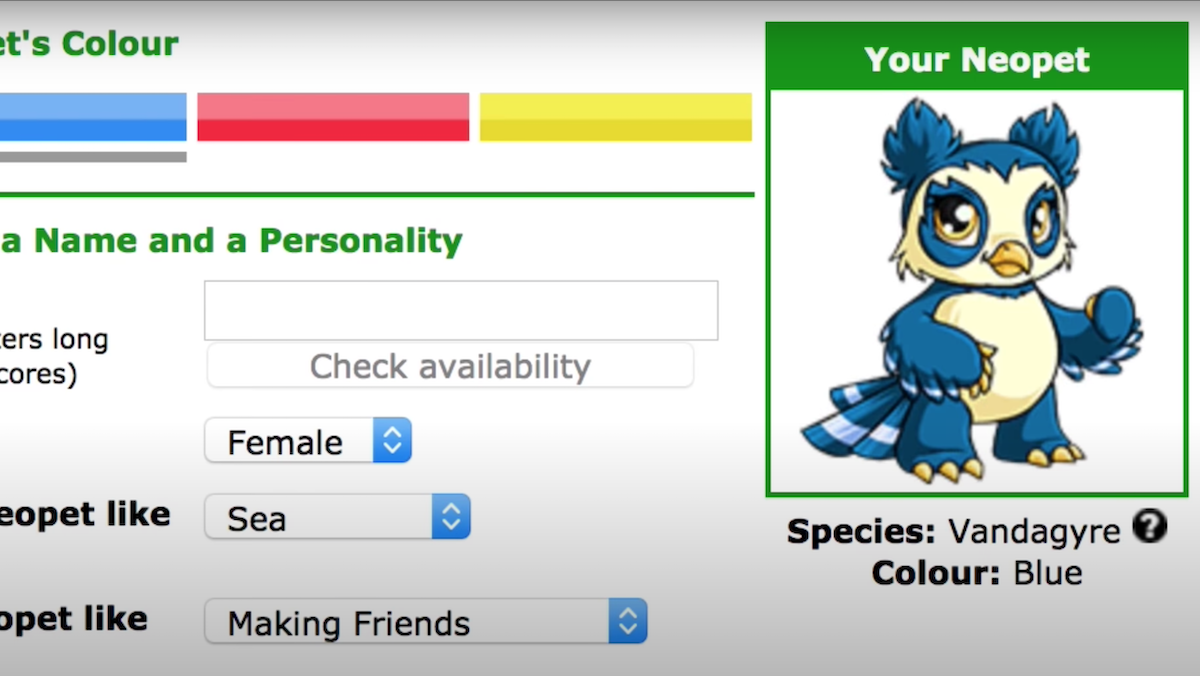 The wild world of the Neoboards

For me as a budding young writer, it was all about the Neoboards. When I looked at the boards recently, things were pretty quiet. (Funnily enough, I found a thread inquiring, “Anyone here from 2006?” which goes to show that the Neopets nostalgia is real.) I remember two distinct types of role-plays: Original and Fandom. Some of the most popular under these banners were, respectively, medieval fantasy and dragon egg hatching, and Marauders-era Harry Potter and Pirates of the Caribbean.

I stuck around the boards for a while, but soon found myself bored with the kid-friendly aspect of it all, and the trend of role-players seeking out “one-on-one” role-plays began. Players took these off the site and onto email, AIM, or MSN messenger so they could drop as many F-bombs as desired without fear of the Big Brother-esque Neopets Team catching them. The site prohibited sharing personal contact information. So, RPers tried to find clever workarounds. Sadly, TNT (slang for The Neopets Team) was always smarter. The team would usually shut down a board after 10 minutes. After repeated offenses, you got a warning. Or worse: they froze your account. Mine was frozen dozens of times. It was a thrill.

But despite the strict rules of it all, roleplaying on the boards developed my writing the same way the guilds shaped AMA’s. Learning to string a sentence together good enough for “advanced” RPs, and working within guidelines set to enhance the quality of the overall role play only helped my writing become stronger.

Eventually, most people left Neopets for newer, cooler sites, or took their skills into real-world application. AMA shifted to a Tumblr Blog; Yeshi signed up for graphic design courses at her school; Joey went into freelancing. “I mentioned the site during a job interview once [when asked,] ‘How did you get into designing,’” Joey said. “And the interviewer freaked, talked about how it was their entire childhood. That was fun.”

I shifted my writing to Fanfiction.net, where I stayed for many, many years, and eventually started freelancing. (Guess The Neopian Times regrets never accepting my submissions now, don’t they?) For now, Neopets is a great source of relics from design’s past, and TNT is hard at work switching over to Flash before 2020 comes to an end. Check out the guilds if you want to be reminded of the early 2000s blinged-out aesthetic, and see what active young designers are doing today.

Multiculturalism Is the Heart of the ZELDA Franchise