It’s time for the general public to name an explorative vessel once again! This time, instead of a BoatyMcBoatface traversing the seas, we’re being called upon to help select a moniker for NASA’s next Martian rover, which will launch from Earth this year. And while there are only nine options for the rover’s name to choose from, it’s hard to complain ’cause they were all submitted by grade school kids.

We’re down to the top nine finalists! Help us name the #Mars2020 rover by telling us your favorite. Cast your vote soon—the public poll closes on Jan. 26: https://t.co/RlWIK1UN3N pic.twitter.com/GxFaId03Vd

The competition to name NASA’s newest Martian rover began in August of last year, when children K-12 in the U.S. were given the chance to submit their suggestions for the rover’s name, as well as a short essay describing why their name is appropriate. After sifting through the 28,000 names that were submitted, NASA winnowed down the selection to the nine listed here:

Obviously there’s nothing playful on the list, which is fair considering the $2.1 billion price tag for the mission—there’s nothing inherently wrong with something expensive having a goofy name, but NASA admins would probably have trouble justifying it. Plus, history would likely frown upon hearing that MartyMcMartianBot discovered the first-ever signs of life on another planet. (Although we most certainly would not.) 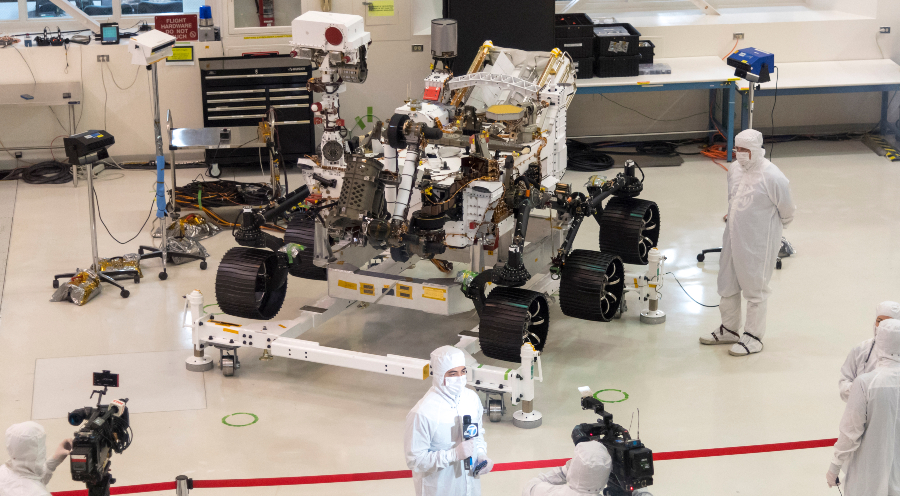 The Mars 2020 rover on display at the Jet Propulsion Laboratory in Pasadena, CA. JPL

For those unfamiliar with NASA’s next Martian rover, it’s the rolling robot that at the core of the space agency’s Mars 2020 mission. According to Ken Farley, a Mars 2020 Project Scientist, the mission has two overarching objectives: “to specifically seek the signs of life, and… sample materials and prepare a cache that could be returned to Earth by a future mission.” The Mars 2020 rover will be looking for signs of current life, as well as ancient, extinct life–potential discoveries that could profoundly shift humanity’s view of its place in the universe.

Those planning on voting may want to keep these core mission objectives in mind when considering what name would work best for the rover, although frankly, it seems like they’re all broad enough to work. NASA also notes that the polling will only be “a consideration,” so whichever name earns the most votes might not even necessarily be chosen. Incidentally, be careful about which name you vote for, because it seems like there’s no way to change one’s vote after it’s been recorded.

What do you think about the public voting on the name for the next Martian rover? And are you happy that NASA made the contest exclusive to K-12 students, or do you wish the agency permitted people from the general population to submit their own ideas as well? Let us know your thoughts in the comments!