We See a Board Game in Your Future: a Sneak Peek at Mysterium - Nerdist

We See a Board Game in Your Future: a Sneak Peek at Mysterium

Mysterium is a cooperative murder mystery game for 2-7 players from Libellud, the makers of Dixit. While it won’t be available until October 1st, you can get a sneak peak of the game right here.

For most people, Mysterium Manor is just another haunted estate that only disbelievers and thrill seekers dare enter. But you are not most people. You know that in reality a haunt is the vain attempt of a spirit to convince the living of the unjust deeds that keep their lost soul in perpetual turmoil. It is for this reason that you have gathered your colleagues, a variety of psychics from around the world, to perform a séance this Halloween and unlock the true reason behind the haunts of Mysterium Manor, so that its ghostly inhabitant may finally lie at rest. 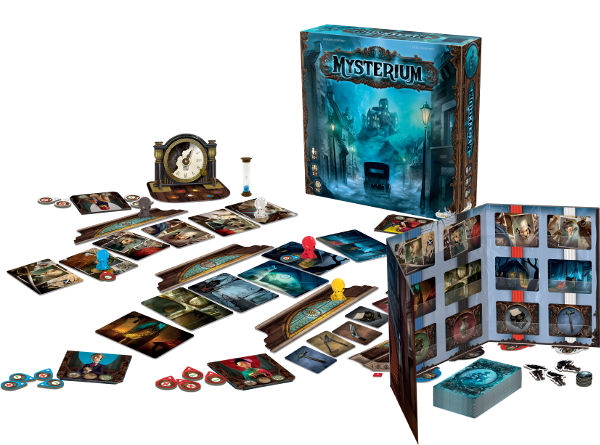 Not Your Typical Whodunnit

This is not your typical whodunnit murder mystery! Instead of trying to determine which player committed a crime, all but one player take on the roles of powerful psychics and the remaining player acts as the ghost of the victim.

If all of the psychic players guess the correct cards by the seventh game round, the ghost will reveal the final vision to the psychics in an attempt to determine the real circumstances behind the ghost’s untimely demise. If the players run out of time or are unable to correctly interpret the visions before the final hour, the ghost will be trapped in limbo for another year. 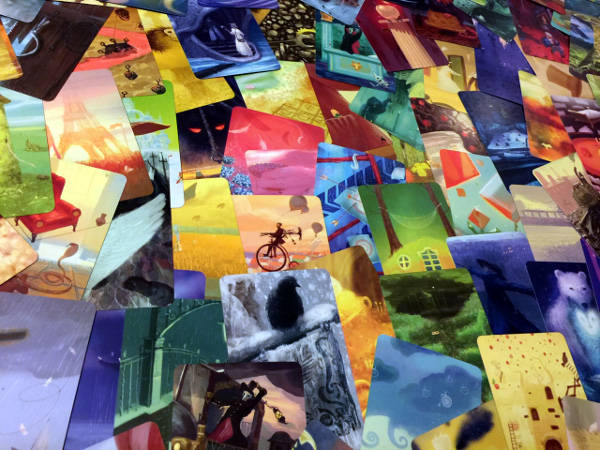 The first time I played as the ghost, all I wanted to do was admire the artwork on the vision cards. Actually, I still find myself trying to find ways to use cards as visions just so the psychics can see the gorgeously surreal artwork. The cards are very reminiscent of the artwork in Dixit, so if you’re a fan of Dixit, you’ll understand my dilemma.

The other game components are stellar as well. The hour counter is an upright clock constructed of high-quality cardboard cutouts with a working dial, the ghost’s privacy screen has precision cut sleeves in it, and the publisher sure didn’t skimp when printing cards. There is also a copy of every psychic card included so that the ghost does not need to mess with names, numbers, pens, or paper.

The best part about Mysterium, though, is interpreting the vision cards. As the core mechanism of the game, it’s something that both the ghost and the psychics must do successfully to win.

As the ghost, it can be challenging to find similarities between the vision cards and crime scene cards. My advice: don’t lament over a seeming lack of similarities. The moment the psychics flip the cards over, they will immediately see several similarities that you hadn’t even considered. You will sit in lonesome agony as the psychics undoubtedly misinterpret your visions. I like to think that the game designers want you to feel some ghostly torment as you are playing.

Of course, the psychics interpret the vision cards too. Only, when they do it, they can openly talk about their visions with other players. The psychics must also vote on each others’ interpretations in order to boost their own clairvoyance and have a stronger chance of winning the game. Some of the votes must rely on your colleagues being wrong in their interpretations as well, which encourages a small amount of distrust in the game. 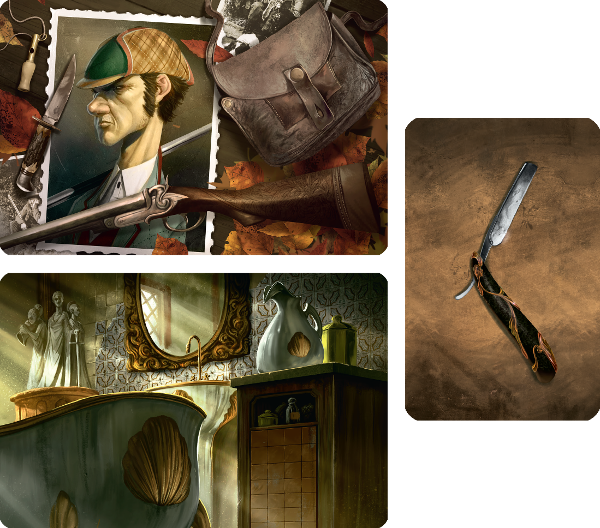 Playing Mysterium is an experience in and of itself. There is bound to be a conversation after each game to discuss how the ghost interpreted vision cards differently from the psychics. And even if you lose, you lose as a team and there is a feeling of camaraderie that leaves everyone with a smile.

If you want to enhance your experience with Mysterium, the rules offer some fun ways to do so, but I’ve added a couple of ideas of my own that can shake things up even more:

If you’re interested in picking up a copy of Mysterium, look for it on the shelves on October 1, 2015.