With news that actor Jake Gyllenhaal is probably joining the latest Spider-Man sequel as the classic Spidey villain Mysterio, casual fans might be wondering who the heck Mysterio is. Well, the answer to that is a bit complicated. In the pages of Marvel Comics, there have been several characters who have assumed the name and fish bowl helmet and bedeviled Spidey over the years. Although they have all worn the same costume, and employed the same smoke and mirrors style tricks to defeat Spider-Man, there were three distinct men behind the mask. 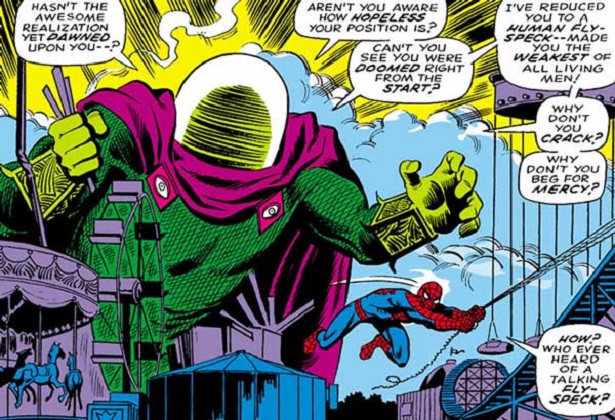 The original, and probably most well known Mysterio, was special effects genius and stuntman Quentin Beck. Created early in the history of Spider-Man by Stan Lee and Steve Ditko, this version of Mysterio first appears in The Amazing Spider-Man #13, in June 1964. Beck wanted to become a leading actor and movie star, and saw his work behind the scenes in Hollywood as a dead end gig. Disillusioned with the Hollywood studios, he becomes a super-villain, using his deep knowledge of special effects trickery to become a formidable criminal. Nevertheless, a high school age Spider-Man arrests him, ruining any chances he had of a future career in the movies. This leads to a lifelong vendetta against the wall crawler.

Over the past fifty years of comics, Beck has gone toe-to-toe with Spider-Man dozens of times, using various tricks and special effects as smoke screens for his crimes. Beck is also well versed in hypnotism, is an accomplished magician, and knows about robotics. He’s also become an enemy of Spidey ally (and fellow New York hero) Daredevil. It was during a conflict with Daredevil that Beck seemingly commits suicide by shooting himself in the head. He has since returned, although there are alternate explanations for this resurrection. In some instances it says he faked his death, while others say he did indeed die and go to Hell, only to be returned to Earth to enact some sort of “cosmic balance.” (I choose to go with option #1 here.) In any event, Quentin Beck is seen as “Mysterio Prime” by most fans, and will probably be who Jake Gyllenhaal plays. The second Mysterio to appear in the pages of Marvel Comics was Daniel Berkhart, who first appeared in Amazing Spider-Man #141 in 1975. After Beck appears to die in prison during an escape attempt (he got better), the Daily Bugle’s publisher J. Jonah Jameson, famously Spidey’s biggest hater, hires Berkhart, a stuntman who had previously worked in Hollywood with Beck, to torment Peter Parker by pretending to be Mysterio’s ghost. After Spidey beats him and discovers his real identity, Berkhart explains that Beck had given some of his equipment to him after he faked his death. Berkhart appears again as Mysterio during the different times in Spider-Man’s career that Beck either was truly dead or faked his death. It’s possible Gyllenhaal appears as Berkhart, but I wouldn’t count on the producers to skip over the original Mysterio. The third Mysterio is Francis Klum, who was created by Kevin Smith for the mini-series Spider-Man/Black Cat: The Evil that Men Do, back in 2002. Klum was a mutant with powers of teleportation similar to famous X-Men member Nightcrawler. Klum had a very tragic and dark past, as he was sexually abused by his older brother Garrison, and then forced to use his powers to assist Garrison’s illegal activity as a heroin dealer. When Garrison dosed Peter Parker’s ally the Black Cat with heroin and attempted to rape her, Mysterio #3  decided to finally put a permanent end to his brother’s evil ways, and actually teleported within him and blowing up Garrison’s body. Every single aspect of Francis Klum’s time as Mysterio is WAY too dark and gross to be part of anything in a PG-13 Disney film, so we can maybe forget this version of Mysterio from ever popping up in a movie, except maybe in name only.

So there you have it folks — the weird and complicated history of one of Spidey’s trippiest and most out-there villains. Are you guys excited to see old fishbowl head come to life on the big screen? Be sure to let us know down below in the comments.

More From The MCU