The end of the world doesn’t mean the end to stories. Post-apocalyptic games are going through a renaissance right now. Fans are still playing Fallout 4 even as new dark visions of the future like Horizon: Zero Dawn rack up critical acclaim. RPGs from the sleek, brutal second edition of Apocalypse World to the billion years in the future science fantasy of Numenera reflect these tastes on the tabletop. The hit post-apocalyptic RPG Mutant: Year Zero comes out of Swedish game company Free League Publishing, who are also putting the finishing touches from their wildly successful Tales From The Loop RPG Kickstarted last year. Their follow-up is an expansion to the Mutant: Year Zero setting called Mutant: Mechatron that not just expands their setting to include robots, but can also be run as a stand alone game.

The Mutant: Year Zero setting is a reimagining of the Mutant RPG series by Target Games developed in the 80s. (Fun fact: This setting was originally the basis of the Mutant Chronicles.)  Dice rolls are resolved with a pool of d6 that combine attribute plus skill plus gear bonuses to roll sixes on the dice. Each type of die is a different color because ones rolled on gear dice can mean the gear breaks. Ones on other dice generate mutant points that can be used on mutant powers but also cause damage to characters. This basic system is in place for Mechatron, though cool mutant powers look to be exchanged with cool robot powers. 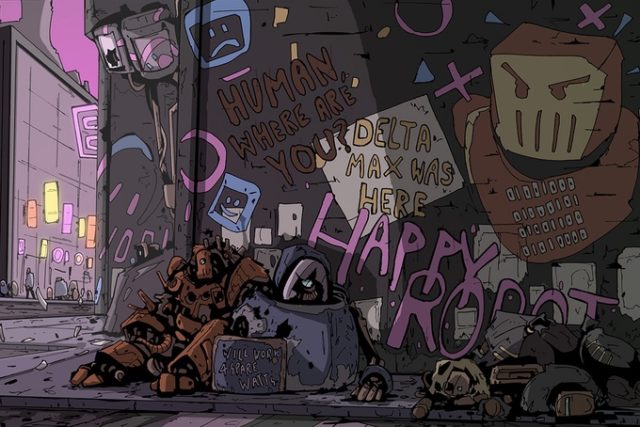 The original game focuses on using a simple system to tell a simple story: the players exploring the area surrounding their Ark in the hopes of finding the materials they need to save it. The location of the Ark and the people inside are created by the players (or the default ones can be used) and cause drama when the players come back home thanks to the different factions trying to develop the Ark in their own way. Mechatron has a similar structure in place with the robot hive and exploratory gameplay, but the authors will layer in elements of great robot fiction like I, Robot, Blade Runner, and Westworld. Not only will characters explore the world, they will also explore themselves to discover what it means to be sentient.

The setting may have started with mutants, but Free League is taking a White Wolf style approach in developing the wasteland. In addition to mutants and robots, there are two other games that fill out the setting. Mutant: Genlab Alpha adds uplifted animals into the mix fighting against cruel automaton overlords. The fourth expansion featuring humans, Mutant: Elysium, is slated to be translated in English sometime later this year or early 2018, but gamers fluent in Swedish can check out that game right now on Kickstarter right now.

The Kickstarter offers digital levels as well as a level that nets a physical copy of the book and all unlocked PDF expansions such as extra adventures and settings. Accessories are also available, like specialized dice to use and cards that replace the adventure and power generation charts in the book. Gamers looking to go all in can also get a limited edition book that will only be available for those high-level backers. the Kickstarter ends on March 23rd, so check it out before it disappears…like tears in rain.

What is your favorite robot protagonist? Tell us in comments.