Some Modern Humans Derive from a "Ghost Lineage" - Nerdist

Some Modern Humans Derive from a “Ghost Lineage”

As we learn more and more about the history of human evolution, the more we find that Homo sapiens had no qualms about getting down with other members of the Homo genus. There’s already ample evidence showing that H. sapiens interbred with Neanderthals and Denisovans, and now, we can add to the list of possible interspecies genetic partners a new branch of humans who currently have the status of “ghost lineage.”

The findings, which come via Discover, were recently published in the journal Science Advances by two researchers from UCLA, Arun Durvasula and Sriram Sankararaman. Durvasula, a PhD student in the Department of Human Genetics, and Sankararaman, an Assistant Professor of Computer Science, found the evidence of H. sapiens co-mingling with the ghost lineage as they explored how archaic branches of humans contributed to the the genetic variation of present-day Africans.

Because Durvasula and Sankararaman found a ghost lineage—that is, “a hypothesized ancestor in a species lineage that has left no fossil evidence yet can be inferred to exist because of gaps in the fossil record or genomic evidence”—they, of course, had no access to fossils. This means that they didn’t have access to any DNA information that may have been present in the fossils either—recall that it’s possible for scientists to reconstruct genomes from fossils that are hundreds of thousands of years old.

Instead, the pair of researchers compared the genomes of living humans, Neanderthals, and Denisovans—a species or subspecies of H. sapiens that ranged across Asia during the Lower and Middle Paleolithic—and looked for the alterations in genes that arose in each branch of humans as they split off from one and other. Most of what Durvasula and Sankararaman found was expected, but when it came to several populations in West Africa, they noticed genetic variations that didn’t line up with those that had already been associated with H. sapiens, Neanderthals, or Denisovans. 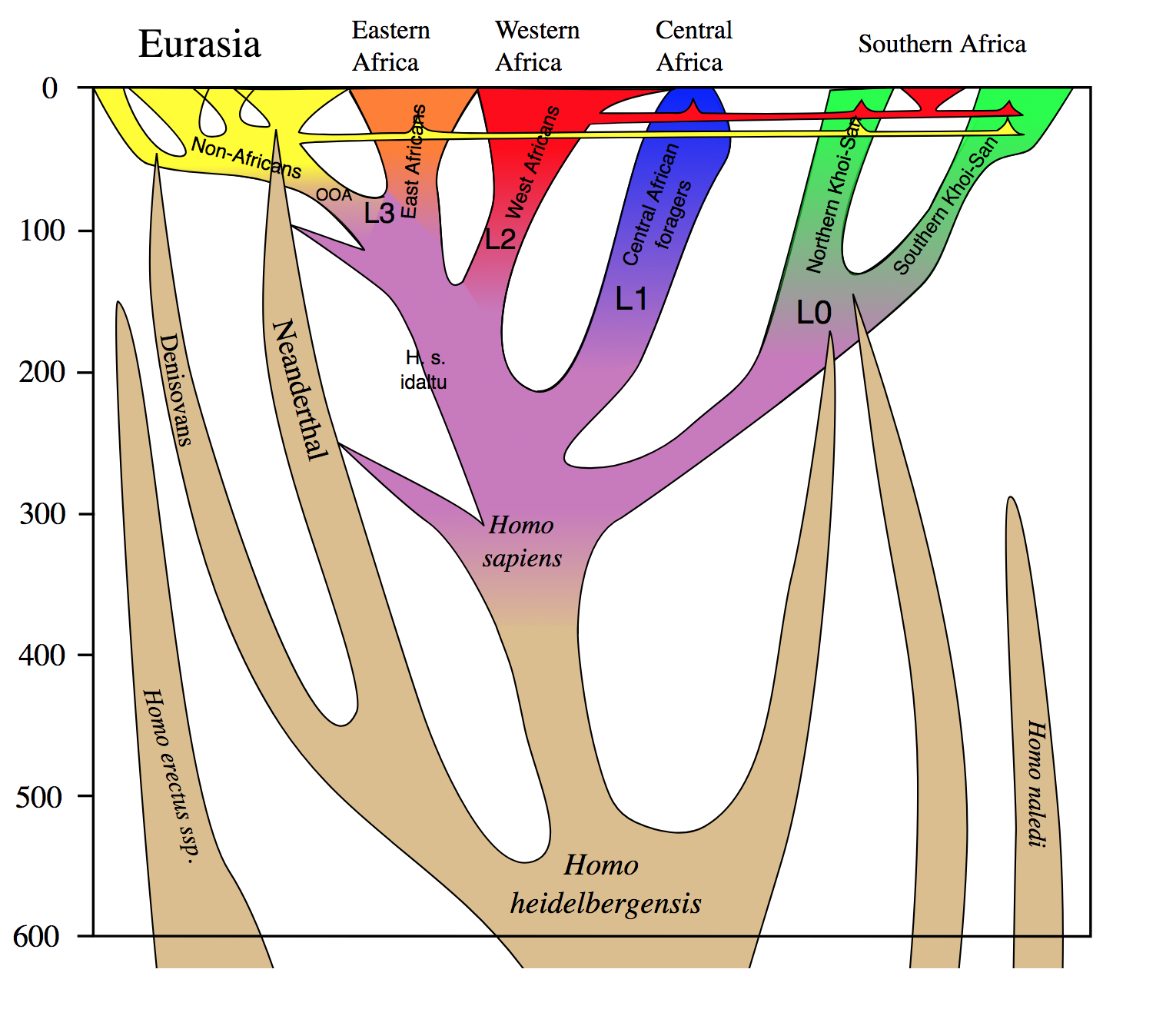 A diagram showing, in part, how Neanderthals and Denisovans split off from their common ancestor with H. sapiens.

The West African populations that have the unique genetic variations, such as the Yoruba of Nigeria and the Mende of Sierra Leone, have somewhere between 2% and 19% of their genetic ancestry attributable to the ghost lineage. And while details regarding the ghost lineage are obviously difficult to glean, the researchers say that the mysterious branch of humans likely split from hominid ancestors before the split between modern humans and the lineage that would become Neanderthals and Denisovans took place.

After its separation from the common ancestor that would eventually split off into H. sapiens and the branch that would split off into Neanderthals and Denisovans, the ghost lineage eventually “reconnected,” shall we say, with H. sapiens roughly 50,000 years ago. A New York Times article on Durvasula and Sankararaman’s paper notes that this means the interbreeding between modern humans and the ghost lineage was taking place in West Africa at the same time modern humans were interbreeding with Neanderthals and Denisovans in Eurasia. 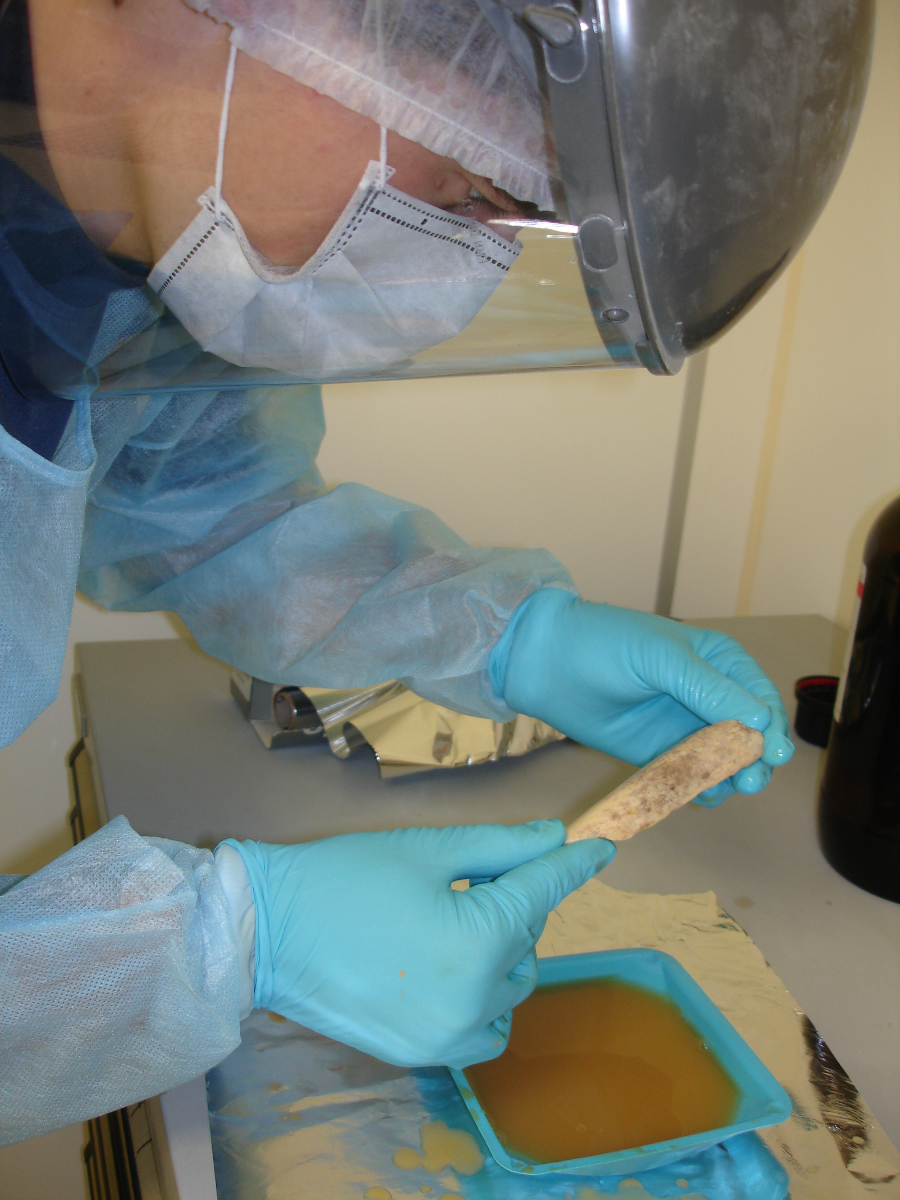 A geneticist extracting Neanderthal DNA samples from fossils. This research is unassociated with the research being done by Durvasula and Sankararaman.

As for the future of Durvasula and Sankararaman’s research, it seems the goal now is to sequence the genomes of more people from Africa. “One limitation of our study is that we have mainly sampled present-day West African populations,” Sankararaman told Discover, meaning that the pair of researchers don’t know how far this ghost lineage spreads throughout the continent. Figuring that out, as well as finding fossils with a genome that has genetic variations like the ones displayed by the Yoruba and Mende, will help to bring this ghost lineage to back to life.

What do you think about this possible “ghost lineage”? Are you surprised by all of the interbreeding between the different members of the genus Homo, or is this just life doing what life does? Let us know your thoughts in the comments!