Take TableTop Games from Good to Great By Modding Them - Nerdist

Take TableTop Games from Good to Great By Modding Them

We’re all familiar with the idea of modding a video game. User-created additions, fixes, or cosmetic re-themes provide a veritable rabbit-hole of possibilities you can fall into and never climb out of again. More and more gamers are applying this similar creativity and DIY design approach to table-top games as well. With 3D printing, Print-on-Demand services, and the ubiquity of design software, it’s easier than ever for anybody to create a professional looking add-on, tweak, or re-theme to their favorite table-top games. 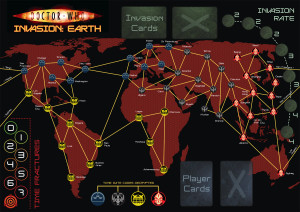 Just like their software counterparts, some table-gaming mods fix bugs or improve the gaming experience. AEG’s Thunderstone is a great game out of the box, but I’ve never met a gamer who went back to playing it vanilla after trying its fan-created epic variant, which is not only more fun, but requires a lot less house-keeping in setting up the game. The epic-variant of Thunderstone is also of note in that it’s one where the game company saw the value  of the fan-created variant and officially adopted it into their rule book.

There’s no need to settle for a game that’s eight out of ten. Take your copy and make it into exactly what you want! Artist Carl White re-themed his copy of Pandemic when his daughters were disinterested in playing it due to the original theme of a global plague. “Rather than push it I’ve decided to use this as an opportunity to retheme the game with a theme dear to their hearts: Doctor Who.” 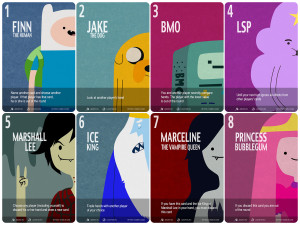 Other gamers may take a game they like and re-theme it to other properties and franchises to turn it into a game they love, creating a unique cultural artifact all their own. If you like chocolate and peanut butter, why not combine them? Alek Ludofan followed this ‘rule-of-Reeses’ in 2013 when he made up his personal copy of the card game Love Letter with an Adventure Time theme. Love Letter has the distinction of being the most re-themed game by fans, for obvious reasons; it has a great base with more or less an arbitrary theme, only 16 cards, but fun for just about any group of players.

I took my own shot at re-theming that game a few years ago. My wife and I were giving her two nieces Love Letter for Christmas. I thought that it would be neat to also make them a copy with a unique theme so they would have this one-of-a-kind game growing up. Being raised in a proper home environment, my nieces were quite keen on dragons at the time. I went to them and said, “guys, I’m really in a bind, I need eight pictures of dragons, would it be possible if you could each draw me four?” They were at an age where a grown-up coming and asking for pictures of dragons to solve a 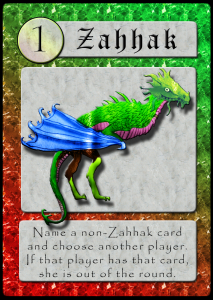 problem didn’t strike them as ludicrous. So they gave me eight dragon pictures (all drawn in light pencil on brown paper which was an absolute nightmare to edit, so if you ever pull this on a relative, make sure you ask for something in marker!). I colored them in, edited the cards together, and printed out an additional dragon-themed version of Love Letter for them that they had unwittingly illustrated themselves. They were pretty surprised when they opened it for Christmas.

Modding table-top games reflects our zeitgeist in many key ways. With the DIY attitude of our age, players are actively engaged with their recreation, not passively consuming it. “People can connect very strongly with art, and if a person’s favorite game has art that doesn’t speak to them, re-theming it is an excellent way to make the game come alive even more,” says artist Jacqueline Boss, who compiled one of the more extensive online bibliographies of tabletop game re-themes. Her words encapsulate exactly how I felt about the game For Sale, which is an awesome game mechanically but with art that didn’t excite me. So I decided to turn my personal copy into a game of Beatrix Potter characters going on pretty adventures, which you can see at the top of the page.

The community of gamers re-theming games is fairly robust, with groups sharing examples on BoardGameGeek, Facebook, and Reddit among other places. If you are curious of what folks are up to, check them out, but if you want to post some of your work, don’t post the complete re-theming in high quality images where another fan could make a print-and-play version of the game. This guidance was articulated in one form from publisher AEG when they couldn’t help but notice the preponderance of Love Letter re-themes (of which they were delighted and supportive). AEG has been paying attention to what the fan-base has been doing with their games design-wise, so it’s no coincidence that there are now numerous official Love Letter re-themes offered by AEG, including an official Adventure Time version in 2015. Whether we knew it or not, the rest of us have benefited by the creative work of gamer-created re-themes as some of that hard work gets fed into official product development and a continual improvement process.

What are some re-themes you would like to see? Have you made any that worked out well? What are other geeky recreation that we do that benefits from an active consumer/producer approach like re-themes, mods, cosplay, and fan-fiction? Let us know in the comments!