A Guide to Fantasy Worldbuilding From Mistborn Author - Nerdist

A Guide to Fantasy Worldbuilding From Mistborn Author

If you’re the kind of geek who grew up knowing how The Silmarillion tied into Lord of the Rings, or why Grand Admiral Thrawn was one of the best Star Wars villains ever despite never appearing on film, you’ll instantly grab on what Mistborn author Brandon Sanderson is doing as a writer. He’s long talked about how when he pitched his metal-magic-minded Mistborn series, he wasn’t just pitching one book, he was pitching a set of worlds ranging from epic fantasy to contemporary political thriller to science fiction saga.

Shadows of Self, out this week, isn’t in any of those preplanned settings. When Sanderson suddenly found himself wanting to write shorter Mistborn stories, he realized he was going to have to carve out a new setting, advancing from The Mistborn Trilogy’s feudal society to one similar to the late American 19th century. In doing so, he’s able to explain some of the tools of his worldbuilding, and why they work on multiple levels. 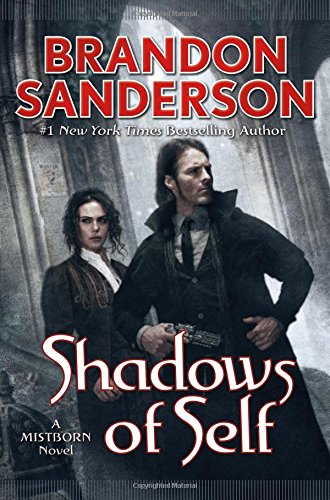 After very nearly destroying the world in The Hero of Ages, Sanderson is using Shadows of Self to scope back down to the fantasy heist archetypes he was interested in when he wrote The Final Empire. Here, he’s slowly replaced the Mistborn with the Twinborn, who have some Allomancy and a bit of Feruchemy–another magic system set up in the last trilogy.  In Sanderson’s words, “I took one of each of those powers, put them in one person, then looked to see how an expert would mold these two specific powers together, to see the unique combinations those powers blend together.”

“It’s been fun for me in the new trilogy to make characters like that–who are experts in only one or one forms of magic instead of all of them, to give them tasks they need to work together on.”

Sanderson says limitations on those systems are what make them interesting. He points out that by clamping down on the powers his own characters have, it lets them express themselves through that magic. “Compare the art of Allomancy to Magneto’s superpowers from X-Men,” he points out. “Magneto can just sort of do whatever he wants with metal, but Allomancers push and pull on metal and deal with the laws of equal and opposite reaction. That means I get to have more fun in a lot of ways and force characters to be creative and think intuitively about using their abilities.”

Thinking about characters also helped Sanderson develop this new, unexpected Mistborn setting from the ground up. “Wax, our hero, is a grizzled sheriff out in the roughs, who gets a letter saying he’s inherited his noble family’s house title. [He] struggles in the big city, moving through corrupt high society and prowling the streets looking for criminals he’s used to dealing with.”

“As a reader, I’m interested in a wide variety of conflicts—the world can’t always be ending. Here, we’ve stepped back from ‘the world is ending’ to ‘one person has their world upended,’ and that’s done a lot to drive how the world grows.’

Religion has also been an important stamp in Sanderson’s growth of the Mistborn world. In the first trilogy, various religions and cults were exposed to be machinations of forces both good and evil, but Shadows of Self takes the epic events of the first series and makes them both history and a religious foundation for the new characters. To Sanderson, that’s important for the genre. “Fantasy is often what happens when the power of gods is given to people instead, so the religion those gods come from is a major aspect of a lot of people’s lives,” he says.

“What do we do when we have the power of the gods in our hands? How does that transform us as people? How can we interface with the gods when we have these powers? That’s all interesting stuff to me.”

For Sanderson’s stories, the reader gets an inside look at the machinations of religion, and sees how it weaves through the world both in a literal and figurative sense, especially when it’s so closely tied to history, and history is essentially what he’s building as he marches forward in time with his writing.

Lastly, Sanderson touches on the notion of legacy characters—characters who, through some reason or another, show up in one part of a saga, then survive long enough to interact with the heroes of the next chapter. (Think Katara or Zuko from Avatar: The Legend of Korra, or even R2-D2 of Star Wars.) Sanderson’s specifically chosen two supernatural characters (among others), from the Mistborn trilogy but he says their magically-driven long lifespans is just a side benefit to their real purpose here. “On the one hand, they help ease readers from the first trilogy in,” says Sanderson. “On the other hand, these people had growth arcs in the first books, but we didn’t see the end of those arcs. There were already hints there stories weren’t done. So when they show up, they have a reason to be in this new world.”

And according to Sanderson, while they don’t need to get directly involved in Wax’s current struggles, their presence does tie into a larger brewing conflict that will help anchor the many parts of the Mistborn world Sanderson hopes to bind together.