Miniatures, Monsters & (Some) Mistakes – My First Games of Warhammer 40K

It has been some time since I began my journey into Warhammer 40k but the game has never been far from my mind. My basement is filling with little plastic soldiers and I’ve driven to work with paint-stained fingers more than a few times. I’ve even begun reading some novels from the Black Library. To say that I’m enjoying this game – maybe hobby is more accurate – is an understatement.

My first full 2,000 point game of Warhammer 40k was amazing. I forgot to give my tanks weapons. I forgot to bring my tanks and my gracious opponent allowed me to use some stand-in miniatures. It was messy and complicated and frustrating. But it was amazing. My Orks charged down hills and smashed into my opponent’s Thousand Sons marines. Magnus, his demonic demi-god Primarch, destroyed entire units with the pointing of a finger and the rolling of dice. My weapon-less tanks ineffectively attempted to run over his marines only to pull a U-turn and run away as I used helicopters to deliver bombs into the heart of his infantry forces. 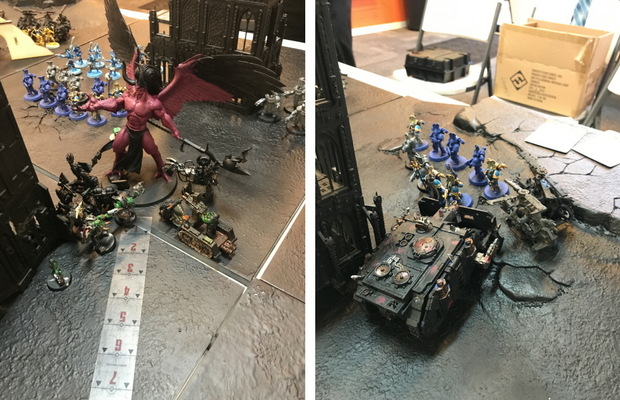 The more I play 40k the more I appreciate how the intricate rule system is used to reinforce the narrative that is playing out on your table. While the core rules are rather simple on their surface, there are myriad winkles and systems to wrap your head around. Something as simple as shooting an opponent is a series of at least 3 rolls. Coming from the world of board games this initially seemed needlessly complex, but I’ve quickly come to appreciate how those rolls are used to give each weapon and unit their own flavor. I can then outfit individual models (or tanks) differently to serve different tactical purposes.

A great example of this can be seen in flamethrowers. The first roll in a sequence of shooting determines whether your unit’s shot is on target. My Orks aren’t so great at shooting; normally they have to roll pretty high to even land a hit on an enemy. But even an Ork can hit someone with gout of flame. As long as your models are in range, flamethrowers can ignore that first roll: they hit automatically. Death Guard Marines are basically walking bags of rot and disease and thus gain a 4th roll every time they’re attacked. Roll well and you can ignore the damage, as taking a bullet to the gut doesn’t really do anything when you don’t have a gut to speak of. 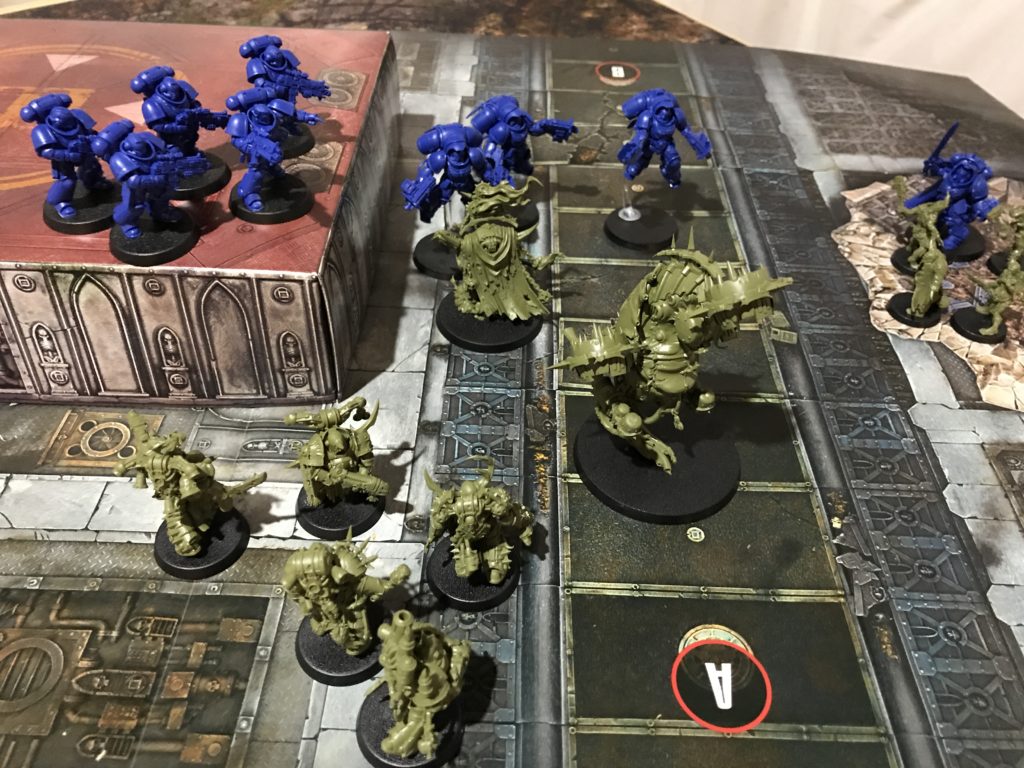 There are hundreds of different weapons, units, and ways to deploy your forces and the ruleset builds on itself to make sure that all of those options feel different. Miniatures look different and play different; nothing feels like something else with a different skin. While this provides a strong framework for competitive play it also feeds into the idea that your battle is but a small part of a grand story.

The Dark Imperium starter set launched alongside a novel of the same name. This book tells the story of valiant Space Marines attempting to restore the glory of the Imperium while the Chaos God Nurgle spreads disease in the very heart of that imperium. The units and characters in the book appear in that starter set and in the other two sets you can pick up. Know No Fear provides an excellent launching point into the hobby while introducing you to those rules through narrative play. You aren’t just smashing two armies against each other; the 6 scenarios tell the story of a Death Guard assault on a major city. 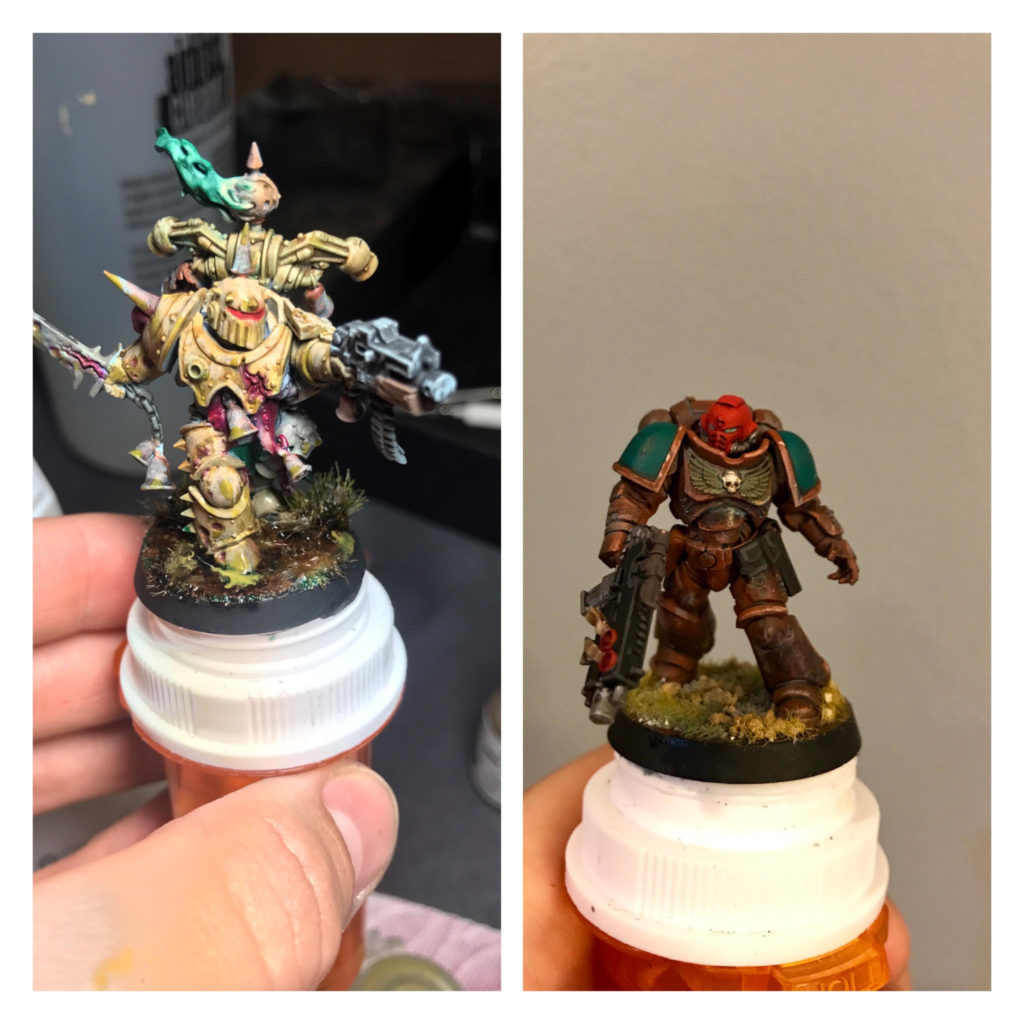 Similarly, every game of 40k I’ve played reinforces the stories I’ve read. In the novel the Death Guard advance slowly but inevitably, bringing a plague of contagion with them. On the table, Poxwalkers claw at Space Marines replenishing their numbers with a freshly raised undead every time they kill something. Space Marine Inceptors fly across the pages of the novel on jetpacks, striking tactically. Meanwhile, I can put them onto the table in the middle of the game, dropping them in behind enemy lines.

Even the structure of the game helps tell a story and give units personality. Not every game is a fight to the death. While my Ork Tanks were wholly useless and Magnus was removing entire units from the table at a time, I had the advantage in claiming objectives. In another game, I pumped my arms triumphantly when I destroyed a Death Guard  Bloat Drone only for my opponent to take the win because my opponent had paid attention to the actual victory condition. All she was trying to do was move a couple units off the board and I had completely ignored those Poxwalkers in my bloodthirst.

Narrative informs mechanics, mechanics create narratives. It’s a cycle that bears out every time I play. As I add units and rules they build on previous plays. My experience so far has been one of complexity without complications. There are certainly datasheets to review and loadouts to remember but things make sense and the specifics are readily absorbed. I just need to remember to put guns on my tanks.

What is your most memorable 40k story? Tell us in the comments!