When people think of Vulcan mind melding themselves to other living beings, it’s usually a romantic, or at least platonically appealing notion — sharing a singular consciousness with a significant other is definitely worth at least a few thousand “Love is…” strips. But how about mind melding with a cyborg rat? It may not be the most delightful gray matter-fusion fantasy, but thanks to researchers in China, it is now a reality.

According to a paper published in the journal Scientific Reports, which comes via Discover, researchers at Zhejiang University in China have demonstrated the ability to control “rat cyborgs” using wireless inputs sent directly from human brains. And while it may seem incredible, that statement is valid without a drop of exaggeration: The researchers literally refer to the rats controlled by human brains as “rat cyborgs” in their paper, and the control inputs — which included forward, reverse, right, and left — were sent directly from human neurons to rat neurons using only electrical signals turned into encodable and decodable instructions. 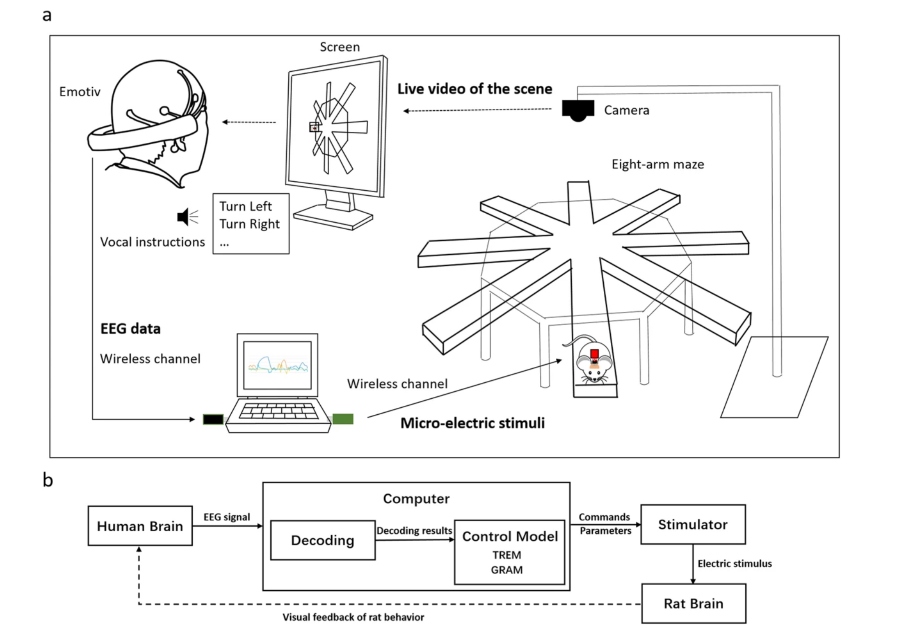 As shown in the diagram above, the movement instructions were read from a human brain using an electroencephalogram (EEG), which were then wirelessly sent to a computer, which decoded the instructions, turning them into a series of electrical impulses delivered wirelessly to a stimulator implanted in one of the test rat’s backs, thusly dictating the rat’s motor functions. In terms of how the EEG read the original instructions from the human brain, it picked up on varying electrical impulses based on thoughts of moving one’s left and right arms (which steered the rat left or right) and blinking (which moved the rat forward or backward).

The researchers’ goal in regards to this particular experiment was to have the human brains direct the cyborg rats back and forth through the pathways of an eight-armed maze, as well through more complex mazes with multiple levels that called for directing the rats up and down elevated surfaces.

Ultimately, this research was conducted to demonstrate the feasibility of brain-brain interfaces (BBIs), which could be used to generate direct, wireless communication between two human brains — without the need for any of that cumbersome talking, listening, or gesticulation. One scientist who spoke with Discover noted that “the holy grail” of BBIs would be the ability to send feelings and emotions directly from one human brain to another, which is apparently completely plausible. Let’s hope this really is what BBIs are used for in the future, rather than controlling some kind of unstoppable cyborg rat army — mind melding with creatures who don’t have free will doesn’t really have those “final frontier” vibes anyway, right?

What do you think of this BBI between human brains and cyborg rat brains? And if BBIs do become commonplace, who would you like to mind meld with most? Let us know in the comments!