Sanity is delicate, like the string of a harp. Graze it gently, and it reaps harmony. Pluck it too hard, and it cuts like glass. In his second feature film, director Ari Aster shows how acutely in tune he is with melodies of mania and pain. Just as Hereditary sliced into the human psyche with a soft blade, so does Midsommar investigate the dark corners of the mind: how we process impossible grief, how codependent we are in the aftermath, and just how far we’ll go to obtain a semblance of what passes for peace. Midsommar is a dark and cruel movie, set in pure daylight. And in that dichotomy of setting and tone, Aster stumbles on something close to transcendence.

The film centers on Dani (Florence Pugh), a young woman grappling with a recent impossible loss. We learn right away that mental illness is steeped in her DNA; she laments her bipolar sister while gulping down an Ativan. Engulfing you in the mind of a mentally fragile individual is what Aster does best, and just like Toni Collette was uniquely devastating in Hereditary, Pugh uses Dani as a vehicle to demonstrate the highs and lows of the manic mind. As the fresh wound of grief changes the color of her life—the film quite literally fades from a dark, cold opening into a technicolor summer, the first of its many allusions to The Wizard of Oz—we see how gravely Dani’s illness and grief warp her relationship with longterm boyfriend Christian (Jack Reynor). Christian was on the verge of breaking up with Dani before her loss, but instead takes her on the summer vacation he had planned with his friends, hoping it might revitalize the relationship, or at the very least forge some new path of self-discovery.

And so they’re off, joined by friends Mark (Will Poulter), Josh (William Jackson Harper), and Pelle (Vilhelm Blomgren), who is taking the group to the Swedish commune where he grew up. Upon their arrival in the Scandinavian pasture, the group takes magic mushrooms, which give Dani a series of garish visions that might just be prophetic. The mushrooms are their tornado to Oz; suddenly, they’re swept into Pelle’s magical world, tucked far away in the fairy-green hills of Sweden, where the people wear white cotton frocks and flower crowns, and where a series of oddly shaped buildings house their beds and traditions; the walls are painted with strange symbols, flowers, and arresting images of naked bodies sliced open. The group arrives just in time for Midsommar, a solstice-inspired celebration that happens once every 90 years. But the Americans aren’t quite prepared for how sharply their culture diverges from these peculiar Swedes, whose twinkling exteriors masque their seemingly sinister customs. 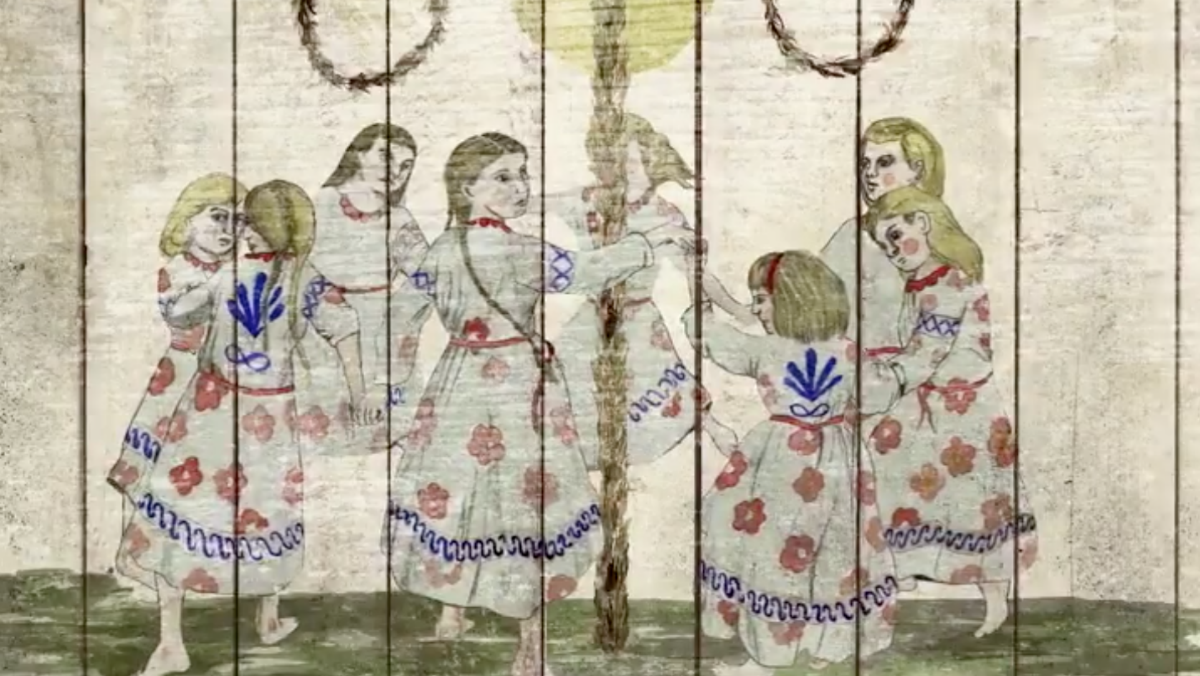 What follows is a series of grave encounters, clashing identities, and bloody body horror that rivals the depths of depravity Aster demonstrated in Hereditary. If that movie’s shocking head scene made you squirmy, Midsommar is here to annihilate your dreams with even more despicable imagery. The group, who are also partially there for their college thesis, are exposed to ritualistic behavior that shatters their ability to comprehend the world around them, and to maintain their interpersonal relationships. As tensions rise, you expect any one of them to run off or explode in frustration. Anything can happen in the daytime, and because this is high summer, when the sun sits heavy in the sky for longer-than-usual hours, with the relief of a good night’s sleep feeling impossibly far away.

Midsommar is, at its core, a breakup movie wrapped in a folk horror blanket made of wildflowers and thorns. But it’s also a fascinating debriefing our cultural prejudices. At one point, a character suggests that a violent, consensual death is better than rotting away in a nursing home, and it’s hard to argue with the logic as presented. Is this sect of Swedes revoltingly backward, or is their way of life beautiful and cyclical? And does adjusting ones set of morals from standard American to something folkloric betray principle, or clear the path for enlightenment? Is Dani’s journey a descent into madness, or euphoric and pure?

Midsommar doesn’t merely present these questions on a platter; instead, it sucks you into a rainbow-hued void and screams them in your face, while pummeling you with gore, sex, and hallucinogenic visions. The movie itself feels like a trip, one where you stumble back into consciousness feeling purposeful, renewed, and maybe a little terrified. Aster doesn’t hold your hand, he doesn’t care about your expectations, and her certainly isn’t preoccupied with making things easy to look at or process. But he gives you an experience unlike any other. By the end of its breathless two hours and 20 minutes—which whiz by—Midsommar has its dirty hooks in you. It’s pure, guttural horror of the demonically human kind. It’s melodious, and it’s a raucous plunk of keys. You’ll leave humming its strange tune, looking suspiciously at your own life’s practices. Some will scurry from its truth, others will lay with it in the sun.