According toÂ Deadline, the Star Trek television universe will continue to expand. In addition to the animated series Lower Decks and the Captain Picard centric series coming to CBS All Access, another Trek spin-off has been confirmed, this time starring Michelle Yeoh asÂ Captain Philippa Georgiou. Or, to be more specific, the sinister version ofÂ Captain Philippa Georgiou from the Mirror Universe, introduced in the back half of the Star Trek: Discovery‘s first season. 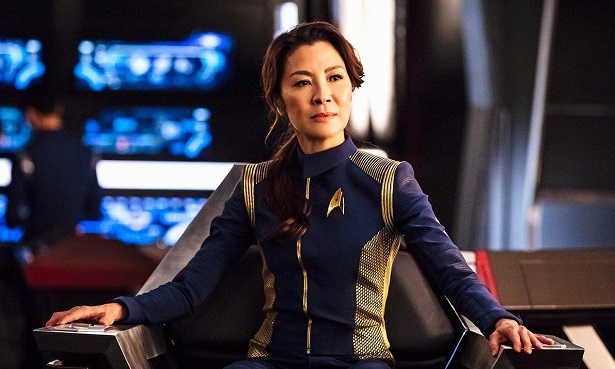 New guru of all things Trek, Alex Kurtzman, will be overseeing the series, withÂ Â Bo Yeon Kim and Erika Lippoldt serving as executive producers. Yeoh will be headlining the show, but it appears the spin-off will be an ensemble show in traditional Star Trek fashion.Â Captain Georgiou was introduced in the pilot of DiscoveryÂ as the wise and noble captain of the Starship USS Shenzou. She was the mentor to Sonequa Martin-Green’s character, but Georgiou was killed off in that first chapter. Yeoh later returned in the series asÂ Philippa Georgiou’s sinister counterpart from the Mirror Universe, where she ruled as Empress. She then came to the Prime universe, took her counterpart’s place, and became a part of Section 31, Starfleet’s secret black ops division.This series is historical for two reasons: chiefly, it will be the first Trek series with an Asian lead. But secondly, it will be the first series in Star Trek history where the lead character is, for all intents and purposes, evil. Given how truly sadistic the character was portrayed as in Discovery, it will be interesting to see how the showrunners make us sympathize with her.