Gruff Is A Different (And More Violent) Kind Of Goat Simulator

Sure, you want to be the best (the best there ever was) with your assorted menagerie of captured creatures. When it comes time to face off against your opponent, however, playing nice really isn’t going to guarantee you the win. You need to be devious, use every trick you have in hand, and it helps to be a bit weird. Welcome to the game of Gruff, where you control a Shepherd and three mutated goats in a grotesque battle of mutations, attacks, and weirdness.

To begin, you and your opponent must choose a single Shepherd and three Gruffs to play with. Each Gruff has a deck of fifteen cards you must choose eight of to include in your personal abilities deck. Once each player has selected their Shepherd, Gruffs, and formed their abilities deck; the only thing left to do is decide who goes first. The rule book includes a couple tutorial decks that do a fantastic job of illustrating how the game is played; which is strongly recommended to new players, especially if you have never played a game like this before.

The objective is fairly simple: be the first to land a killing blow on the opposing Shepherd to win the game. You do this by attacking your opponent’s Gruffs with your own, and if a Gruff is strong enough to get through their defenses, they will damage the Shepherd with whatever power they have left. Gruffs have three stats; their Means, their Fat, and their Weird. A Gruff’s Mean defines its ability to attack, where their Fat defines their ability to defend. In combat, players will compare the Mean and Fat of the battling Gruffs to determine if the attacking Gruff manages to kill the defender, deal any damage to the Shepherd, or simply bounce off.

When a Gruff is activated, whether or not for use in an attack, the commanding Shepherd will gain Crazy equal to the Gruff’s Weird. This is an important resource used by the Shepherd to play ability cards from their hand; which includes one shot Actions, temporary Conditions, and permanent Mutations. These cards do everything from deal direct damage, to granting bonus stats to your Gruffs. They may weaken your opponent’s Gruffs, or even allow you to avoid a defending Gruff altogether. In any case, the way you play these cards can and will make or break your success in each battle. 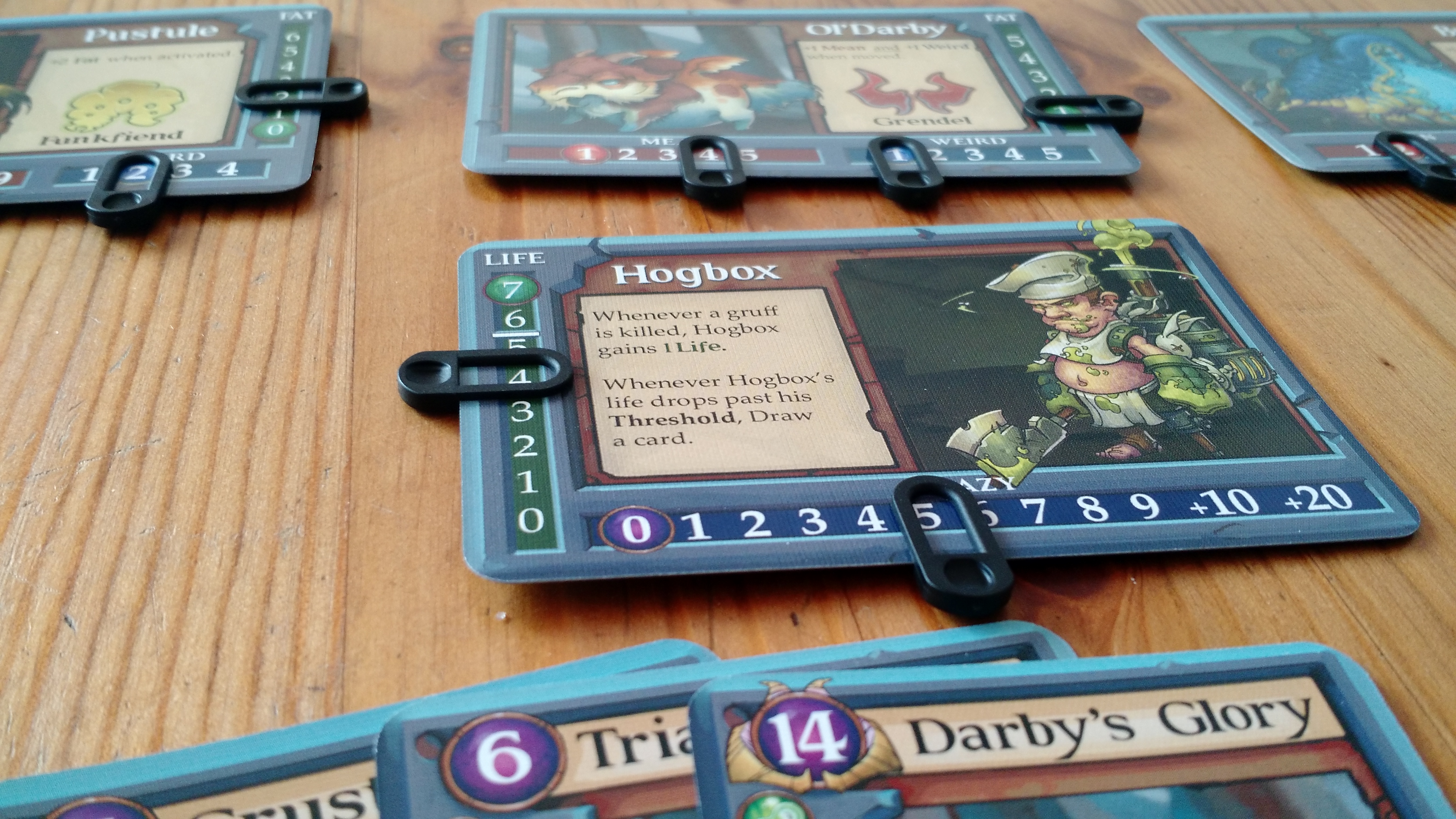 I recently got my hands on the game thanks to Brent, the co-founder of Studio Woe. Brent’s wife Virginia, and business partner at Studio Woe, is the talented artist behind most of the imaginative creatures in Gruff, many of which were drawn before the conception of the game itself. While working on over a dozens other fascinating franchises like Warhammer 40k and Darksiders, the couple began developing this game’s concept. Later, Gruff became an independent board game developer success story, reaching and exceeding their pledge goals on Kickstarter, and later making the game available to brick and mortar stores all over the US.

In every sense, Gruff has been a labor of love for the folks working on it, and you can see it in every monstrous detail of the fun but terrifying art style. Gruff‘s simple concepts allow for both new gamers to  have a competitive card game experience, while still giving seasoned players the depth of a full collectible card game. While at the convention, I even got a chance to see a few of the cards from their first expansion in action. With new terrors on the horizon, now is the best time to see how crazy this mean, fat, and weird game can really be.