Mary Poppins brings magic wherever she goes. When she comes back to take care of the now grown Banks children in Mary Poppins Returns, she’s still a nanny like none other. She’s a deliverer of spectacles, a creator of wonder. And as she did in the 1964 film, Mary (Emily Blunt) will sweep her charges and companionâ€”this time itâ€™s Burtâ€™s protÃ©gÃ© Jack (Lin-Manuel Miranda)â€”into an animated world filled with costumed animals and enchantment. It all begins with her umbrella and a ceramic Royal Doulton bowl…

“Mary Poppins picks up her umbrella, and she holds it over her head and starts spinning it and the three-foot umbrella grows into a thousand-foot tent,” production designer John Myhre explained to Nerdist and a group of reporters on the set of the film. “Before our very eyes, she makes the Royal Doulton Music Hall appear and day turns to night; light bulbs all over the tent light up and the kids go inside to see a show put on by Jack and Mary. We turned the inside of this animated tent into an animated Victorian English London music hall.”This all happens within the confines of a Royal Doulton bowl in the Banks’ home because of that good olâ€™ Poppins sorcery. Animals in dapper ensembles (including the penguins from the original film) join their friend Mary for a visually striking sequence. The costumes from “The Royal Doulton Hall” number reflect the Victorian era but in a cartoony way. Costume designer Sandy Powell explained they wanted it to appear as if the clothing had been drawn by the animators. “[We wanted] to make them fit with the animated world rather than look like theyâ€™d been plunked on top of it. So having announced that this was an idea Iâ€™d like to try, I had to prove that it would work. I had no idea if it would, so I spent a good couple of months experimenting on different textures of fabric.”

In the end, it was about finding which materials would hold paint, because to match the animation, Powell’s team applied fabric paints by hand to get a cel-shaded, cartoon drawing look; the results are vivid and unique. “I got in touch with the animators at the beginning because I wanted to see examples of how they were going to paint the style of the animation, the style of the drawing, which you can see is a very old-fashioned line outlines and watercolors. I wanted the effect on all of these costumes to look like watercolor on paper with the white coming through,” Powell recalled.This approach to the costumes was one aspect of taking the idea of the animated sequence from the original and making it stand apart. The sequence feels fresh while including two-dimensional animation created by animators old and young. “I really thought it would almost feel new again because it hasnâ€™t been done for so long, and what was really quite extraordinary is that many animators came out of retirement [to work on this],” director Rob Marshall said. “Also very interesting, we had a lot of animators in their 20s who were much more interested in doing the old school animation as opposed to the new computer-generated work, and it was fascinating to see them at work.” 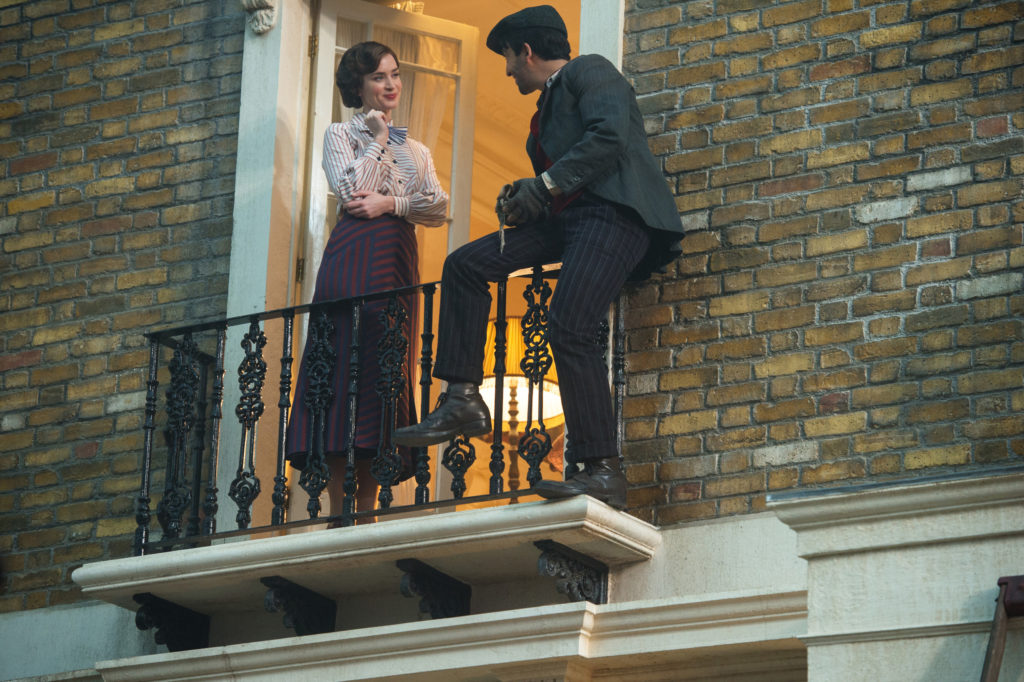 Using technology that Disney didn’t have available in the 1960s, they were able to move the camera through in a two-dimensional fashion to make the viewer feel more like they’re inside the illustrations. Marshall elaborated, “When you see the film, you are in this 2D hand-painted world but in a three-dimensional way. It’s why our post production has been longer than normal. It is live action and animation so there’s this wonderful interaction between the two, and I believe everyone feels it was worth it.”Mary Poppins ReturnsÂ debuts in theaters on December 19, 2018.