Marvel’s THE ETERNALS May Cast GAME OF THRONES’ Richard Madden

The Eternals cast is beginning to shape up quite nicely, as we learned recently that both superstar Angelina Jolie and Kumail Nanjiani are both looking to join the cast. Now it looks like the film has found its lead, as Game of Thrones‘ Richard Madden appears to be in talks to join the cast as Ikaris according to The Hollywood Reporter.

Ikaris is largely seen as the lead character in the Eternals comics. He is said to be 20,000 years old, and thanks to his incredible mental and physical powers, he was mistaken for a God by ancient humans. And it seems much of the story of the film will involve a romance between himself and Angelina Jolie’s Sersi. The character is blonde in the comics, so maybe that’s why Madden has been sporting a platinum streak in his hair lately? Either way, the Jack Kirby drawn seen below is now something that may actually happen in the MCU. 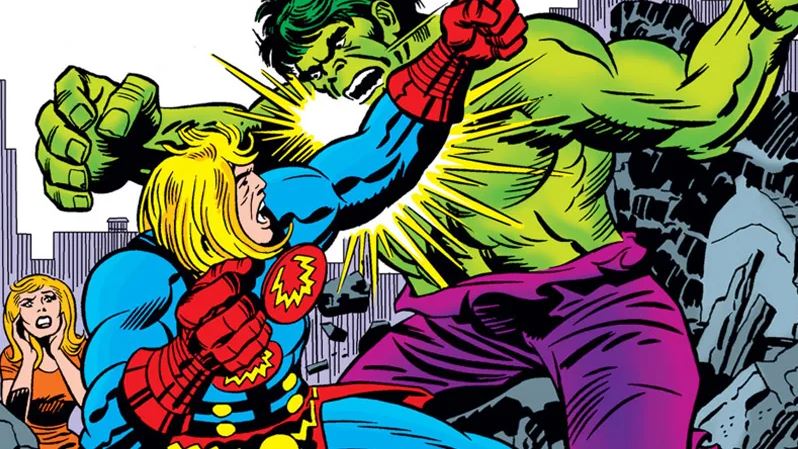 The Eternals is scheduled to go into production this year for a 2020 release.

The next big Marvel Studios film is no longer hypothetical, as they have just announced that The Eternals has a director attached officially. Variety is reporting that director Chloe Zhao, who recently made a big splash with her critically acclaimed Sundance films The Rider and Songs My Brothers Taught Me. Zhao was once in consideration to direct the upcoming solo  Black Widow movie, until Marvel gave director Cate Shortland the job. The script for the film is from the duo of Matthew and Ryan Firpo.[/nerdist_section] Based on the classic cult comic book, the plot for The Eternals, according to THR, is described as being about “super-powered and near-immortal beings known as Eternals and a more monstrous off-shoot known as the Deviants that were created by cosmic beings known as Celestials.” The report also confirms that the main characters will be Ikaris, “a man fueled by cosmic energy,” and Sersi, “who relishes moving amongst humans.”

So while all of that is in keeping with what we know about the comic book, just who are the Eternals in the context of the greater Marvel Universe? The characters were created by writer/artist Jack Kirby, the man who was responsible for co-creating the vast majority of the Marvel Icons with Stan Lee. The Eternals was very much his passion project, and was inspired by the book Chariots of the Gods, which popularized the theory that humans on Earth were influenced by ancient aliens thousands of years in the past. The comic series first appeared in 1976, and was much hyped about, as it was Kirby’s big return to Marvel after many years away at DC Comics.

The original Eternals series only ran for two years and nineteen issues, and was never the huge hit Marvel wanted. Nevertheless, many plot points from the series were picked up and expanded upon in other popular titles, like The Mighty Thor. In the ’80s, they received another 12 part limited series, which further expanded their roles within the Marvel Universe. It was there that it was revealed that the villainous Thanos was actually himself an Eternal.

Twenty years later, Sandman and American Gods writer Neil Gaiman wrote an seven part Eternals mini-series, which received much critical acclaim and reintroduced the characters into the Marvel Universe. A short lived ongoing series followed, which was cancelled in 2009. Unlike most Marvel Studios films, there are less than 60 comics with the name The Eternals to draw from, unlike many of their previous characters who made it to the big screen with hundreds of comics stories to choose from. Traditionally, the main characters of the series have been Ikaris, who is the inspiration for Icarus in Greek Mythology, and Sersi, who herself is the inspiration behind the witch Circe, also in Greek myth. Other main Eternals portrayed in the comic are Aginar, their military leader, Domo, who was instrumental in forming the Kree Uni-Mind which connects them all, Gilgamesh, who inspired the hero of ancient folktales, the Titan called Starfox, who is Thanos’ younger brother, and the psychic Moondragon. Sersi, Starfox, and Gilgamesh have also all been members of the Avengers at one time or another over the years.

One major Avenger from the comics who has yet to appear in the MCU is Hercules. Now, while the character is not an Eternal in the comics, it would make sense for him to be one in the MCU, and a perfect way to finally get a fan favorite character on the big screen. Although no plans for that have been announced, don’t be surprised if the Marvel Cinematic Universe’s Herc ends up being an Eternal, if only because the character is so popular. It should be noted, that in the Marvel Comics universe, the Celestials tampering with human DNA millions of years ago is why there are also mutants on Earth. Is this how Kevin Feige is going to introduce mutants and the X-Men into the MCU, or explain how four astronauts were able to become the Fantastic Four? There are many, many possibilities here.

What do you want to see in an Eternals movie? Let us know down below in the comments.