“I wish I could put you back in my stomach so I know exactly where you are at all times.” Those words from Bao director Domee Shi’s mother Ningsha Zhong are important to keep in mind when you watch the new Pixar short showing with Incredibles 2. The folktale, centered on a Chinese mother suffering from empty nest syndrome, sprung from Shi wanting to do a Chinese version of The Little Gingerbread Man. “Instead of a little cookie coming to life for this old lady, it’s a little dumpling,” Shi told Nerdist. “I wanted to use this dumpling as a vessel to explore the changing relationships between a parent and child, and how not even dumplings stay cute forever, and they have to grow up and leave the nest eventually.” 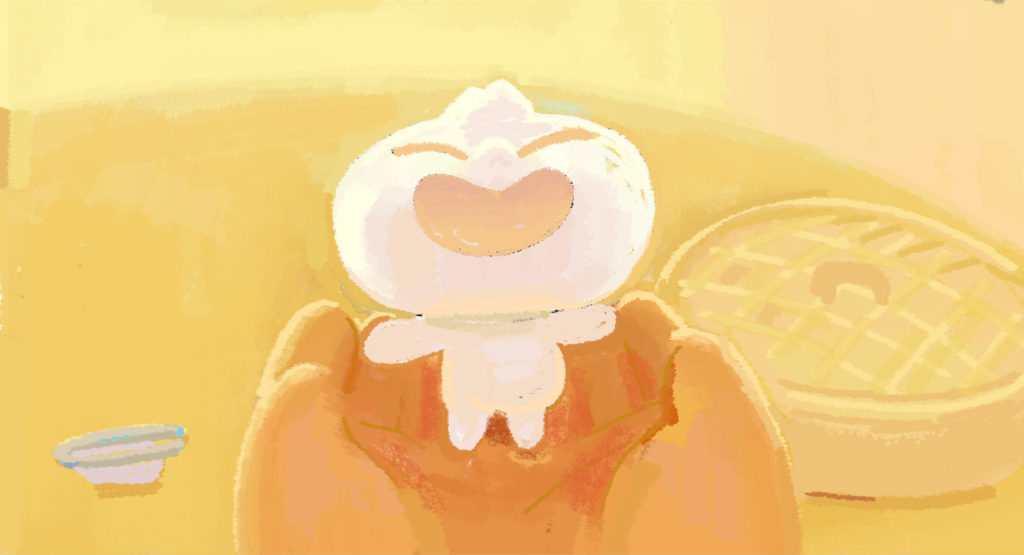 In Bao, which means both steamed bun and precious treasure depending on how it’s pronounced, a dumpling made by the Chinese mother with care and patience comes to life. And making dumplings isn’t something you knock out in a matter of minutes. Preparing dumplings is so labor intensive you have to either really want to eat them or have a desire to share them with those you love. “I’d been taking it for granted until I started making this short. I would eat them so quickly as a kid, not knowing how much work went into it, because my mom would do all of the preparation beforehand,” Shi recalled. “She’d make the dough herself, and make the filling, and I would just help her wrap a couple of them before I got bored and ran away. When we brought my mom on to do dumpling making classes for the crew, she was showing us the step by step process, and I was like, ‘Oh my gosh, there’s so much work involved.’”

“I wish I could put you back in my stomach so I know exactly where you are at all times.” The animators took note of Zhong’s dumpling folding techniques and the hue and sheen of the raw pork filling, taking the time—two months for two effects artists—to boost colors and alter textures to get the pork filling just so per Pixar’s usual attention to the most minute detail. For the overall look for the short, Shi turned to My Neighbors the Yamadas and One Piece for 2D animation inspiration and to Toronto’s Chinatown for the setting. Shi spent time in Chinatown as a girl; she recalled, “Chinatown is such a vibrant and lively and nostalgic place for me, and I wanted to honor that setting in my short. And I wanted to honor the equally vibrant and awesome residents of Chinatown, the Chinatown grannies. I wanted to celebrate their bold colors, their keen eye in picking out the freshest produce.”

Those elements are highlighted in the short, an integral part of the story as Dumpling accompanies his mother on errands and grows up. Her heartache fades as Dumpling blossoms and helps fill what’s missing in her heart, but that doesn’t mean Bao is all sunshine and rainbows. Bao is a fairy tale. The Chinese mother creates a dumpling fantasy to help her process feelings about her son moving away. And depression, and confronting it with food or with withdrawal, is part of Bao’s story—especially in the final scenes, and it’s important how Shi doesn’t back away from depicting it. “What the mom is going through in that moment is definitely a form of depression. I was thinking about my own mom too, and the couple times that she’s gotten really sad, I’ve observed her withdraw and go into her room,” Shi explained. “I wanted to really draw from real life and how people deal with sadness. I wanted to get the specific details of withdrawing from your family and being alone. I think it’s a very specifically female way of going through depression. The men in my life deal with sadness a different way than with women, and so because the main character is this elderly Chinese mom, I wanted to be specific with how she was dealing with this sadness.”

Bao is out now with Incredibles 2.