And you thought this year’s election season was bad! Conspiracy 2: Take the Crown is the newest casual multiplayer set for Magic: The Gathering. Players are meant to draft the cards in groups of 8, meaning they open a pack, take one card and pass it to the left or right, repeating until everyone has cards to make a deck. Then, players build 40+ card decks and group again in 4 player free-for-all matches. One player inevitably becomes the Monarch, then the crown is stolen away multiple times per game. Politics, double dealing, trash talking, and ridiculous cards rule the day, even more so than in a typical Magic multiplayer game of Commander.

That’s what Conspiracy 2: Take the Crown is all about. I recently got a chance to chat with the designers and storytellers behind Conspiracy 2, all in an attempt to determine what in the world was going on in their heads when they designed this freewheeling Magic set, available now. 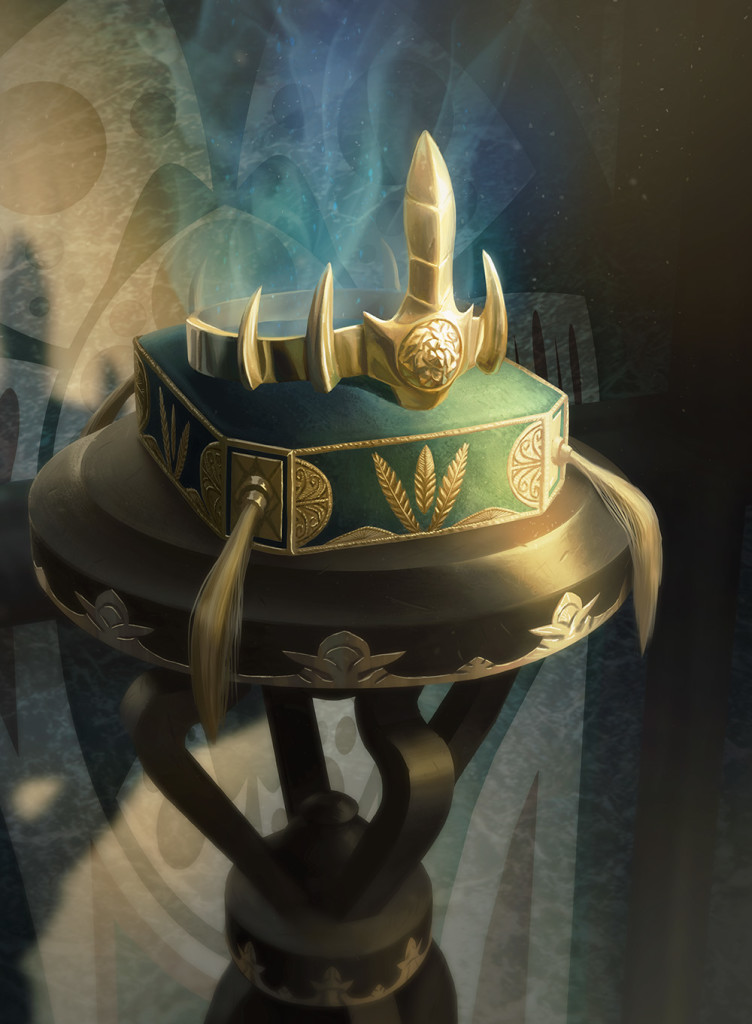 Shawn Main (Senior Game Designer): The first step to designing Take the Crown was to identify what made the original Conspiracy tick. And a huge part of that success was how the draft itself was full of mini-games and crazy shenanigans. We knew we needed to bring back draft-matters cards and find new twists on them. And the biggest shift for us was realizing we could use one of Magic’s core mechanics: color.

In original Conspiracy, all the conspiracies and draft-matters cards were colorless, so everyone weighed them equally. But with color, Pyretic Hunter and Garbage Fire actually float around the draft to the red player and, let me tell you, it’s really exciting to get a 9 damage Garbage Fire. 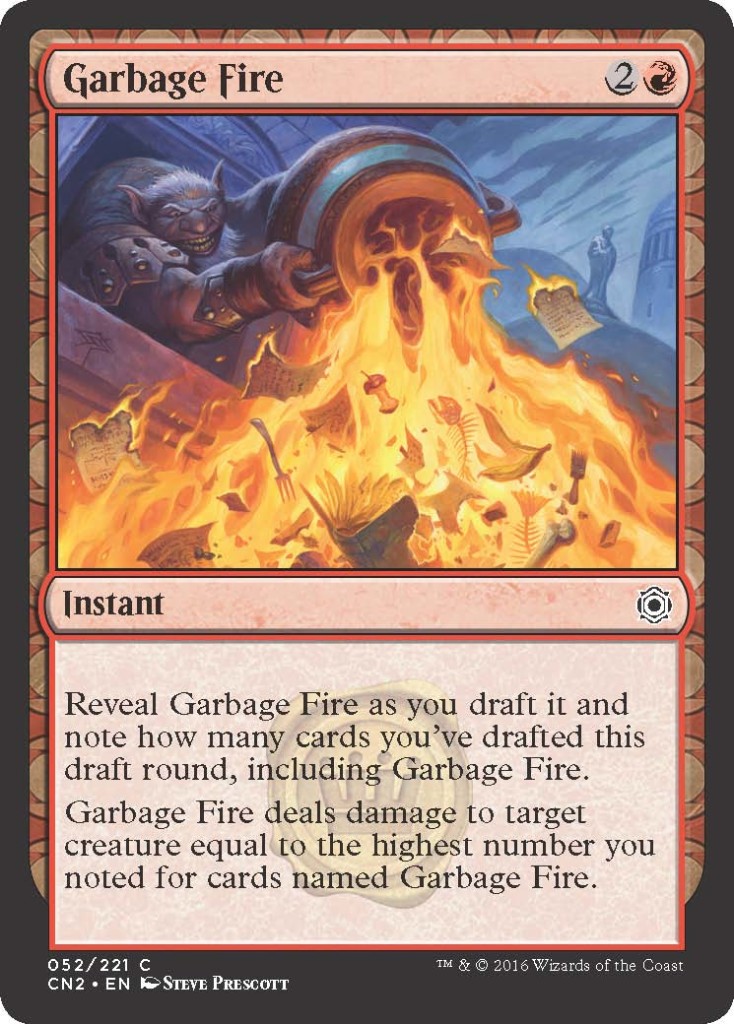 G&S: How much did the story of Brago’s throne influence the design and vice versa? From the outside, it feels like the intricate political machinations of the story had an enormous influence on things like the Monarch mechanic.

Kelly Digges (Story Lead): One of the most enjoyable things about working on this set was how the design and the story were able to influence each other. The Monarch mechanic actually came first, introduced to the design as a resource for players to fight over.

Meanwhile, on the story and art side, [Lead Art Director] Cynthia Sheppard and I were already asking ourselves what was going to be different about the setting of Fiora this time around. We’d considered the idea of Brago being ghost-assassinated and Marchesa rising to the throne, and seeing a mechanic in the set that specifically referenced a change in regime set us firmly on that path. We were then able to go to the design team with the idea of Queen Marchesa, and that in turn inspired the design of her card. The other legendary creatures in the set, as well as the Planeswalkers, came about through a similar back-and-forth between story and design.

G&S: All the splashy reprints like Show and Tell and Inquisition of Kozilek and Berserk seem to be very playable in a Conspiracy game. How did synergy with the new cards factor into the decision on what to reprint?

Ben Hayes (Senior Game Designer): For reprints like Berserk and Show and Tell, we typically don’t consider synergy with the new cards in the set as much as we consider how well the cards will play in the set overall. There was definitely a conscious effort made to pick reprints which felt like they fit the gameplay of Conspiracy.

When looking for reprints, I was thrilled to find Berserk, as it’s both very exciting for people to open in a pack and play with outside Conspiracy, but it also creates hugely splashy and exciting moments inside a Conspiracy game (hint: you don’t have to cast it on your own creature). Show and Tell is similarly more and more exciting the more players you add to a game, so Conspiracy seemed like a fantastic place for it. 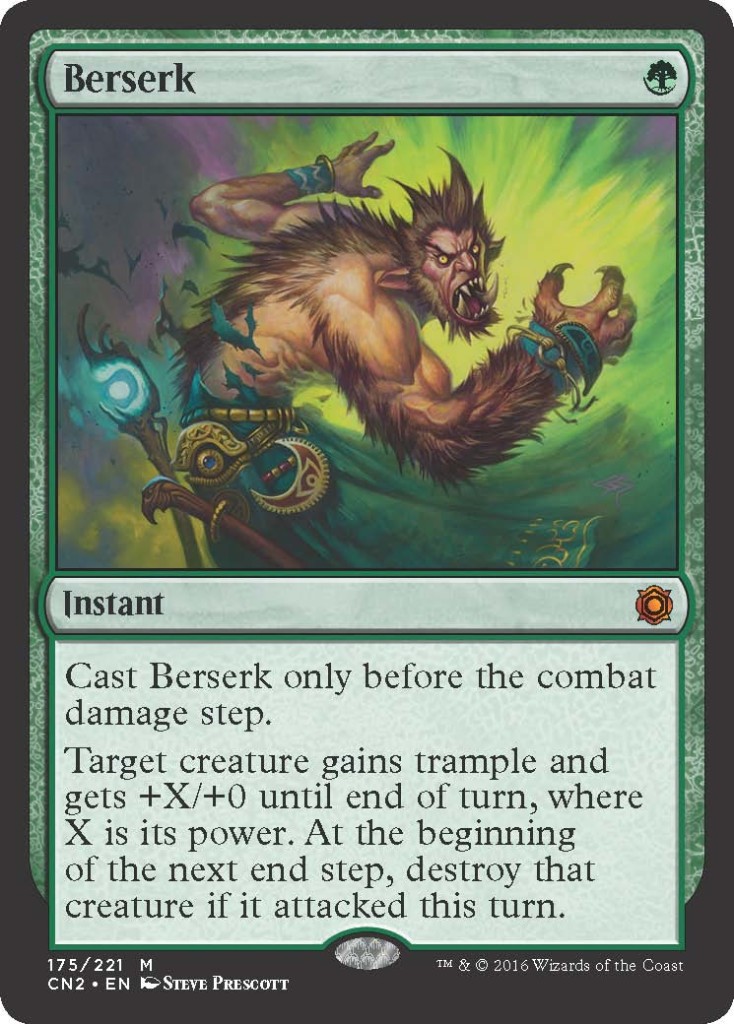 G&S: The story behind Kaya, Ghost Assassin‘s creation has been told on Wizards of the Coast’s Tumblr page. What were the challenges designing her abilities to fit this terrific ghost hunter Planeswalker?

SM: We knew we wanted Kaya to be something special, both as a character and as a card. Her first ability is my favorite not only because it expresses her ability to pass through solid objects, but also because it lets you reset her loyalty. She’s a Planeswalker with no plus ability because she’s a hired assassin, loyal to no one, and that makes for an awesome card. 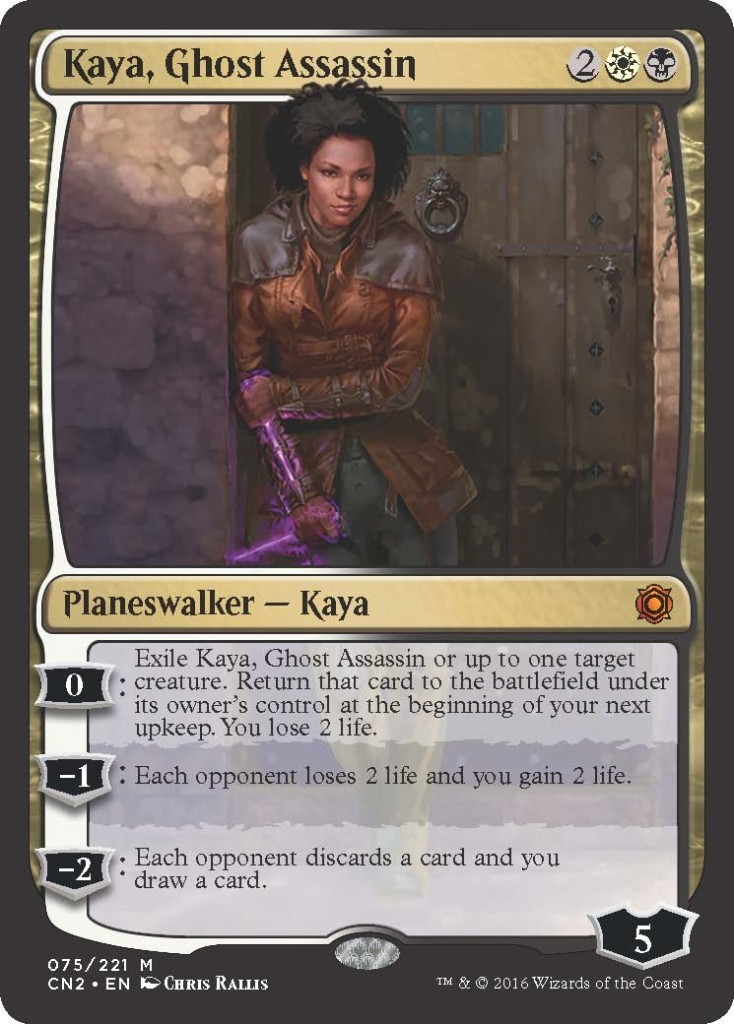 I also got to take a look at a box of Conspiracy 2. Though I didn’t have enough players to draft, I was able to open packs and read both the crazy gameplay mechanics and the rich storytelling provided by the flavor text. Now I can’t wait to hit up my local game store and find out when the next Conspiracy 2 draft is. I only got the chance to draft the original Conspiracy one time and loved it, and I hope to get to draft (and become the monarch, and maybe even keep the throne) many more. 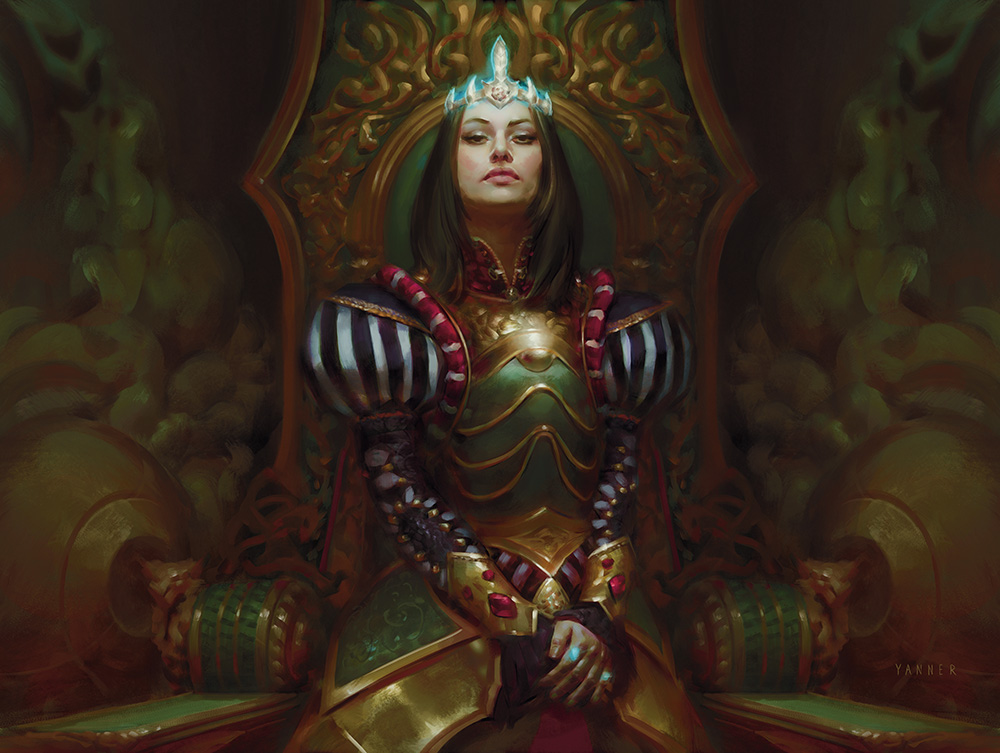