Machi Koro: Why You Can Set Fire To Your Monopoly Set - Nerdist

Machi Koro: Why You Can Set Fire To Your Monopoly Set

“You’ve just been elected Mayor. Congrats!” That’s the premise of Machi Koro, setting the stage for this SimCity-like tabletop game. What they didn’t tell you was that the vote was rigged: your city consists of nothing but a wheat field and a bakery, and you were the only person eligible to vote in the district. (The game doesn’t tell you that last part, but I can’t think of another reason anyone would want me as their mayor, so I may be embellishing on the premise.)

There are rival mayors (read: other nearby wheat farmers/bakers) and you want to show them up and build a world class city first. Let’s assume they were badmouthing the quality of your crops and bread. Motive aside, there seems to be a universal understanding that having a train station, a shopping mall, an amusement park, and a radio tower is the measure of a true city. Those amenities are easily built once your city is creating enough revenue through commerce, so your goal as newly-minted mayor is to build all four of those amenities before your rivals do. 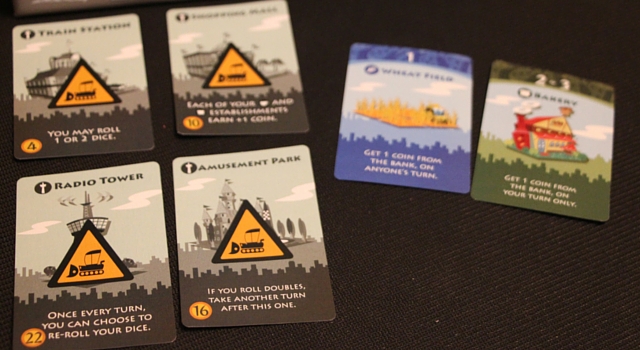 The game mechanics are simple. Roll a die, earn income, and purchase amenities for your city.

When you roll your die, it can trigger effects on cards whose value is shown at the top. Some cards are only triggered when the player themselves rolls the die (green cards). Blue cards, representing primary industries, earn income paid from the bank for all players, no matter who rolled the die. And red cards force the player who rolled the die to pay players who possess the red cards of that roll value before they earn income themselves.

The simple mechanics disguise a game that offers a number of strategies to success, giving the game a high replayability. There’s luck involved for sure, but so too is there strategy and skill in building city amenities that maximize on dice rolls and doubling up on benefits.

Machi Koro is the game I pull out when people say they haven’t played board games other than the standard Hasbro/Parker Bros. fare. It’s analogous to Monopoly in a lot of ways, though substantially more fun. The concept of rolling dice, earning money, and buying things isn’t intimidating and the art is accessible.

It doesn’t feel like a heavy infrastructure-building Euro game like Agricola or Power Grid, but it certainly is a great gateway to those games, unlike Monopoly.

The layers of strategy in this game are surprising, given how it only lasts 30 or so minutes. Businesses can combine effects, so how you build your city early in the game affects your choices later on. For example, buying up lots of ranches in the early game makes having a cheese factory more beneficial later in the game.  While diversifying amenities may help players earn more overall in the early game, committing to a single type of business pays off in the later game. You can even choose to buy high die-roll value cards early in the game, denying access to your opponents later in the game. There’s enough player interaction throughout the game to keep it from feeling like a solitare-style Eurogame slog.

The best games are premised around giving players many options but only a few opportunities to choose and that’s exactly what Machi Koro delivers, all while being fun. It offers serious gamers high fun efficiency (amount of fun over time) while also offering opportunities to change and adjust their strategies. At the same time, the game’s components are as simple as small coin punch outs in cardboard, cards, and dice. The components, while beautifully illustrated, are simple and basic, meaning you’re not spending $50-$80 on a game full of complicated (and expensive) components. As an analog to Monopoly, it competes similarly in price.

In addition to the core set, Machi Koro‘s expansions give the game new life; the Harbour expansion, for example, not only introduces new types of businesses but also a new way to play the game (limiting the types of properties available for purchase to 10). This changes the dynamic of the game completely, breathing new life and adding even more replayability to the core set.

It’s not a deep-dive, heavy weight game, but that’s not the hole it fills on my gaming shelf. What Machi Koro offers is a luck-based, income engine-building game that is quick playing enough to not be boring, strategic enough to feel like a substantive gaming experience for the 45 minutes it occupies, and accessible enough that the entire family can play it. In terms of family gaming, you can’t ask for any more. Well, other than maybe a hospital for your city.

Have you played Machi Koro? Tell us what you think of the game in the comments!