Mike Mignola’s vast Hellboy universe has been thrilling fans for 25 years, and as we get closer to the release of Neil Marshall’s rebooted cinematic vision we’re learning more about who will join Big Red on the big screen. One of the newest additions is Thomas Haden Church as a fan favorite member of the B.P.R.D. who fits in perfectly with the dark tone that the new film has been promising since its announcement: Lobster Johnson.

Originally introduced in Hellboy: Box Full of Evil #1 before spinning off into his own series, Lobster is a pulp fiction hero who the public thinks only exists in the pages of books and comics. He is in fact a “real” hero who fights crimes both human and supernatural. Like any classic noir hero, he usually wields a pair of pistols, though he occasionally utilizes other things that are close to hand. He first became active in the 1930s as a literal underground vigilante living and fighting in the sewers beneath New York. Though Lobster and his allies were a powerful force for good, they became the focus of a violent and vicious villain. Memnan Saa murdered many of them, leading Lobster to take on a contract with the U.S. government. 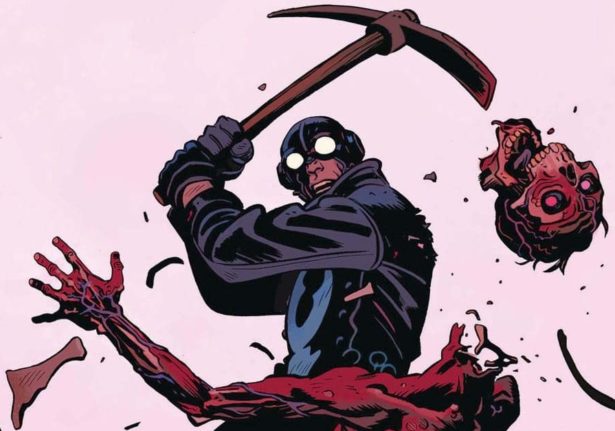 In 2018, we need as many as Nazi-punching heroes as possible, and in the later years of Lobster’s life he fought and killed fascists alongside the American government. Lobster was killed in the line of duty as he tried to stop a Nazi space launch in Austria, but as this is the world of Hellboy that was in no way the end of his story. After his death he became a famed pulp star, with fictionalized versions of his adventures published in magazines, and some even adapted to film. His legacy became so huge that some believe that the pulp stories were a coverup by the U.S. government, which didn’t want people to know that Lobster was real.

It wasn’t until after he died that Lobster became connected with the B.P.R.D.; Hellboy, who was a massive fan of the pulp character, discovered Lobster’s ghost in the ruins of the Austrian castle where he died. His ghost is alleged to be one of the most powerful in the mythical world of Hellboy. It’s likely that we’ll meet this version of Lobster in the new film, as the simplest way for Big Red to coincide with Lobster would be within the B.P.R.D. 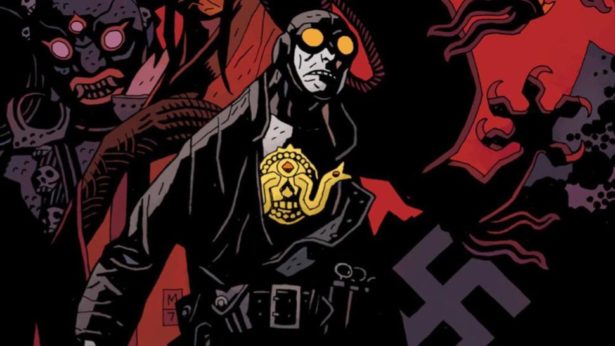 Johnson also has a connection to a couple of characters that fans of the original Hellboy films will be familiar with, as in the past he’s teamed up with both Liz Sherman and Johann Kraus. In fact, in certain stories the ghost of The Lobster has taken over Johann’s ectoplasmic form in order to defeat evil. As a spirit, Lobster can come across as arrogant or aloof but that’s only due to vast amount of existential understanding that he gained after his untimely death. A vital element of the B.P.R.D. Lobster Johnson will be an interesting addition to the upcoming film as he brings a dark noir edge, while also potentially opening up potential for humor with Harbour’s Hellboy acting as a fanboy to the super cool spirit.

Is Lobster Johnson one of your favorite characters? Surprised by how many similarities Lobster has to Steve Rogers? Just really love Hellboy? Let us know below!