The Oscars made history by nominating two women for best director in the same year for the very first time. Those women were Chloé Zhao for Nomadland and Emerald Fennell for Promising Young Woman. Zhao and Fennell join only five other women directors in the ceremony’s 93-year history. The first woman nominated in this category, Lina Wertmüller, also made history, and her films stirred up controversy.

Labeled a firebrand when she first emerged in the 1970s as a leading voice in global cinema, Lina Wertmüller has always been a singular artist with a voice all her own. A self-proclaimed socialist, she rejected the term “feminist”; in turn contemporary feminists rejected her films. Yet her films tackle complex issues with a deep understanding of intersectionality. In them you can find nuanced discussions of immigration; racism; materialism; class conflict; socialism; communism; anti-facism; and sex work. And she wraps them all in her penchant for Italian grotesque comedy techniques. 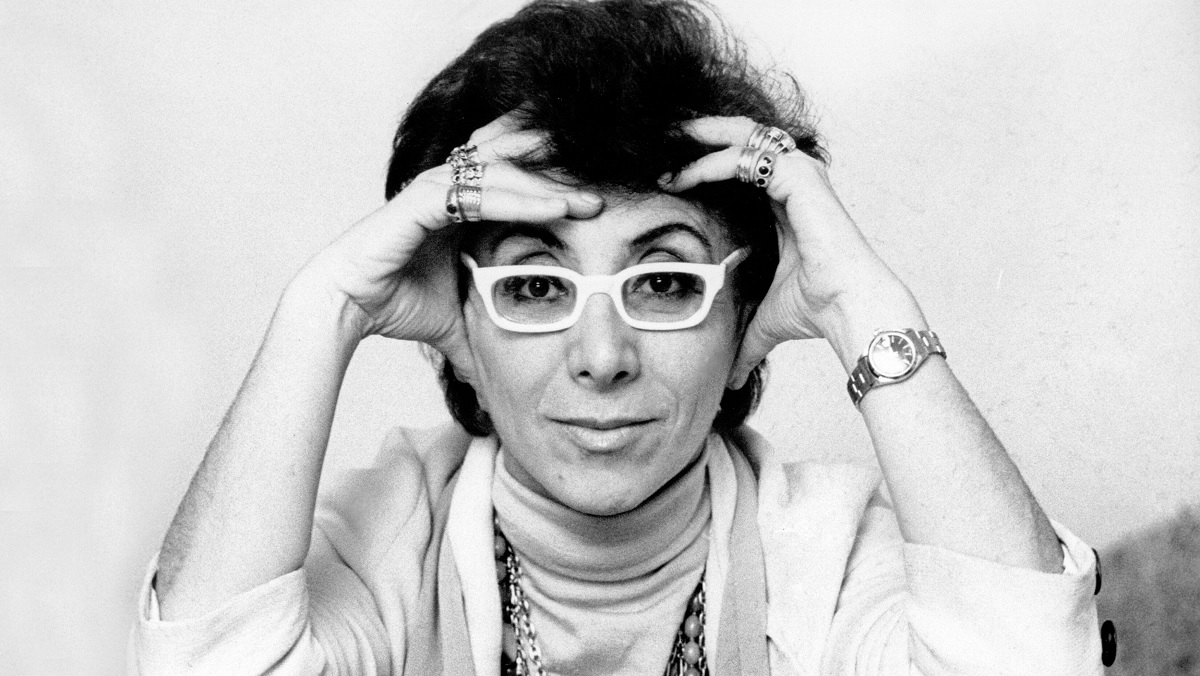 In a 2017 interview she told Criterion, “I love grotesque poetry, and I think my films have that style, which combines humor and drama, irony and cynicism, comedy and tragedy.” You see this love of the grotesque in the run of films for which she is most famous. The five films she made from 1972 to 1978—all but one of which star Giancarlo Giannini—made her an international superstar. Although they also put her at odds with feminists at the time.

1972’s The Seduction of Mimi follows the titular Mimi (Giannini) as he stands up to the mob who are trying to fix an election. Refusing to be intimidated into voting for their candidate, he leaves his wife and family in Sicily, looking for work in Turin. Once there he finds communism and falls in love with Fiorella (Mariangela Melato). While Mimi attempts to keep both women, he decides to get revenge on the man his wife is cuckolding him with by seducing his wife. Shot with a fisheye lens, this seduction scene shows Mimi’s horror at what a lived-in female body actually looks like. It’s both unforgiving and bold. Through Mimi, Wertmüller eviscerates Italian machismo. 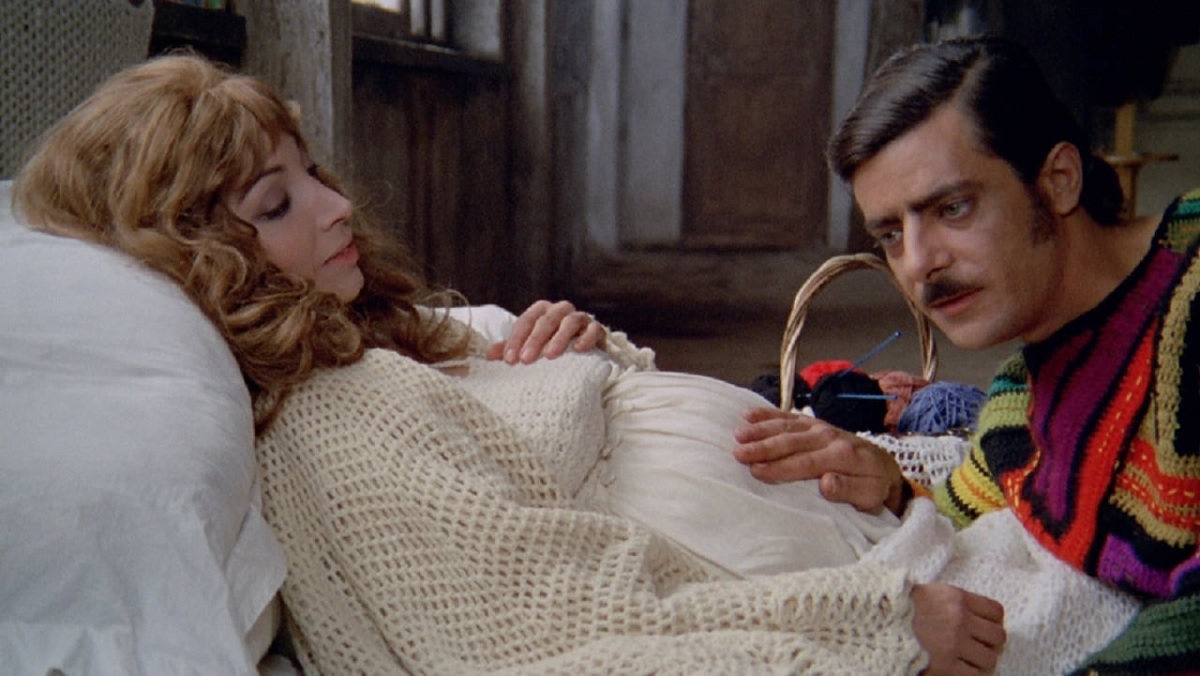 Her next film Love & Anarchy re-teamed Giannini and Melato, setting the action in the 1930s. Giannini plays Tunin, an anarchist who after becoming radicalized by the death of his friend is determined to kill Mussolini. He partners with Salomè (Melato), a prostitute who hides him in the brothel while helping him plot the assisination. Things go awry when Tunin falls in love with another prostitute named Tripolina (Lina Polito). As Tunin sleeps the night before the impending assasination, Tripolina and Salomè argue over waking him up. Salomè asks what would happen if all women stopped their men from going off to war. Tripolina replies, “it would be good.” Wertmüller shows us that neither romantic love nor unfocused anarchy end anything but another pointless death.

In 1974 Wertmüller released two films. In All Screwed Up she specifically looks at how the workforce in Italy began to shift in this era. A group of southern Italian immigrants move north to Milan seeking work in a factory. They form a communal apartment, as they struggle against the dehumanization of industrialization. Their traditional country values clash and eventually give way to impending consumerism. Like Love & Anarchy, Wertmüller dismantles harmful ideas about sex work, something she will returns to throughout her career. She also shines a harsh light on cold commercialism in the north that masquerades as progress. 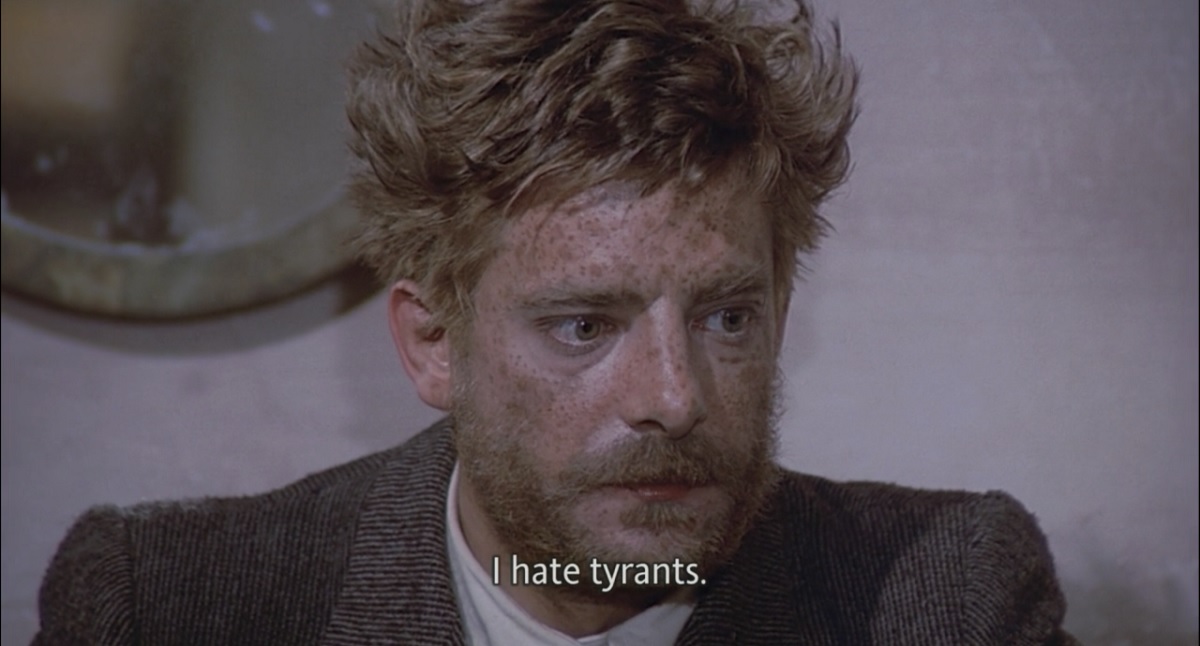 Next came perhaps her most controversial and misunderstood film: Swept Away. Feminists at the time attacked the film for its treatment of women. Wertmüller told Variety, “Some of them felt indignant and offended by Swept Away, but I told them that they simply had not understood the film.”

Giannini plays communist deckhand with sexist ideas about women Gennarino; Melato plays a racist, rich capitalist yacht owner named Raffaella. The film unfolds in three sequences. The yacht representing contemporary Italian society, with discussions and debates on themes such as divorce, abortion access, eugenics, socialized medicine, and poverty. The island, a pastoral land with no laws. And then back in Italy where society once against tests their natural selves.

While on the yacht, Raffaella holds all the power, which she uses to belittle and demean Gennarino. When the two end up stranded on a desert island, the power dynamic shifts and Giannini uses particularly violent methods to force Melato to both love and worship him.

In the end, Giannini comes to realize that “The rich always screw you.” It’s easy to see why the violent treatment of Raffaella would upset feminists. It’s still hard to watch. Wertmüller has said you could easily swap the characters, but by having the woman represent capitalism, she is lightyears ahead in critiquing white feminism and how upper class women benefit from continued income inequality. 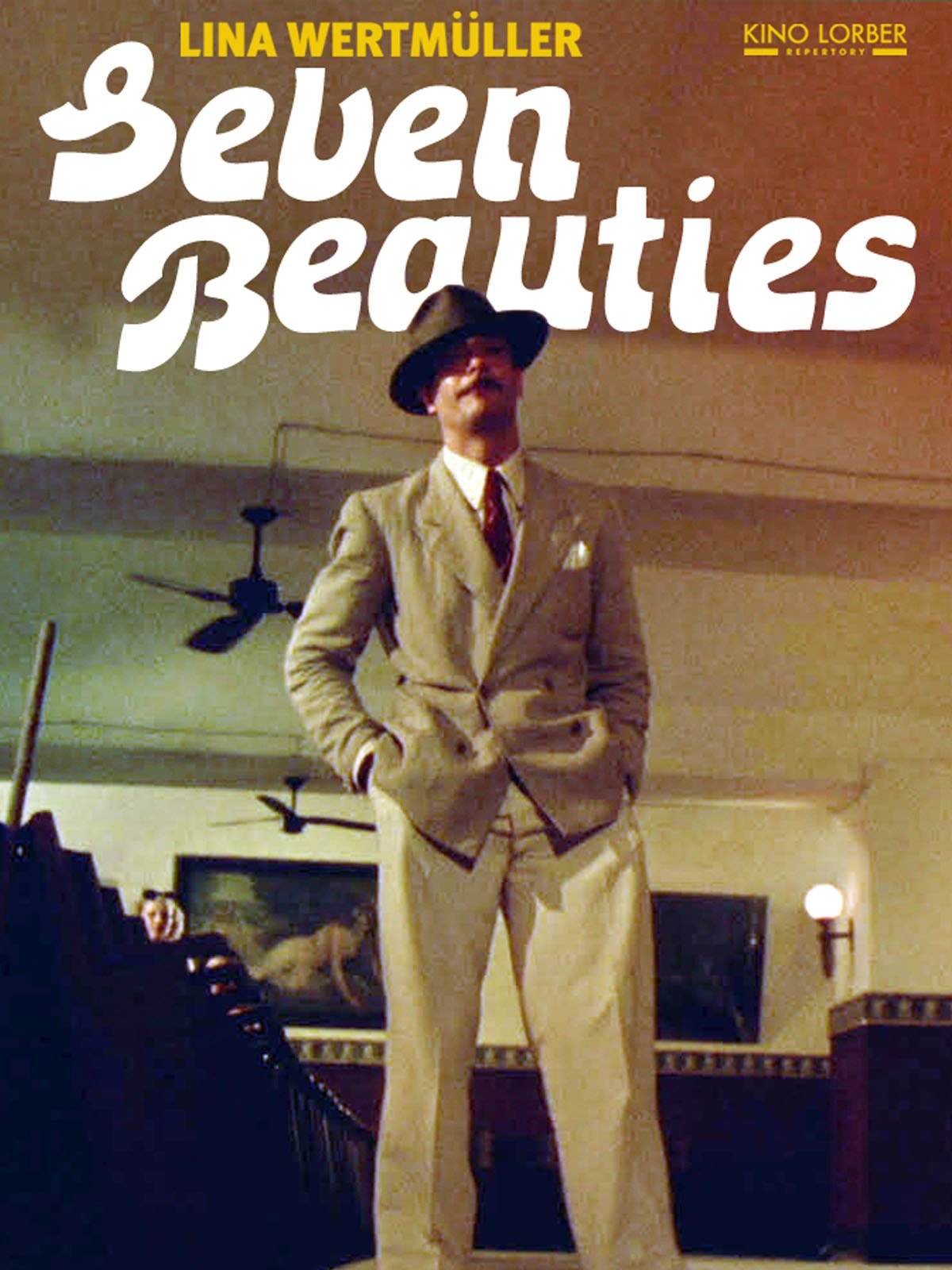 Which brings us to Wertmüller’s masterpiece: Seven Beauties, a culmination of all the ideas swirling in her earlier films. Again partnering with Giannini and told in a nonlinear fashion, we follow Pasqualino Settebellezze, a small-time hood in Naples. Angry that the man his sister loves has lured her into prostitution, Pasqualino threatens to kill him if he doesn’t convince her to give up the profession. This squabble escalates, with Pasqualino accidentally killing the man, then confessing as a matter of honor. This sets in motion the rest of the film; Pasqualino goes from a mental institution, to war, and eventually finds himself in a concentration camp.

Throughout her collaborations with Giannini, Wertmüller uses his wide, expressive eyes to show us the world through them, and in Seven Beauties she uses them as an unflinching gaze at the horrors of war. As Pasqualino enters the concentration camp we take it all in through reactions in his eyes. She uses quick cuts, never lingering. It’s horrific, but never exploitative. 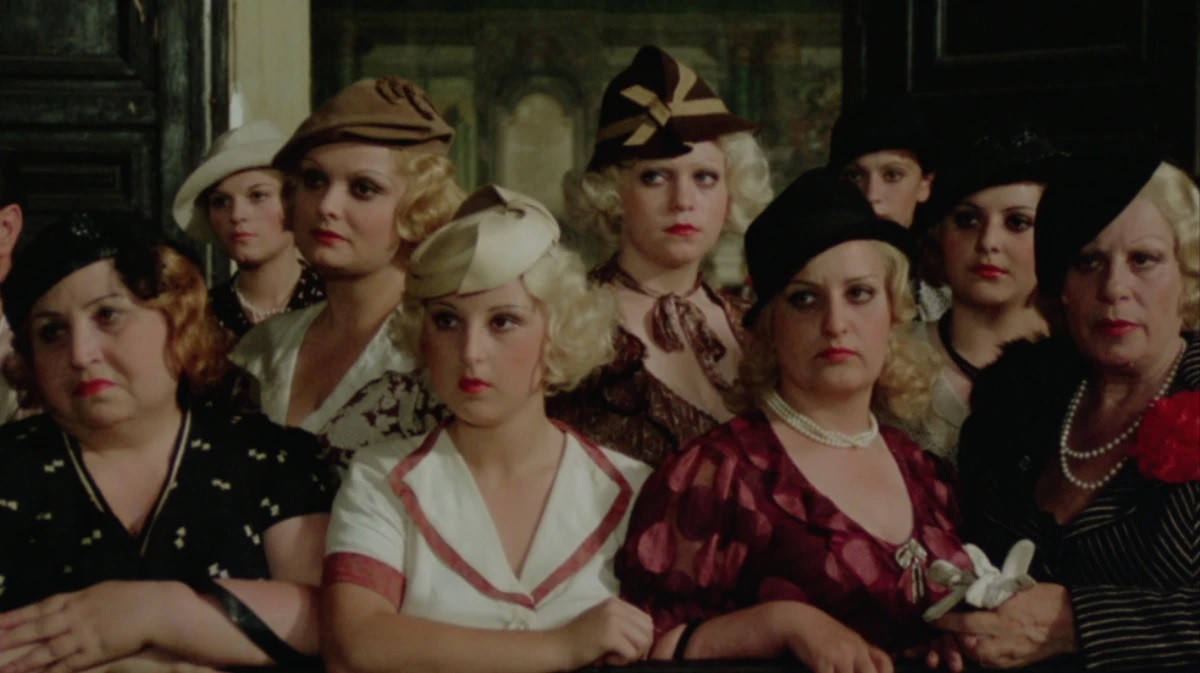 In her earlier films Wertmüller crafted a unique visual style, using zooms for comic effect and placing her actors in extreme close-ups during conversations. She uses all of these techniques in Seven Beauties, but subverts them. Blocked exactly like one of her earlier romances, the film’s most depraved scene sees a desperate Pasqualino seducing a Nazi guard for food and the possibility of making it out alive. It’s unsettling to say the least.

Seven Beauties, ultimately is a film about resilience. Pasqualino does what he needs to do to survive, and so does his family. His sisters (the titular seven beauties), his mother, and even the woman he loves all turned to prostitution. When he returns to them, he asks if they were able to earn enough to survive. When they say yes, he says “good.” 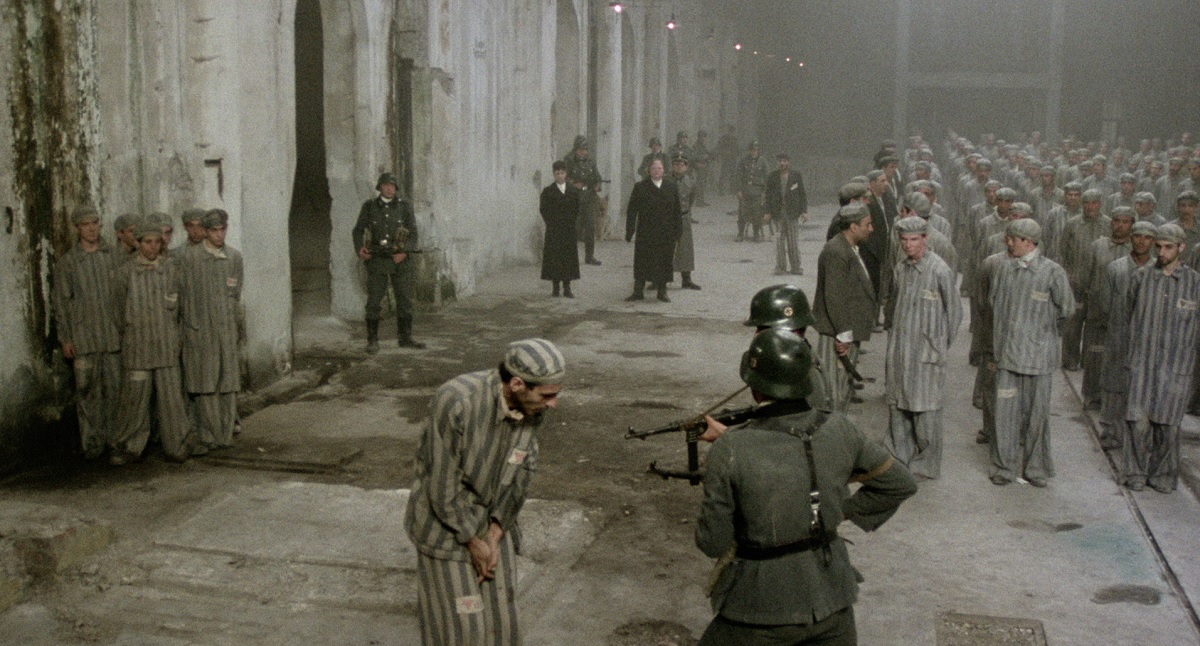 In her debut film, 1963’s I basilischi (The Lizards), a film in which she critiques middle-class indifference to the fight for fair wages, a character says that “sometimes honor is a luxury.” In Seven Beauties, Pasqualino has learned that honor is a luxury many cannot afford as they fight to stay alive. Wertmüller wisely leaves it open to interpretation if in the end all the degradation was indeed worth it, or if those who chose honor had the right idea. 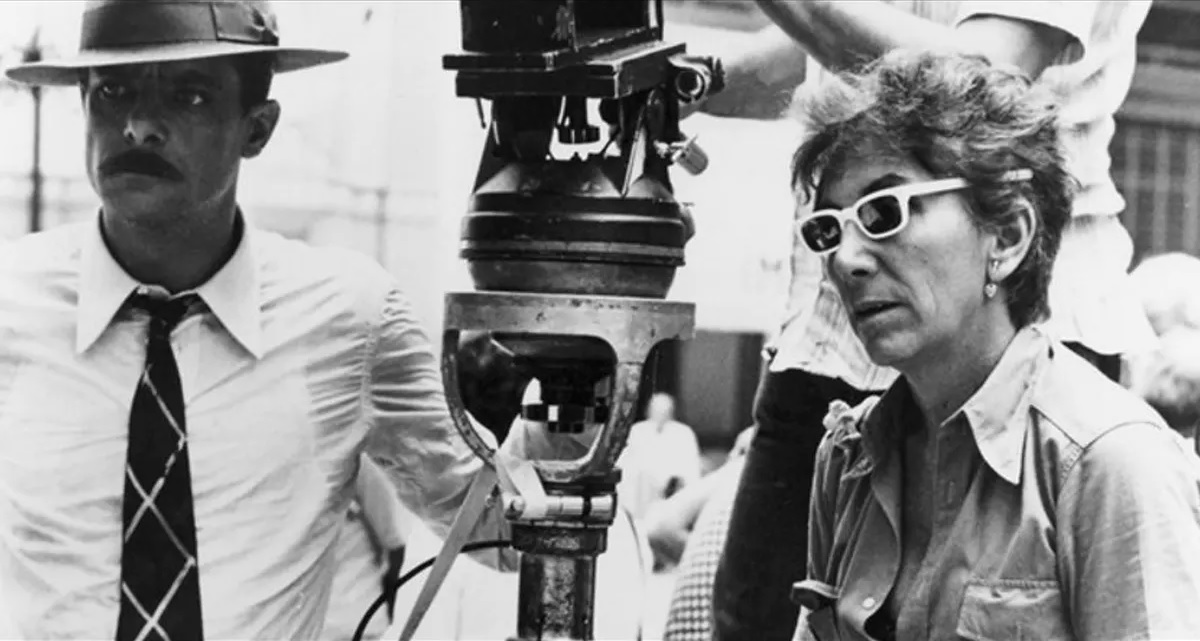 In 2019, the Academy bestowed Wertmüller with a Academy Honorary Award – only the second woman director to ever receive the honor. Still uncomfortable being labeled a female director, Wertmüller knows the legacy she carries for women in the industry, telling Vice “I just hope that new generations will appreciate my movies and that my movies will encourage women from all over the world to believe in themselves and to follow their dreams.”

Wertmüller’s singular voice and strong vision infuse her films with a political potency that is as relevant today as they ever were.