This 'Lickable Screen' Can Replicate Taste and Flavors of Food - Nerdist

This ‘Lickable Screen’ Can Replicate Taste and Flavors of Food

While you shouldn’t lick your mobile devices for obvious reasons, this particular gadget relies on you doing just that. Thanks to Homei Miyashita, a researcher from Meiji University in Japan, there’s a new gadget that only works when you lick it. Called the Norimaki Synthesizer, this device can artificially recreate any flavor by triggering one of the five tastes every person has on their tongue. Wild, right?

This “handheld lickable screen” works by using different gels that represent one of the five tastes: salt, acid, bitter, sweet, and a savory taste called umami. According to Digital Trends, “When a person licks the device, they ordinarily taste all five flavors. However, when an electric current is applied to the device, the researchers demonstrated that they could weaken or strengthen certain taste combinations to create different pairings.”

“I believe that this invention has the same impact as the invention of color television,” Miyashita told Digital Trends. He continued, “Just as television mixes the three primary colors of light to create various colors, this system mixes the basic five tastes to create a variety of tastes.”

It all comes down to science. Gizmodo explains that by tricking your eyes to see certain images on the screen and pairing that with the color-coded gels, you “taste” what you’re looking at. Agar formed in the shape of long tubes make up the gels. They use glycine for a sweet taste, citric acid for acidic, sodium chloride for salty, magnesium chloride for bitter, and glutamic sodium for savory umami. This novel taste display uses ion electrophoresis. 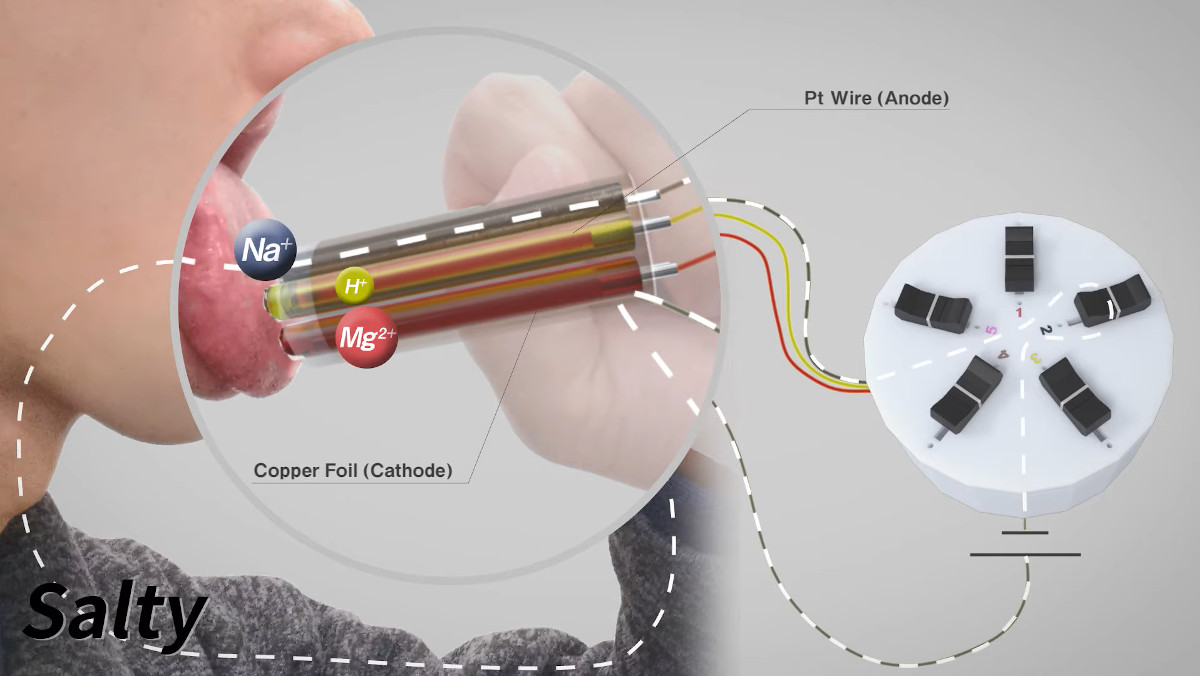 Miyashita explains, “When applied to the tongue with no voltage, the user can taste all five tastes. However, when an electric potential is applied, the cations in the gel move to the cathode side and away from the tongue, so that the flavor is tasted weakly. In this way, we have developed a taste display that reproduces an arbitrary taste by individually suppressing the sensation of each of the five basic tastes (like subtractive synthesis.) Our study differs from previous work in that it uses an electric current for electrophoresis rather than electrically stimulating the tongue, and it does not involve ingestion of a solution to deliver the taste.”

Electrophoresis is a subtractive process that selectively removes tastes to create a specific flavor profile. Now, while this is just a prototype, the possibility for a smaller, more portable version doesn’t seem too far away. Maybe users could pair it with a  television or a smart device. One could “taste” a full cheeseburger, fries, and milkshake meal without consuming it. Wave of the future, or weird tech fad? We’ll have to wait and see.