Lessons for Board Game Designers: How To Survive Publisher Speed Dating At Conventions - Nerdist

Lessons for Board Game Designers: How To Survive Publisher Speed Dating At Conventions

This year’s Gen Con was a huge deal for my wife and I. Not only was it the 50th anniversary of the convention, it was also our first time attending, the first time in Indianapolis let alone Indiana, the first time using an AirBnB, and of course the first time pitching our board game to real life publishers. Needless to say, it was surreal, and one of the greatest experiences of my life.

I could go on and on about the entire experience, but you are here because you want to know what happened at the Designer/Publisher Speed dating event, hosted by the Indie Game Alliance, and what you could learn from my experience. 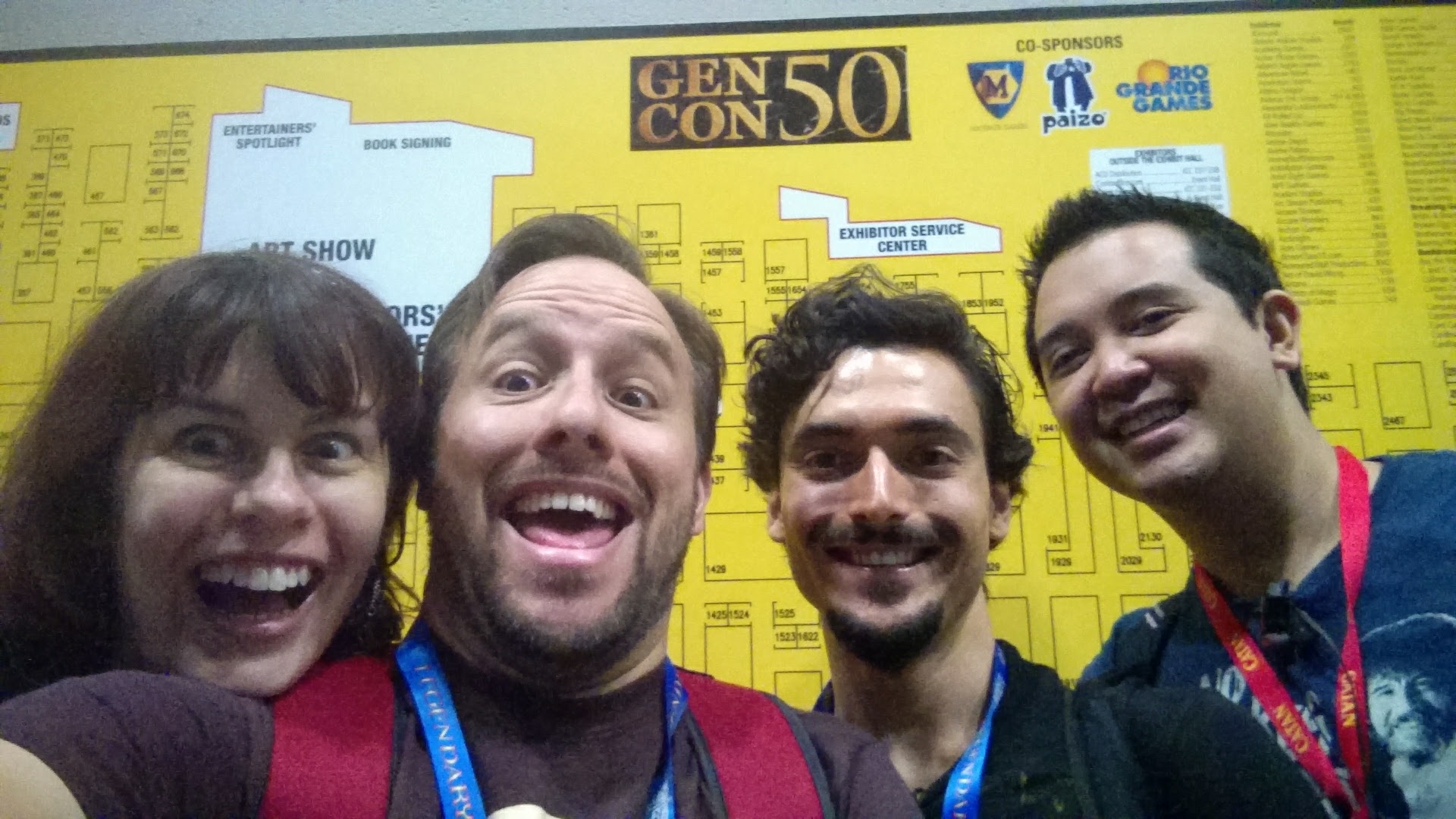 For starters, the structure of the event had you pitching to a new publisher every six minutes, for two hours. That is essentially 20 publishers, so expect to be talking a lot. While that is factual, my initial expectations were wildly inaccurate. I had imagined a highly exclusive event room with individual tables for each of the designers, and stoic publishers dressed to the nines in highly formal uniforms who couldn’t be bothers with anything less than an AAA game ready to ship — I could not have been further from the truth.

Instead of an exclusive room, we had a dedicated corner of the main free gaming hall. This meant a lot more ambient noise than I had planned for, making speaking and listening to the publishers a little more challenging. I found myself multiple times leaning in and even asking the publishers to repeat themselves so I did not miss anything they might have said. Furthermore, with a two-hour duration, my voice quickly grew tired which leads me to my first tip:

1) Be sure to bring something to drink, so to keep you hydrated. Nothing with too much sweetener in it as it can increase unwanted mucus unless it is honey which helps soothe the throat. Additionally, do not drink it too to quickly as having to go to the restroom can cost you the opportunity to speak with three or more prospective publisher. You cannot do much about the noise pollution, so speak up and do not be afraid to ask a publisher to repeat themselves or clarify what they have said. 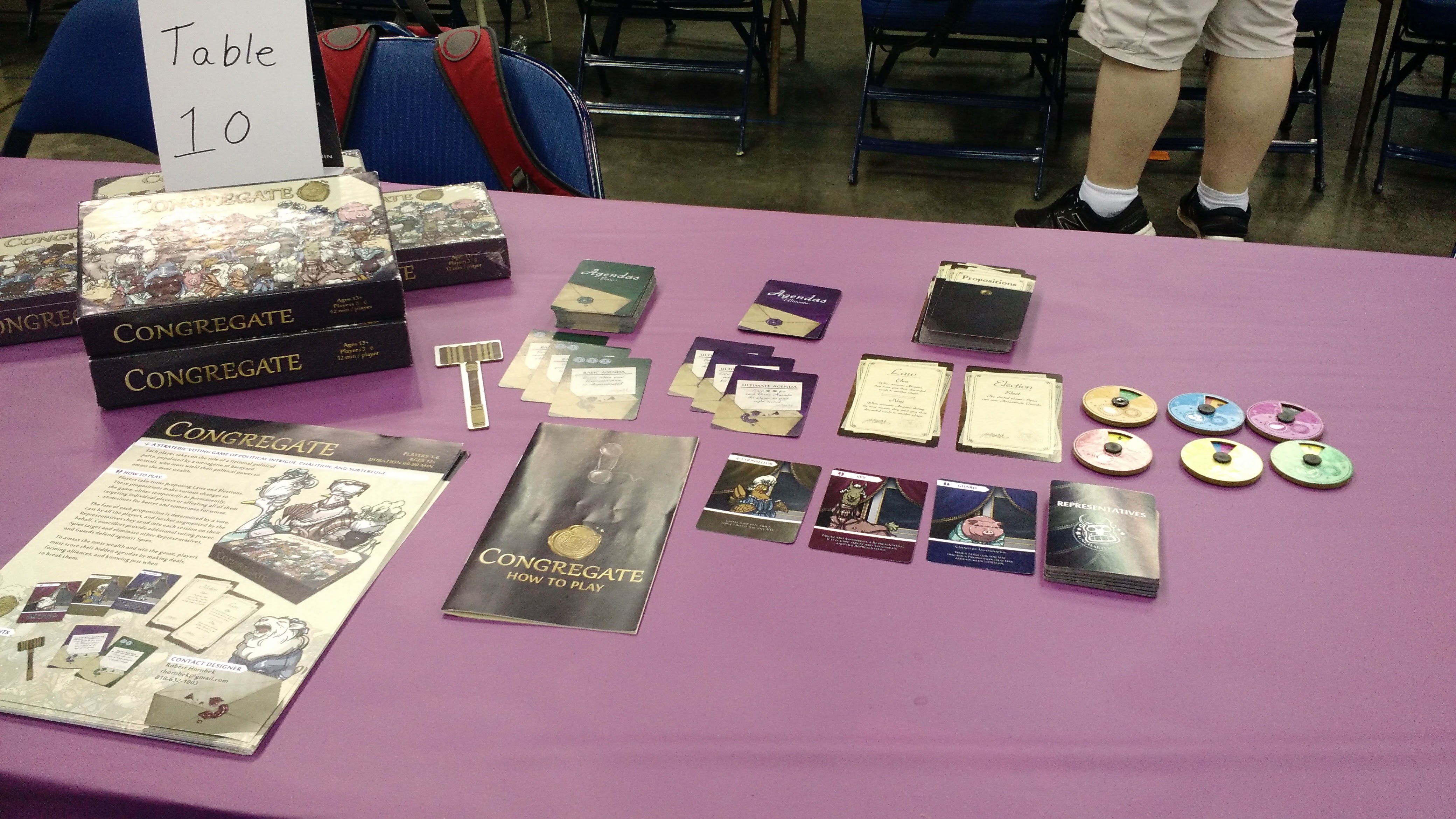 While there was plenty of space for all of the designers to display their game, the setup was essentially long rows of tables with designers on one side and the publishers on the other. This made it easy for the publishers to just move down the line to the next game, but it could have an impact on how you decide to display your game. Which brings me to the next tip:

2) Be sure to lay out all the components of your game in such a way that it clearly displays them to the publisher, but in such as way that it goes with the flow of your pitch. I organized my components from left to right; starting with the box I gave an overview of the theme of the game, followed by the objective where I displayed the agenda cards, then the character cards, etc. Due to the limited time of each pitch — six minutes — I chose to omit an explanation of some of the components but I still prominently displayed them to encourage the publisher to ask the burning question — “what are these cool looking things?”

No matter how prepared I tried to be, nothing could prepare me to stand up to the all powerful publishers. Towering over me in their expensive suits, shaking their heads when they realized that the copy of my game was printed a little too dark. I was super nervous. But then I spoke with my first publisher, lean guy with a dark red beard wearing a backpack a t-shirt and jeans. “Hey, nice to meet you. Your game looks really cool!”

3) Publishers are just people like you and me, and most of them are at the convention to have a good time, meet people and do what we all love — play board games. Almost every single publisher I met was kind, humble, thankful, and super eager to learn all about my game, whether or not it was something that would fit their catalog. So don’t be worried about speaking to them, they are lovely beautiful people just like yourself and whether they like your game or not, it’s just business. 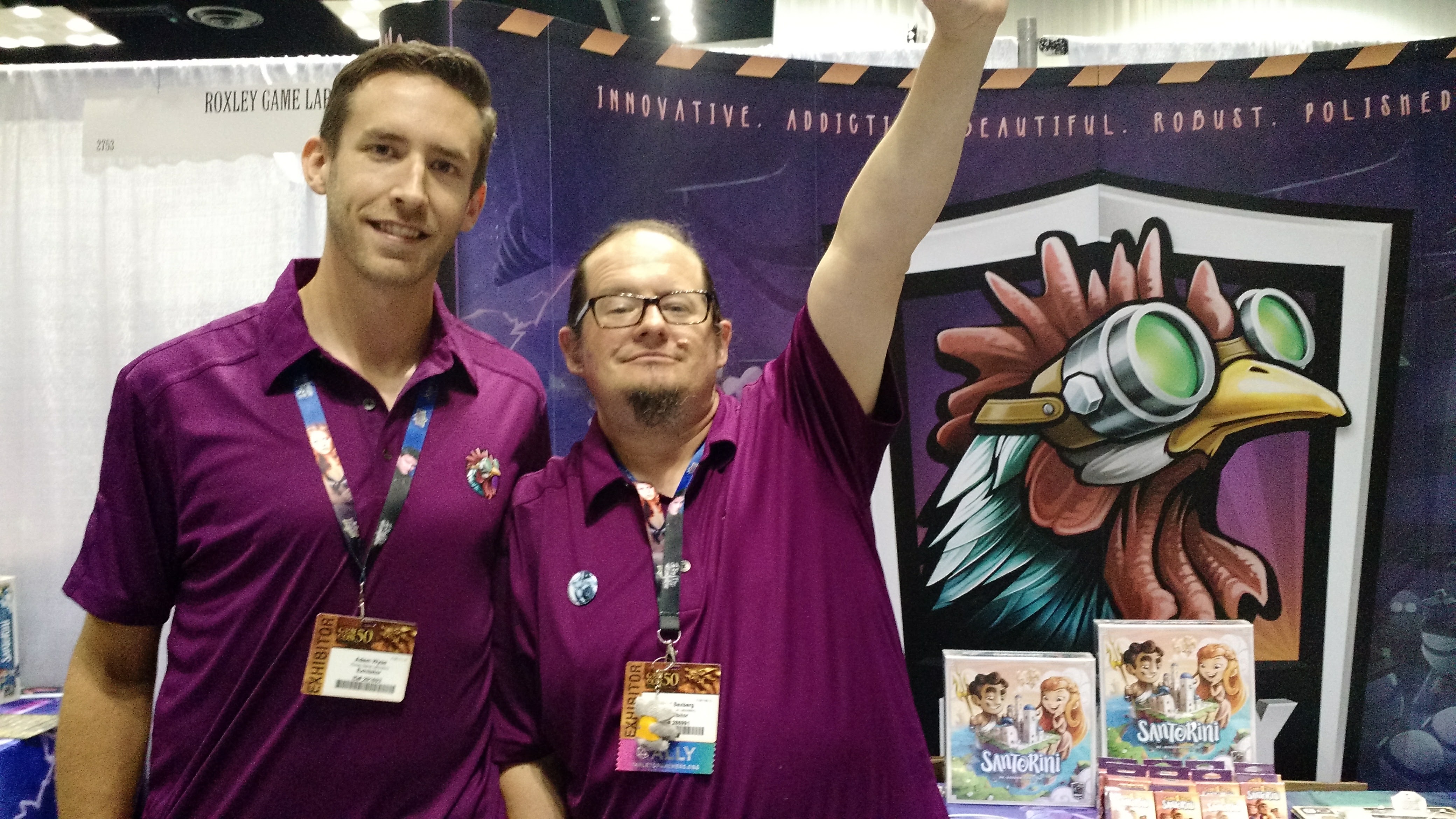 There are dozens of lists out there telling you what to bring to a publisher speed dating event like this, and I read most of them before I went on this adventure. Common suggestions include having upwards of 30 sell sheets, which is essentially single page advertisements built to sell your game to publishers, and having 10 or more extra copies of your game to give to publishers if they want it for further review.

4) I found 30 sell sheets to be an appropriate amount. I still have some left over, but that is better than not having one when you need it. As for the copies of your game, it really depends on the overall price. The prototype of my game costs close to $60, so 10 copies would have cost me a lot. Less expensive games could get away with more copies, but I purchased five and it worked out perfectly.

The speed dating, while exhausting was a wealth of information as a budding professional board game designer. Probably my biggest mistake was — Tip Spoiler Alert — not recording every golden word that came out of the publishers’ mouths.

5) I would strongly suggest you have someone sit and take notes for you during the speed dating if you are able. You could choose to use a voice or even video recorder, but you would more likely have to ask permission to do so. In any case, you will likely not have the time or wherewithal to take notes yourself, so have someone do it for you. Be sure they take down the name of each company, the names of the representatives that you speak with, their contact information if provided, and anything else noteworthy.

Ultimately, there is nothing to be afraid of. People are fun and respectful, and your game does not need to be perfect, you just need to be clear and ready to answer any question they may ask. Go in with a plan and the tools to execute it, and you will do just fine. Be sure to thank each of the publishers for their time during the event and in a follow-up email to keep you on their radar.

As for my game. It did not appeal to most of the publishers, for one reason or another, but I am still in the running with a few of them and I am organizing a time to give personal demos to each. Even if it doesn’t work out, I learned a lot and had a ton of fun doing it!

Got questions about pitching to publishers? Leave them in the comments!