It may still just be the beginning of 2017 but there are a lot things to look forward to this summer. Whether it’s warm weather, concerts, or big blockbuster movies, 2017 has a lot of awesome things on the horizon. Tabletop is not much different, with Gen Con 2017 a center point for huge releases from companies big and small. The 50th anniversary of the convention takes place from August 17th to the 20th and one of the biggest companies at the show, Fantasy Flight Games, has already started to generate buzz with the announcement that the latest edition of Legend of the Five Rings will be dropping in Indianapolis. We’ve got a few reasons why standing in line for it at the show will be worth the wait.

Legend of the Five Rings, or L5R as its fans call it, is set in a land called Rokugan. The quickest way to describe it? A Game of Thrones with samurai. The setting mashes up and remixes elements of Asian fantasy, chanbara films, wuxia stories, and even some Western mythology for flavor. The samurai serve one of several clans of the Emerald Empire, jockeying for the Emperor’s favor through battle, courtly intrigue, and duels. The collectible card game focuses on each player as a daimyo trying to become the clear choice as the next heir to the throne. The game has also seen an RPG, board games and Live-Action rules set in the same setting. 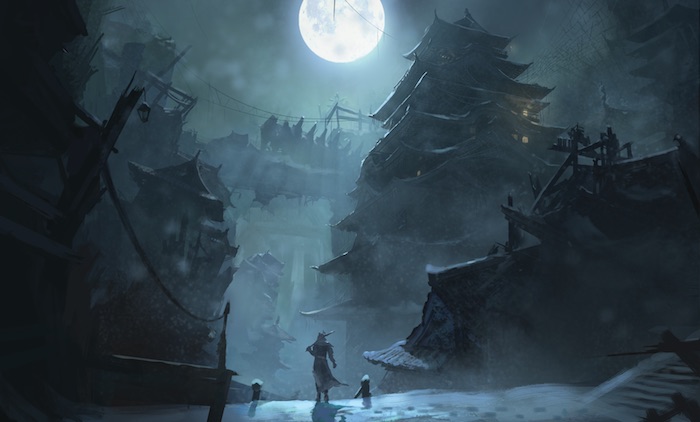 When the game was originally released in 1995, one of its most unique draws was the storytelling aspect of the game. The card game told the story of the impending Second Day of Thunder, where the clans banded together to protect the Emerald Empire from the oni–demons and other creatures of the invading army of the Shadowlands. The tales of the tournament itself have achieved something of a legendary status, as the story was edited on the fly. In the end, the samurai won, but at great cost. Players were hooked into a game that had an engaging story and gave the players of the game some control over the story.

Other fans fell in love with the RPG version of the game. The first edition, set before the events of the card game, fleshed out the world with deep sourcebooks on the clans and creating a rich, carefully detailed culture that rivals anything out of a fantasy novel series. Each edition of the RPG also expanded and detailed the events that happened in the card game. The most recent edition of the RPG took a novel timeline neutral stance. This edition allowed old fans to choose the era during which their game was set and new fans to get a big picture view of all the epic changes to Rokugan during the 20 years Legend of the Five Rings has been around.

The dedication to story and worldbuilding are why Legend of the Five Rings fans are known as some of the most loyal and hardcore fans in gaming. They’ve organized charity tournaments with storyline implications, cosplayed as their favorite characters at tournaments, and even gotten tattoos of their clan symbols, or mons, on their body. Fans may fade from the hardcore tournament scene but mention the game in a group of card players and someone will grin and tell a story about their Lion deck standing tall or the time they outfoxed a Scorpion player.

Details about Fantasy Flight’s vision for the line are still scarce. The first release, due at Gen Con 2017, will be in their Living Card Game format like Netrunner or Arkham Horror:The Card Game.  LCG expansions offer multiple copies of each card in the set, so a player only needs one box for a full playset. Fans will likely be encouraged to buy multiple core sets for a full playset of cards but gone are the days of buying a booster box hoping to get a full set of an expansion. Which factions will return and how interactive the new storyline will be are still to be revealed. Other games are sure to follow and Rokugan looks to flourish once again in its new home.

Whether an old bushi returning with ancestral steel, a shugenja with a scroll sack full of spells, a courtier whose words are as sharp as knives, or a new samurai that’s never fought for the honor of the Emperor, this August looks to be an amazing time for fans of Legend of the Five Rings.

Who is your favorite L5R personality? Let us know in the comments!