Learning Through Play: Board Games Lessons in U.S. History - Nerdist

With the Fourth of July right around the corner, now’s the perfect time to hone your knowledge of United States history. The beginnings of the country were filled with strife and turmoil, first through the revolution to become independent of England, then in the war within the union, as the vile institution of slavery threatened to divide the nation.

While the nuances of history are best learned through textbooks and other more encompassing resources, you can gain a broad perspective of U.S. history and learn something through tabletop games. Two titles from Academy Games, 1775: Rebellion and Freedom: The Underground Railroad, offer gamers a way to experience seminal moments in U.S. history. Both games put players right in the middle of the action, allowing them to make decisions based on the actual events of history.

In 1775: Rebellion, players battle as the English and the colonists during the start of the American Revolution, hoping to gain control of the colonies. In Freedom: The Underground Railroad, players work cooperatively as abolitionists to end American slavery. While historical knowledge of each game’s subject isn’t needed to play, the experience is enhanced by having some familiarity of the subjects. Here’s a look at how both games provide engaging, informative, and sometimes challenging history lessons on the tabletop. 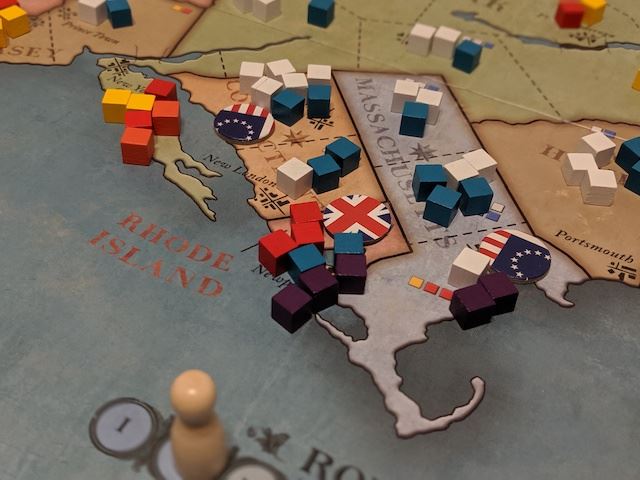 Whether you’re the British side, trying to quell the insurrection in that land far across the pond, or the colonists, fighting for your independence, 1775: Rebellion offers a streamlined war game that’s perfect for those who’ve never played war game before. You and your opponent are trying to gain control of the most colonies before a truce is declared; the player with the most colonies wins.

Each turn you’ll play cards from your hand to move and fortify your troops in this area control game. You’re always in danger of your troops deserting you, but thankfully you’ll have reinforcements from other countries available (French for the Americans, Hessians for the British). There’s also the Native American forces who can be allied with either side. As your forces grow, you’ll gain more dice for combat; which is a straightforward resolution with your opponent.

It’s this streamlined game play that will appeal to new war gamers, coupled with features like event cards based on the actual events and people of the time. For example, playing as the American side you’ll run across historical figures like George Washington and the Sons of Liberty as you attempt to establish a nation. Through smart card play and movement you’ll be able to control the most colonies when a truce is declared. Doing so garners you the victory as you declare your independence … or come to terms with living under British rule. 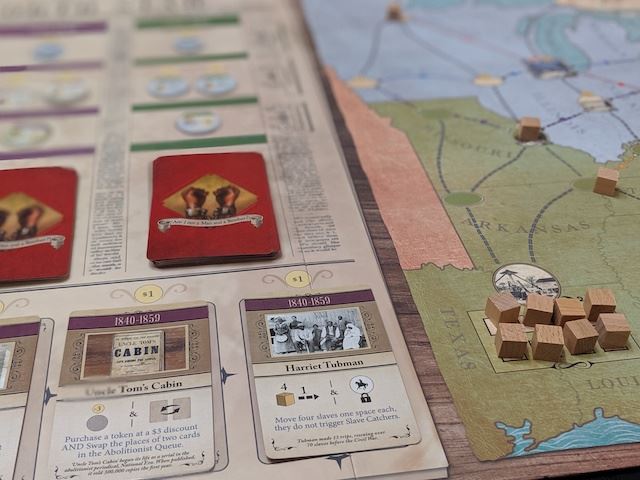 While the game’s cooperative mechanisms will be familiar to veteran gamers, it’s the subject matter that stays with you long after you’ve finished. I’ve never experienced anything like Freedom: The Underground Railroad. It’s a fine game mechanically; you’re trying to move the slaves to freedom while manipulating the slave catchers to more favorable locations on the map. You’re also hoping to garner sympathy for your cause to raise funds to help more slaves survive.

But they’re not all going to make it. Slaves will be captured, put back on the market, and die. Like the ugly truth of history, the game pulls no punches; no other game causes this type of stress. The slaves are represented by plain cubes, but losing one feels more brutal than having an entire fleet of ships blown to smithereens in Twilight Imperium.

It’s this historical immersion that brings everything together in Freedom: The Underground Railroad. Because you know the history, you know how much is at stake. 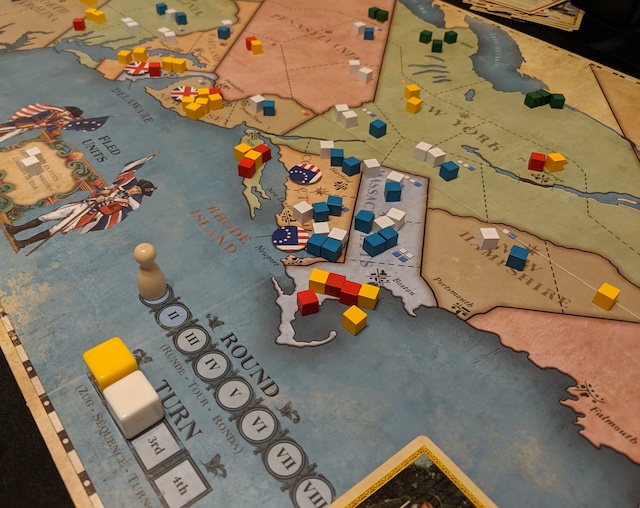 Both 1775: Rebellion and Freedom: The Underground Railroad provide outstanding game play, solid components, and an informative history lesson. While gamers may try to focus strictly on the mechanisms in each, you’ll be hard pressed to ignore the history in your hands, whether it’s a card describing an important event, or the cubes representing the lives lost during a low point in American history.

The games have accompanying books (Teaching the American Revolution Through Play and Teaching the Underground Railroad Through Play) that offer curricula based on these two historical eras. Students learn through game play while reading more in-depth about the events portrayed on the tabletop. Winning or losing a game truly doesn’t matter here. It’s the act of playing that can help inform the students of today as they become the leaders of tomorrow.

What are your favorite historical games? Tell us in the comments!

Ruel Gaviola loves board games, books, food, travel, Star Wars, and date nights with his wife. He writes about games for iSlaytheDragon, podcasts about games for The Five By, and his name rhymes with Superman’s Kryptonian name. Follow him on Twitter and read his blog here.

Build to Impress the King in ARCHITECTS OF THE WEST KINGDOM