Lead Your Troops to Conquer Feudal Japan in GUNKIMONO - Nerdist

Lead Your Troops to Conquer Feudal Japan in GUNKIMONO

In the 3-D tile-laying game Gunkimono, you’ll take on the role of a daimyo and lead your warriors into a battle to conquer feudal Japan. Wield your troops of infantry, samurai, cavalry, spearmen, and archers in your quest to expand your armies throughout the war-torn country.

Will you gain enough honor to build your strongholds throughout the land? Will you earn war banners to gain the points necessary to be declared the winner? Or will your opponents’ ever-expanding armies be too much for you to overcome?

In Gunkimono (Japanese for war tales) each player controls their forces in the form of army tiles featuring one or two types of troops (infantry, samurai, cavalry, spearmen, or archers), with each corresponding to a specific color.

On your turn, you’ll enter the fray by placing an army tile onto the board. However, unlike other tile-placing games, you’re not limited to the board itself. You’ll place tiles on top of other tiles in a constantly changing array of troops.

All players have three tiles in their hand to choose from. Tile placement rules are simple: you cannot place a troop/color on top of the same troop/color and tiles may not hang off the side of previously placed tiles. Each player receives single army tiles that may be used to support other tiles. 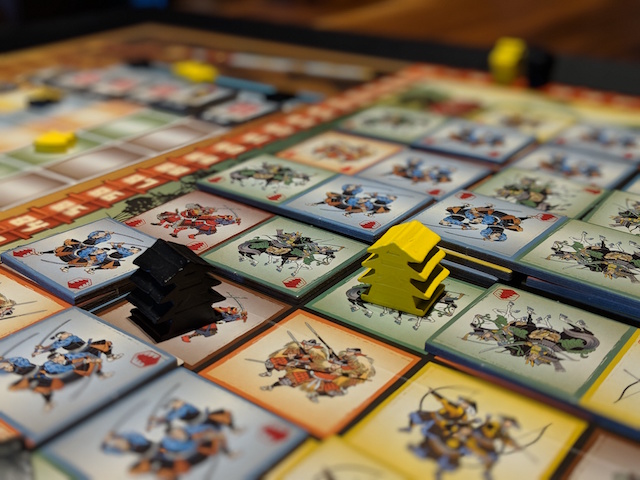 The beauty of Gunkimono lies in these decisions. As the game progresses and troops expand, you’ll want to break up those larger, point-yielding troops of your opponents. Placing a tile of a different troop can hinder your enemy’s plan of increasing their influence throughout the land. When you reach certain spots on the honor track you’ll unlock your strongholds, which you’ll place on any troop on the board. All adjacent matching troops to your stronghold are now scored as victory points at the end of your turn. Plan your strongholds carefully and you’ll soon be earning extra points, but beware: your opponents will now look to divide and conquer your stronghold territory.

After all tiles have been placed, players add any war banners they’ve earned to their victory points and the most points wins.

Check out Becca’s How to Play video to get a handle of the setup and gameplay:


Gunkimono features elegant gameplay for two to five players. The simple turn structure of playing a tile and scoring honor and/or victory points belies the amount of tactical and strategic choices you’ll have each turn.

It’s a game easy enough for new gamers to grasp, but with enough depth that seasoned gamers will appreciate. As the game continues into the later rounds, you’re faced with increasingly tense decisions. You’re constantly reassessing the board since it changes on every turn, hoping to balance your desire to expand your forces with your need to stop your enemies from doing the same.

After being previously published as the farming game Heartland, Renegade Game Studios has implemented a classic Japanese war theme while retaining the previous incarnation’s smooth game play. With a play time from 30-60 minutes depending on player count, you’ll revisit Gunkimono for repeated plays, often during the same game night.

If you want to see the game in action, check out our episode of Game the Game where Becca and guests battle it out: