Laura Dern is the Secret to JURASSIC PARK's Longevity - Nerdist

Laura Dern is the Secret to JURASSIC PARK’s Longevity

It’s been 25 years since the imposing wooden gates of Jurassic Park opened for the very first time, and the classic family film is still one of Spielberg’s greatest achievements. The groundbreaking special effects that brought the dinosaurs to life–created by a small team at Industrial Light & Magic–changed the way Hollywood worked forever, effectively freezing stop motion animation in its tracks. But as much as SFX changed the film landscape, Jurassic Park has outlasted so many of its peers and still holds its ground as one of the greatest blockbuster movies of all time for another reason: Laura Dern. In celebrating Jurassic Park it’s easy to get lost in the fantastic visual effects, the record breaking takings, and the fact it was made by one of the most lauded directors of all time. But in the midst of all the set pieces, creature work, and dynamic action is an incredible collection of performances from a cast who elevated what could have been a regular blockbuster to character-driven, cinematic magic. And at the film’s heart is Laura Dern’s subtly radical portrayal of paleobotanist Ellie Sattler. 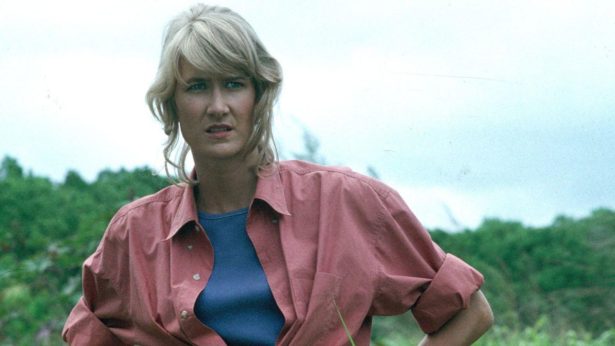 From the moment she walks on screen, Laura Dern’s Ellie galvanizes the film with charm and passion. When she storms into the trailer screaming blue murder at the millionaire who’s funding their dinosaur dig, you never once question that Ellie will do what it takes to protect her work, and yet she is never portrayed as barren or nagging in the way that so many “business women” archetypes usually are. A great juxtaposition and example of the more common version of this trope is Colin Trevorrow’s treatment of Claire Dearing and her assistant in 2015’s Jurassic World. Both the women are career-driven and are apparently uninterested in the idea of motherhood, even if it’s the temporary kind. Both are punished, with Dearing’s park terrorized and demolished by dinosaurs, and her assistant Zoe dies in what’s unquestionably the most brutal and prolonged death in the franchise’s history.

Dern’s characterization eschews those pitfalls: Ellie’s arc always focused on her knowledge base as a source of power, safety, and ultimately heroism. Whilst Sam Neill’s grizzled Alan Grant has an arc revolving around the film’s two children, Ellie is always pragmatically focused on saving those around her, whether it’s the Triceratops poisoned by the prehistoric plant life or Samuel L. Jackson’s Ray Arnold whilst he attempts to turn the electricity in the park back on. Ellie is a worthy hero often overlooked when we talk about classic action hero roles, but it’s worth noting that fully realized female protagonists did exist in Hollywood movies in 1993 and prior. Decades earlier Pam Greer had redefined action heroes in a slew of incredible Blaxploitation movies, most notably Coffy and Foxy Brown. A decade and a half before Jurassic Park, the world had been blessed with Sigourney Weaver’s vital and genre shaking performance as Ellen Ripley in Alien. In the movement that followed we got heroes like Linda Hamilton’s Sarah Connor, as well as fantastic co-leads like Rachel Ticotin as Melina in Total Recall and Rae Dawn Chong in Commando. The rarity of Ellie Sattler, though, was her role in a family movie neither as a mother or even a caregiver, but simply as a capable and brilliant woman who ended up saving the day and likely the world.

Dern’s turn is also fantastically physical–revisit the scene where she sprints away from the group of raptors through the jungle of Isla Nublar. Yet, she managed to escape the sexualization of actresses we often see in action roles, despite an eye-roll-worthy quote from Spielberg in a ’93 Rolling Stone piece claiming she “drives all the guys out of their minds.” Ellie’s signature look is simply an appropriate outfit for someone on a work trip in South America. Though both Alan Grant and Ian Malcolm are clearly attracted to her, Dern is only ever in awe of one thing: the spectacle of dinosaurs brought back to life. The story avoids the classic love triangle or even love interest tropes, carving out a unique role which seems oddly radical in the face of perennially shoehorned heterosexual romances.

One of the best subversions in Jurassic Park comes as an injured Malcolm is laid up in the back of one of Jurassic Park’s iconic jeeps, only to be chased by a terrifying T. rex. In the front of the car are bounty hunter Robert Muldoon and Ellie Sattler. After Muldoon is killed by a group of marauding raptors, it’s up to Ellie to turn the park’s electricity back on and save the day and also Malcolm’s life. It’s a brilliant reversal of the knight in shining armor story, which sees Jeff Goldblum take on the role of the damsel in distress.

Dern even has a brief moment as mentor to the film’s other female lead, Ariana Richards’ Lex, a shy aspiring computer programmer, whom Ellie encourages to hack the park’s computer system to keep out the raptors. In this moment the film also passes the Bechdel test as the two characters have a conversation that doesn’t revolve around a man and advances the story in a meaningful way. From her first appearance to the film’s last moments, Dern’s turn as Ellie Sattler is the beating heart of Jurassic Park, the human core. She’s a young woman who is just doing her job when she is thrown into an unthinkable circumstance, and now has no other choice but to survive. Because of her enduring, singular strength Jurassic Park will always be a classic.