Every week we  showcase a Kickstarter project that captures our imagination. Ardens Ludere‘s new Kickstarter, Dinosaur Princesses has fully funded and is in its homestretch until its November 13th project end. Here’s why we can’t get enough of it.

Many people got hooked on  Dungeons & Dragons when they wandered into a game store or bookstore right around the age of 10 and wandered out with a Player’s Handbook. D&D is a great gateway into the hobby but many of those kids are now grown with kids of their own. They’re looking for a game that easier to pick up and play with their kids. New Zealand designers Hamish and Dana Cameron are looking to create a game that will not just allow kids to create cool characters but draw and color them!

Dinosaur Princesses is a story game for all ages. Players choose what kind of dinosaur and what kind of princess they will be. Each character gets to add some words connected to the type of dinosaur they are and the type of princess. A Triceratops Astronaut, for example, might be Big, Armored, Smart and Brave. Players then draw or color their characters to finish creation. Meanwhile, the Paleontologist (that’s what the game calls the DM) selects a few story points and challenges to throw at the princesses. Everyone draws these story points on a map suitable for refrigerator hanging. 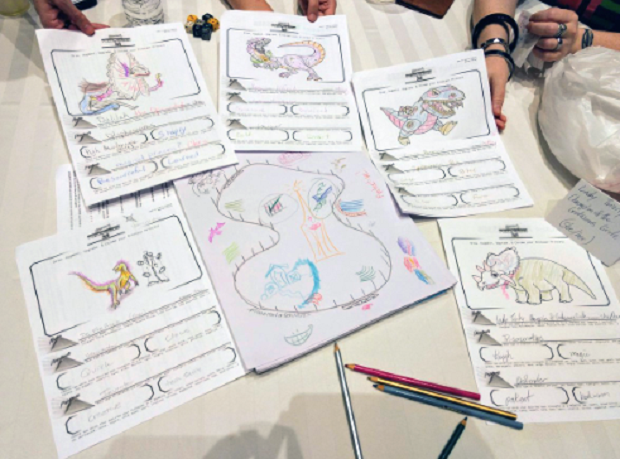 According to an interview with Brie Sheldon:

Dana: I can tell the story about how it became a colouring book! Hamish was already working on it, but I didn’t know much about it at the time. We were in a small bar in Wellington, NZ a couple years back and he was telling a friend about the game. He said he wanted the rules book to look like a kids book and that he was also thinking of the character sheets as something for people to draw and colour on. I made the logical leap and (probably) shouted, “THE RULES BOOK SHOULD *BE* A COLOURING BOOK!!!!!!”. I guess that was my first touch on the game. I didn’t really start working on it actively until earlier this year.

The game uses a dice pool system where the Paleontologist starts with a large dice pool and the princess starts with a small pool. They get more dice by asking the other princesses to help and the ones that do describe how they do it. It’s a game that encourages teamwork and imagination that also might appeal to grown-ups who want to be princesses…or dinosaurs.

Backers have a lot of options to support the game. It will be available in PDF so parents can print out coloring pages should the game prove popular. There are also options for fill print books, specialty dice and even options for backers experiencing financial hardship to still be able to play. The Kickstarter ends on November 13th. will you help the Dinosaur Princesses?

What’s your favorite dinosaur princess? Tell us in the comments!

Games for the kids!