KEYFORGE’s Uniqueness is its Greatest Strength

I’ll say it up front: KeyForge is one of the most exciting games I’ve played this year. It’s a two-player card game with a number of interesting twists, chief among them that no two decks will ever be the same. A KeyForge deck is not something you build; in fact deck construction is strictly against the rules. You play with what you get and you get what is assigned by an algorithm locked away somewhere in FFG’s manufacturing facilities.

KeyForge is a new card game by Richard Garfield-of Magic: The Gathering fame. It’s the first “Unique Game” from Fantasy Flight Games. Unique Games are so named because everyone’s copy is just a little bit different. In  Discover: Lands Unknown this is accomplished by varying the exact cards, tokens, and terrain types that come in your box. No two copies are the same. In KeyForge, our entire decks are different and two identical boxes will have two wildly different decks.

Inside your box will be 36 cards, 12 from three of KeyForge‘s six houses. You may – or may not – have duplicates. It’s almost completely random, though FFG has confirmed that some filtering occurs to ensure that a deck with a card that depends on Troll monsters will come packaged with a couple of Troll monsters. Other than that, your deck’s content is subject only to the whims of fate. There is no deck building allowed in KeyForge. 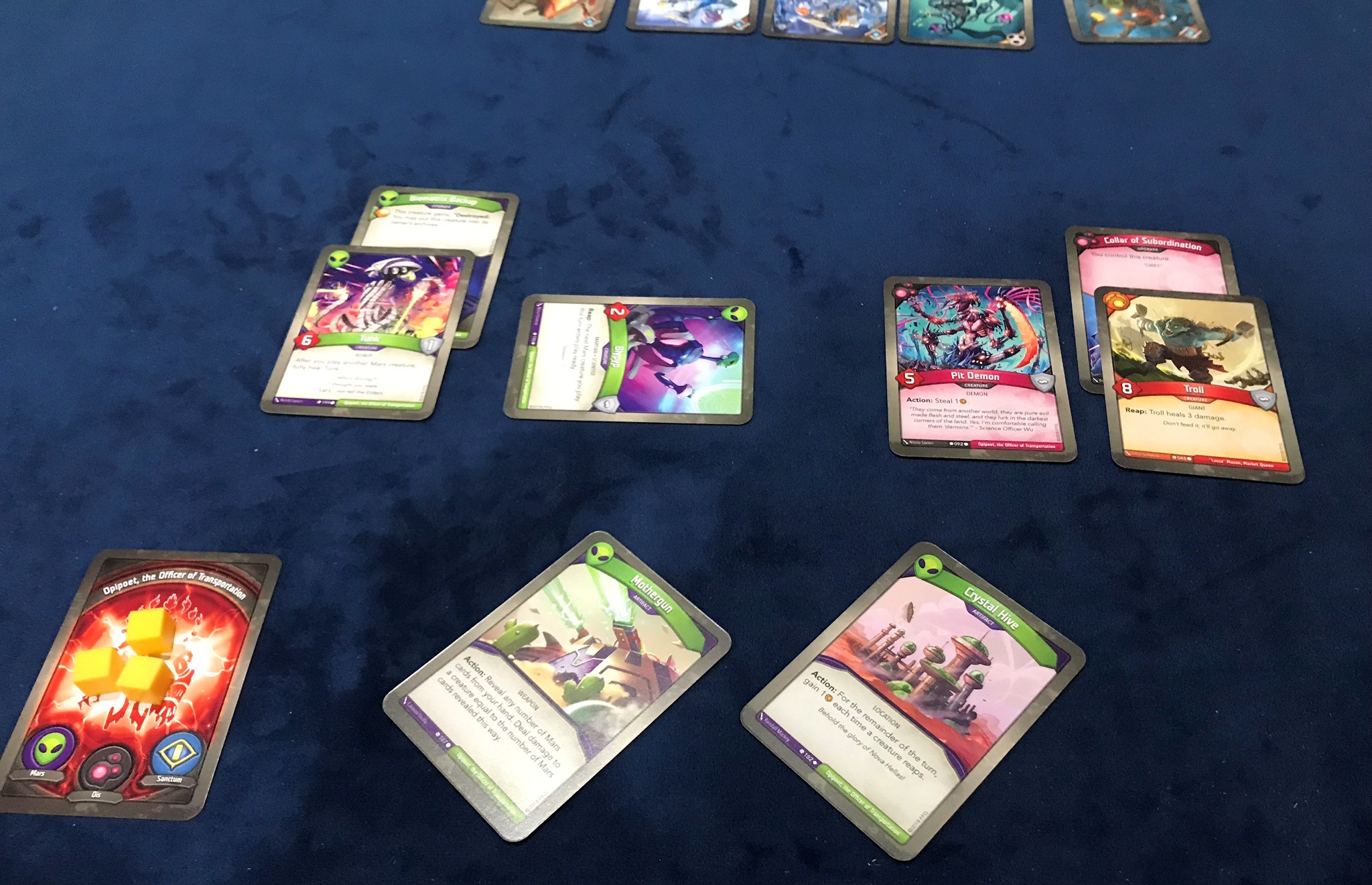 Unlike many heads-up card games, the goal of KeyForge is not necessarily to attack your opponent. Creatures play a huge role in board control and actions, but combat isn’t the star of the show. You win by being the first to forge 3 keys (KeyForge, get it?) out of a substance known as Aember. Some cards provide this resource directly, but the primary method of accumulating Aember is to have your creatures Reap in lieu of attacking. Taking an action with your creature exhausts them. If you Reap you can’t Attack and vice versa.  (You can see all the moving parts in our How to Play video.)

This turns creature combat into a form of tempo control. You don’t attack because that’s the point of the game, you attack because you think it’s the most effective way to slow your opponent down. Sometimes you may decide it’s better to Reap with everything you have. It won’t do anything to your opponent but may provide a stockpile of Aember and push you closer to victory. This makes for an interesting decision in a genre that tends to rely on some form of direct aggression.

As someone with a long history with games like Android: Netrunner and Legend of the Five Rings, this initially felt jarring. My instinct was to attack and I’d often find myself staring down at a tableau of powerful creatures wondering how I was losing. Changing the way I think about my board state has made for an exciting learning experience.

KeyForge is dramatically different in other ways as well. Each deck is made up of 3 houses, but only 1 house can be active on your turn. At the start of your turn you’ll declare a House. You can only play, activate, or discard cards of that house that turn. This is perhaps the most fascinating element of KeyForge’s game play. You’ll quickly identify synergies that can’t actually be activated, or find yourself deciding between a turn that uses all the neat creatures you’ve just put into play or one that sets up some Artifacts from another House. Figuring out which is the right House to use each turn is key to a winning strategy. 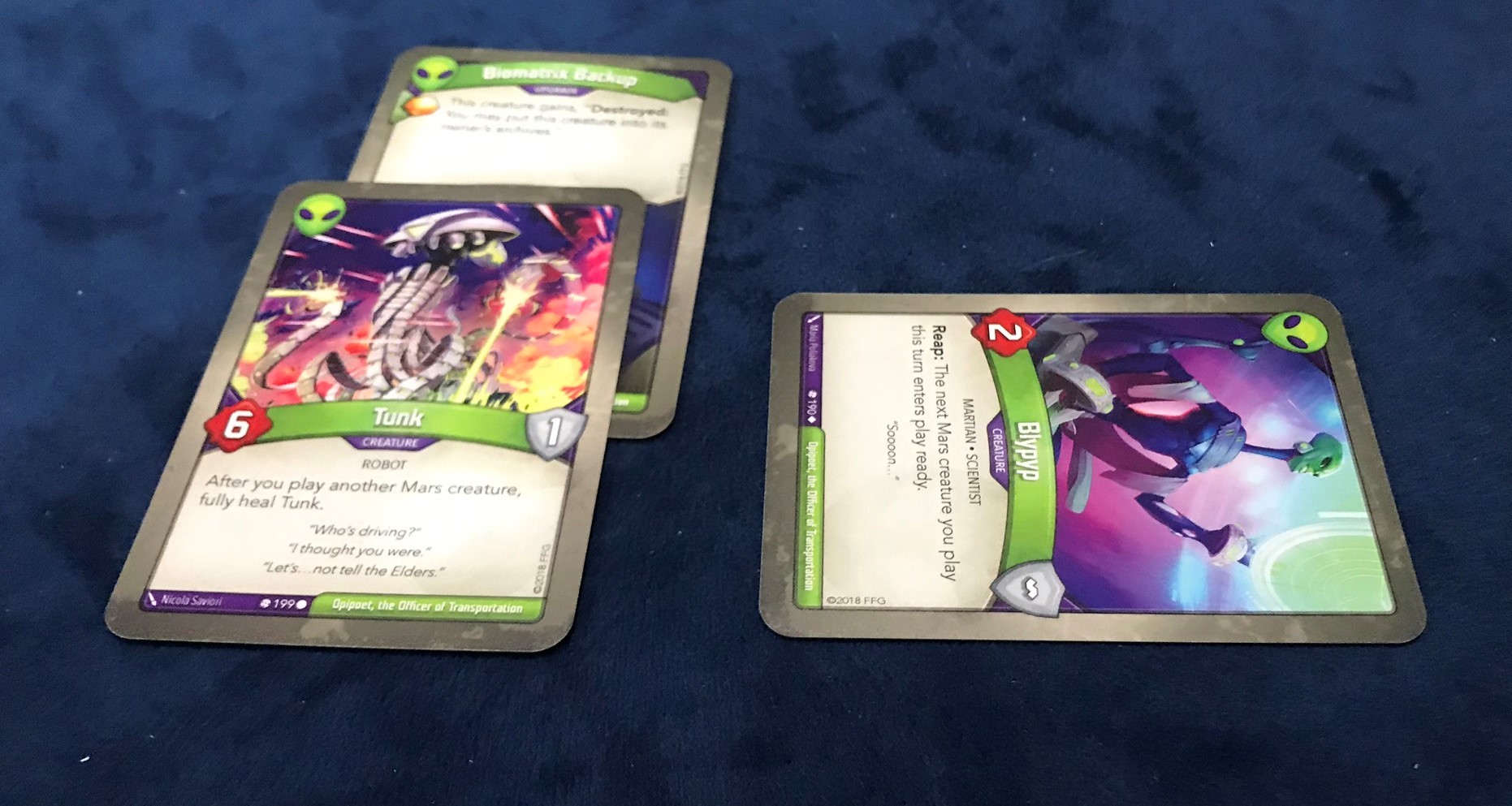 At first glance, the deck randomization and activation system can seem limiting. You can’t combine the cards you want and you may not  be able to play 2 cards you do own together. Again, this was jarring. Combos are present and evident but I can’t design my deck to bring them to bear. Opening a 2nd pack may reveal other cards that work swimmingly with cards in a different deck but I can’t combine them. Once I broke my mind of the habit to optimize and seek efficiencies I discovered a wholly new type of enjoyment.

Every time I open a new deck I feel like I’m exploring a new game. Even having a deck made up of the same 3 Houses feels different. Sure, the general theme of a house is present but it’s possible to not have any of the same cards. Even familiar cards may have to be played differently. One of the houses-Mars-has a powerful card that can be activated even if you’ve chosen a different House. It allows you to activate other Mars cards that turn. Its power level and usefulness varies wildly based on what else is in your deck. With one deck you may use it to bring a handful of creatures into play readied. In another you may be able to turn on a powerful combo normally restricted by the House system.

If KeyForge has an issue it’s the potential for someones random deck to be more powerful than yours. There is a built in system for handicapping strong decks, but it is a little cumbersome and won’t work for random plays at tournaments or conventions. It also means that you may get a deck that you simply don’t enjoy playing regardless of power level. Personally, I don’t mind either of these things. Abusive combos that players can specifically build imposes design limitations on a card pool.  Fixed decks also make for a robust trade economy. One FLGS in St. Louis is even letting customers swap decks at will.

The Unique Game idea is still in its nascent stages but so far the concept is promising. KeyForge’s unique deck system is exciting; it’s got the fun of cracking a new booster pack only the booster is my whole deck and I can immediately try something new. Decks aren’t expensive either, meaning that if you find me at a convention I’ll certainly have a couple on me ready to play. The simple-yet-deep mechanisms make for a game that is easy to teach and play, and the deck randomness ensures that games with new opponents are fresh. KeyForge is a winner and I can’t wait to see what they do with the system.