Katherine Johnson, the former aerospace technologist, has passed at the age of 101. She dedicated her life to mathematics and space exploration. During her lifetime, Johnson, who you may have heard of thanks to the movie, Hidden Figures, or her being awarded the Presidential Medal of Freedom in 2015, was able to simultaneously break down racial barriers and help launch astronauts into orbit, as well as encourage people to think not only thoroughly, but unconventionally. Now, with her death, Johnson’s bringing out the best in people once again, as evidenced by this snapshot of the reactions from the collaborators and organizations who knew her best, as well as the internet in general.

Taraji Penda Henson, who played Johnson in Hidden Figures, posted an early photo of the icon she portrayed, and helped to immortalize, to her Instagram. Henson’s post reads, in part, “Because of your hard work little girls EVERYWHERE can dream as big as the MOON!!! …. I will forever be honored to have been apart of bringing your story to life.”

Johnson spent 33 years conducting research for the National Advisory Committee for Aeronautics’ (NACA’s) Langley laboratory—NACA would become NASA in ’58—and the tribute video NASA Langley Research Center posted to its YouTube channel gives a rundown of some of her biggest achievements. And while it’s not especially sentimental, even a basic recap of what Johnson was able to accomplish against all odds is inspiring.

Theodore Melfi, the director of Hidden Figures, posted a picture of himself with Johnson and others to twitter, along with an anecdote giving insight into Johnson’s character. Melfi said that when he first met her, Johnson asked him why he’d want to make a movie about her, to which he replied “‘Because the world needs to know about you.'” To which she replied: “Well, I don’t want it to be all about me, there were so many woman [sic] that worked as hard as I did. They all deserve to be known.”

In 2018, Neil deGrasse Tyson dedicated a full episode of his StarTalk podcast to interviewing Margot Lee Shetterly, the author of the nonfiction book, Hidden Figures (as well as Janelle Monáe, who played Mary Jackson in the film adaptation). His tweet honoring Johnson’s passing reads, in part, “‘Hidden Figures'” reminds us that Computers & Calculators were smart women who knew math. In the early US Space Program, that math was orbital mechanics, led by Katherine Johnson 1918-2020. May the number of those inspired by her story be computationally incalculable.”

“Hidden Figures” reminds us that Computers & Calculators were smart women who knew math. In the early US Space Program, that math was orbital mechanics, led by Katherine Johnson 1918-2020. May the number of those inspired by her story be computationally incalculable. Godspeed. pic.twitter.com/BuMRxOHyQD

NASA re-shared a biography of Johnson, giving a brief, yet comprehensive overview of how she was able to go from one of three black students integrated into West Virginia’s graduate schools to the third African American to earn a PhD in mathematics to “computer” working on trajectory analysis for the first-ever human spaceflight, but what is perhaps the greatest highlight from her career is definitely worth a special aside. NASA writes:

“As a part of the preflight checklist, Glenn asked engineers to ‘get the girl’—Johnson—to run the same numbers through the same equations that had been programmed into the computer, but by hand, on her desktop mechanical calculating machine. ‘If she says they’re good,’ Katherine Johnson remembers the astronaut saying, ‘then I’m ready to go.’ Glenn’s flight was a success, and marked a turning point in the competition between the United States and the Soviet Union in space.” 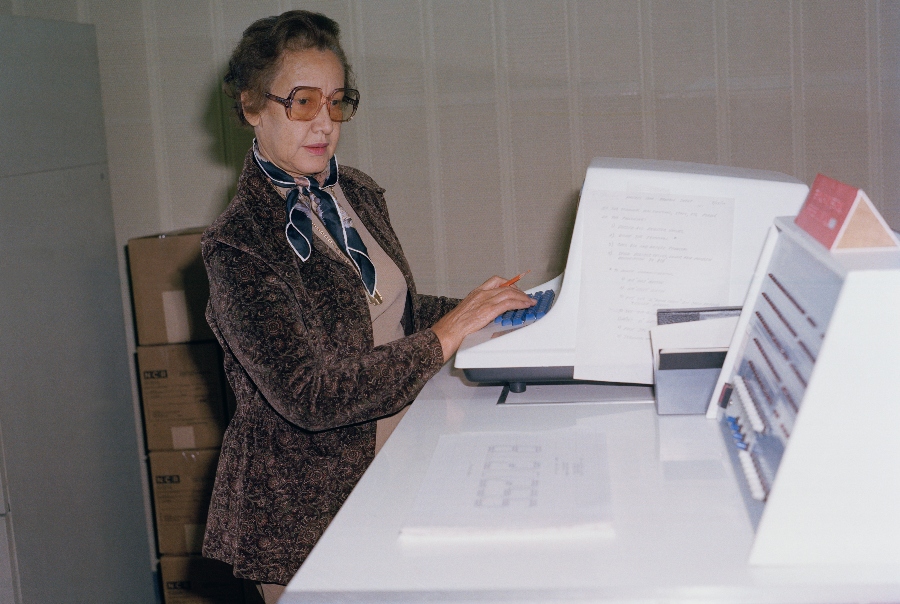 An image of Johnson at NASA Langley Research Center in 1980. NASA

And finally, a single tweet from twitter user, bletchley punk. And while bletchley doesn’t have any ties to Johnson—that we can glean, anyway—her sentiment that “Katherine Johnson was a badass mathematician to the very end” is impossible for us, or anybody else, to deny.

Katherine Johnson was a badass mathematician to the very end, waiting until age 101 so she would die in her prime

What do you think about Katherine Johnson’s passing? Did she affect your life in any particularly meaningful way? Give us your thoughts in the comments.