The review embargo has lifted, and it seems history is repeating itself, as the early word on director J.A. Bayona‘s film is mixed at best. Based on many reactions, the movie takes a turn into an almost haunted house style film; some critics loved that, but just as many seemed annoyed by the switch in tones. Chris Nashawaty at Entertainment Weekly gave the film a B+, which isn’t too shabby, but said “The less you try to dissect it, the more you’ll enjoy it.”

“Bryce Dallas Howard, thankfully, gets more to do than the last go round (and in combat boots, no less!), Pratt busts out his signature Indiana Jones cocktail of can-do heroism and deadpan sarcasm, and Bayona and his screenwriters (Trevorrow and Derek Connolly) test the laws of incredulity with varying degrees of success. At least, until the final half hour when forehead-slapping hooey finally win out. Up until then, Fallen Kingdom is exactly the kind of escapist summer behemoth you want it to be.”

John DeFore at The Hollywood Reporter also to enjoyed the film for what it was, saying “Fallen Kingdom ends with an act that is just about impossible to believe outside the context of a fiction that, like DNA, is driven solely by the need to replicate itself.”

“This is said to be the second film in a trilogy. But Fallen Kingdom’s closing scenes seem intent on something far bigger, like a Planet of the Apes-style saga that has barely begun. You don’t remake reality in a film’s final frames without intending to milk things for as long as the public will keep buying tickets. If future installments are this rich and exciting, that’s probably going to be a while.” The Village Voice’s Bilge Ebiri is less effusive, saying Fallen Kingdom is still better than the first Jurassic World, and yet still somehow not very good.

“Don’t get too excited, though. Even that idea — dinosaurs in a mansion! — doesn’t get explored in any truly involving way. There are missed opportunities all over Fallen Kingdom. “

Matt Singer at ScreenCrush suggests all logic in this franchise has gone out the window, saying “I don’t know if I’ve ever seen a character in any movie do something as dumb as several of the things the characters in this movie do — and I wrote a whole piece ranking the dumb characters in the first Jurassic World”

“Connolly and Trevorrow’s script can’t decide whether dinosaurs are beautiful creatures worth saving, or monsters who must be destroyed at all costs, and the result is a deeply confused movie about the wonder of nature — and also about what it looks like when an indoraptor bites the hand clean off a man’s arm.”

Digital Spy’s reviewer Matt Chapman seemed to dig the film’s turn from a typical mega summer blockbuster into something more akin to a slasher film. He also makes a comparison to another beloved sci-fi franchise, saying “At this point the Jurassic franchise also fully mimics the tropes of the Alien movies: genetics gone mad; corporate dark dealings; near unstoppable (but extremely photogenic) killer creatures. All that’s missing is an android with questionable ethics.”

“Over familiarity also means the expected horror uptick doesn’t pay off – particularly given the high number of last-minute reprieves. The initial joy of Fallen Kingdom’s action extravaganza is tempered by the smaller-scale feel of its second half, even as a strong ending suggests another evolution in this storyline. All of which balances out into a perfectly enjoyable franchise entry – just one that lacks the bite of previous outings.”

Over at Den of Geek, writer David Crow asks “How do you continue a profitable franchise when, for the story to progress, characters need to make stupid decisions?”

“The fifth Jurassic Park movie, a film that is aware that the nostalgia keg that gave plentifully to the last several entries in the franchise runs the risk of tapping out—so it preemptively scrapes the bottom of the barrel for narrative ideas that include exploding volcanoes and velociraptors rummaging around a haunted house like they’re Christopher Lee.” 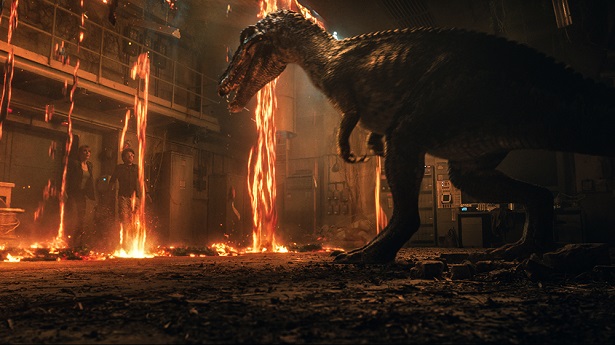 Emma Stefansky of Uproxx is more positive, saying “there is a little bit of the wonder and joy that made the original so special embedded deep within Fallen Kingdom, which I credit to Bayona, whose primary drive, even in genre fare like this, has always been to sprinkle just enough emotion into the stories he tells.”

“The dinosaurs in Fallen Kingdom do look much better than the ones in Jurassic World, though it still kills me that these movies have utterly sacrificed the slow menace of practical-effects creatures for ones that move fast but are completely made up of pixels. One thing I will say: Fallen Kingdom, unlike Jurassic World, really gets how much we love the dinosaurs that have become familiar to us over the years.”

And Owen Gleiberman of Variety “didn’t find any of this stuff especially fun.”

“At certain points you may find yourself ticking off the themes. Greed gone rampant among the globalized gilded class? Check. The sinister potential of genetic engineering? Check. The need to protect endangered species? Check. The privatizing of military action? Check. The eerie implications of cloning? Check. The danger of weaponized dinosaurs? Check.”

Sounds like a lot of the reaction to the first Jurassic sequel twenty years ago, although I would say somewhat better than that. Are you still interested in making a return trip to Isla Nublar? Let us know in the comments.

More of the latest movie news!