In case you’ve been living in a cave, Netflix produced an original series called Black Mirror – a cultural phenomenon of short stories that showcases worrisome scenarios that are a product of our relationship with technology. Nosedive, the first episode of the third season of the show, starred Bryce Dallas Howard in an episode that imagined how social media perpetuates an image of life as a utopia, while the people who project that constructed appearance themselves are living in a dystopia, created by those very same social media platforms.

Asmodee has just published a game based on the episode and appropriately titled after the namesake episode. Mechanically, it incorporates worker placement, set collection, as well as a digital app to plunge players into the world of Nosedive. The game is accessible and approachable – it’s as easy to jump into and learn as hitting “next episode” when you’re binge-watching your favorite show. You can actually see exactly how easy with this How to Play video from Becca Scott:

The thematic elements hit you off the bat: Players select which experiences they’ll reveal or hide (with cards displayed face up or face down), much like filtering which experiences they show publicly on social platforms. They have to know how to play to their audience so they can pick the best experiences to assign to each of their opponents so they can garner the most thumbs ups. They also have to try to game the system by currying favor of the players with higher social scores so they can climb the social ladder themselves – those players are the ones who experience ratings most impact your social rank.

Collecting experiences is part of the game, but if your social ranking isn’t high enough to have those experiences count towards the endgame scoring, it’s all for naught, and that makes Nosedive’s app-driven experience mechanic the engine of the game.  The design is deliberate and thoughtful – using an app in the game (complete with selfie-supported features) is a stroke of genius that immerses players in the social-media, mobile-device driven world of the episode. The app’s mechanics incentivizes players to themselves internalize the motivations of the social ranking-obsessed from the show, if only for the sake of winning the game.  They’ve translated the universe of Nosedive, where those with the highest reputation scores have more opportunities and thus “win” at life, to game mechanics, where a player’s social score ultimately offers them more scoring opportunities and therefore more chances to win. 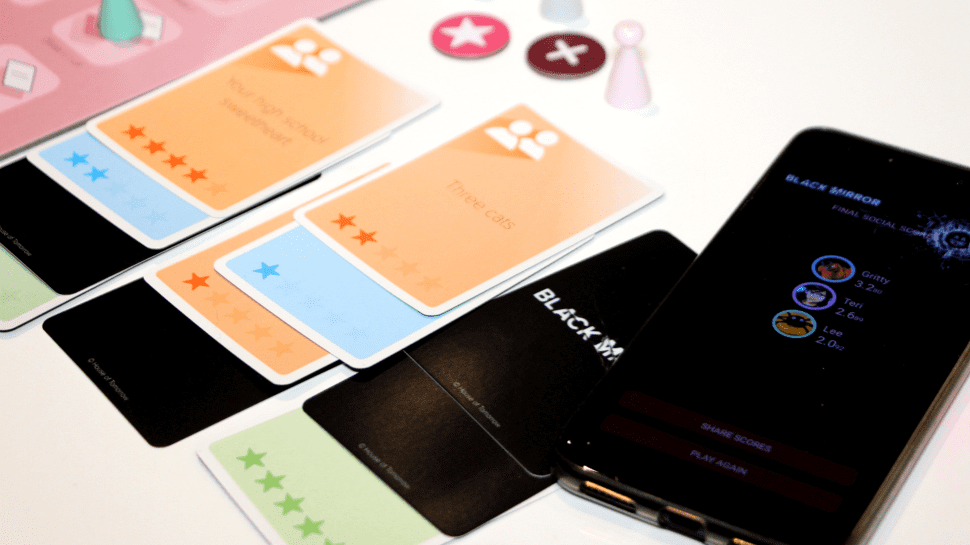 The truly remarkable thing is that Nosedive combines game genres that would normally seem incongruent. On the surface, it’s a fun, social sharing game that can drive light and humorous conversation through the app and the assignment of experiences. At the same time, it might well have some of the most cutthroat game theory mechanics – it’s both harsh, yet fitting.

Because of the theme, fans of Black Mirror are sure to enjoy the game, filled with references to both the namesake episode of the game, as well winks and nods to other episodes in the series. At the same time, gamers who love strategically interesting social games will find Nosedive compelling, whether or not they have a Netflix subscription. Don’t let the simple and straightforward mechanics fool you: playing Nosedive is a  deceptively sophisticated experience, filled with strategic options and makes room for complex game theory crafting.

You can see how the whole game plays on this episode of Game the Game:

Pick up the game  online here and don’t forget to post a selfie when you get it!

Teri Litorco is Geek & Sundry’s contributing editor, author of  The Civilized Guide to Tabletop Gaming(a survival and etiquette guide for gamers), and a  YouTuber who can be found on social media:  Twitter,  Facebook, and  Instagram. Don’t forget to give her a like & thumbs up.